Equal to one-tenth of its human population, approximately 95,000 dogs roam the streets of Kathmandu-a number that only grazes the surface of a growing public health issue in Nepal and other countries in South Asia, according to the World Health Organization.

While currently absent in the U.S., the canine strain of rabies, a brain infection transmitted by a virus in the saliva of infected dogs, kills more than 100 people each year in Nepal, which is among the poorest and least developed countries on the planet. Human rabies in India and Nepal account for more than 50 percent of all deaths from the disease in the world, according to Veterinarians Without Borders.

"In the U.S., our perspective is limited, due mainly to the fact that the canine strain of rabies was eliminated in 2007, after a successful campaign encouraging people to vaccinate, spay and neuter their pets," says Gretchen Kaufman, J76, V86, director of the Center for Conservation Medicine at the Cummings School of Veterinary Medicine, who has been working to eliminate rabies in Nepal since early 2001. "So while it seems to no longer exist [in more developed regions] for many countries this is still a really big deal."

In Kathmandu, dogs that have owners and what Kaufman identifies as "community dogs," which are generally fed by the community, returning the favor by sticking around and providing some guard services in the form of barking.

"No one takes direct responsibility for these dogs, that is enough to be willing to pay for things such as vet bills," Kaufman says. "In addition the actual owned dogs-for example a shop keeper's dog-will hang out on the stoop, mixing it up with the community dogs. It is often difficult to tell them apart and the interchange-including diseases and reproduction- is an important factor in this issue."

Wildlife veterinarians at the Cummings School have worked to control rabies in animals such as raccoons by distributing oral vaccine baits, including a successful 15-year campaign along the canal that separates Cape Cod from mainland Massachusetts. So when Kaufman's student, Leslie Bienen, V01, approached her about doing a rabies control project in Nepal, Kaufman came on board, initially thinking the oral baits might help control the feral dog population in Kathmandu.

The veterinarians in Nepal were primarily focused on cattle and other livestock, which is usual in most developing countries, because those animals feed people, Kaufman says. "So the students were not being taught spay or neuter procedures at the local veterinary schools, a procedure that involves major surgery. Most of the vets there were uncomfortable with doing it, so they didn't promote it."

Since her first visit to the Nepalese capital of Kathmandu in 2001, Kaufman says she and her students have been working with government and humane organizations on rabies control awareness and have also built up intensified training in the spay and neuter program in the government-run veterinary school. The training is based on the Cummings School curriculum, in which each student performs four or five surgical sterilizations before graduating. In Nepal, though, the team worked on also getting the community engaged on the importance of a spay/neuter program to control disease.

Most recently, Kaufman has been working with third-year veterinary student Mehnaz Chumkee Aziz, who spent time in Nepal in summer 2009, researching the possibility of sterilizing the feral dogs without surgery, instead using a pill or injection. This summer she investigated similar issues in Bhutan, a landlocked South Asia nation at the eastern end of the Himalayas. 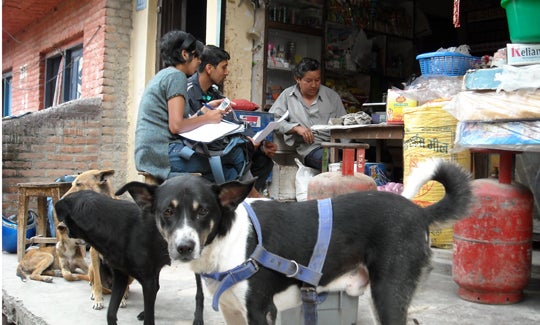 "As soon as the drug companies have something safe and viable, Nepal would be a great location to try this out," Kaufman says. "It's really something that is going to change the world in terms of rabies outbreaks and dog welfare," she says. In Nepal, where the average income is $340 a year, according to the World Bank, "the cost of surgically sterilizing a dog is huge," Kaufman says, roughly $20 an animal. "We are looking for something that will cost less than $2."

Judging from the information Aziz gathered in talking with community members, veterinarians and officials in Nepal, implementing a large-scale canine sterilization program will be a challenge.

"There were so many people who told me that they didn't know that you could spay or neuter an animal," Aziz says. "They either didn't know that animal health professionals existed, the cost was too much or they couldn't get to a clinic where the procedure is performed. There was a definite lack of public awareness."

Aziz also learned that charlatan practices have made some Nepalese suspicious of non-surgical sterilization. "In certain parts of Kathmandu, people who aren't veterinarians have been giving dogs Depo-Provera," a short-term contraceptive approved for use in humans, to render animals temporarily sterile, she says. Many of the dogs suffered uterine infections, which required surgery, she says, and some of them died.

Back at the Cummings School, rabies awareness has taken center stage as students and faculty prepare to host the 2010 Merial World Rabies Day Symposium on September 25 at the Boston/Westborough Doubletree Hotel, an honor given to the student chapter of the American Veterinary Medical Association with the largest attendance at the previous year's event.

Past symposiums have been very North American-based, Kaufman says, but this year they plan to extend their reach to places like Thailand, Nepal, Africa and Iraq, where veterinary students have submitted YouTube videos to showcase their work from afar.

"We are honored to have been selected to host the Merial Rabies Day Symposium this year," Aziz says. "Our goal is to pull together a diverse audience and encourage them to take action to eradicate rabies throughout the world."

"Rabies is not a new sexy disease," Kaufman says. "One thing that we have struggled with is that some of these older diseases that haven't been conquered don't get very much funding. But it is a very serious concern, and there is still a lot of work to be done around the world."