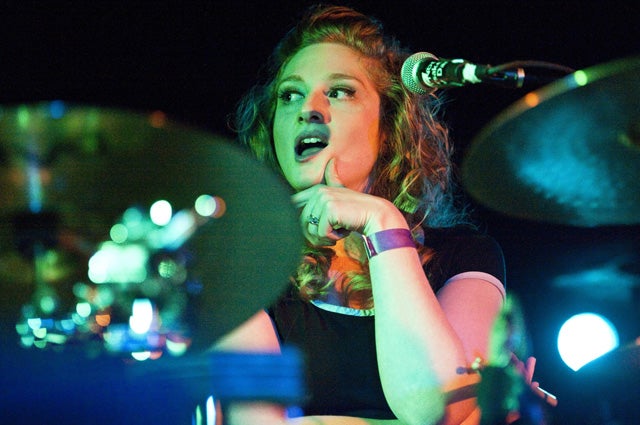 By day, Sophia Cacciola sits behind a desk as a secretary at Tisch Library. By night, however, you are liable to find her sitting behind a drum kit on stage at one of Boston's local rock clubs, belting out lyrics such as "Your lips curl out from your face / like they got something to prove."

Just call her a double agent. Cacciola and her husband, Michael J. Epstein, comprise the band Do Not Forsake Me Oh My Darling, but theirs is not just another rock act. Everything about the band-the songs, their outfits, even the name-ties back to an old British spy show called The Prisoner.

The series, which has maintained a cult following despite running for just 17 episodes from 1967-68 , tracks a former British secret agent who is kidnapped upon retiring from his position and held captive in seaside village."The band is not based on it, but it is influenced by it," explains Cacciola.

Two years ago, Cacciola and Epstein-who met in her first band, Blitzkrieg Bliss-were looking for a project to feature his bass playing with her drumming and vocals. At the time, they were watching a lot of British spy shows, like The Avengers, Danger Man (called Secret Agent in the U.S.) and The Prisoner.

Cacciola was drawn to the "dark, moralistic" main character in The Prisoner and the mod 1960s aesthetic of the show. She and Epstein felt they could adopt it as the identity for their band, which derives its name from the title of the show's 13th episode. (It also happens to be the name of the song played during the opening credits of High Noon).

Do Not Forsake Me Oh My Darling aims to record one song for each of the show's 17 episodes. Their first EP, The New Number 2, tackles episodes 1, 2, 3, 4 and 9, plus a cover of Leonard Cohen's "First We Take Manhattan." With only drum and bass, the band has what Cacciola calls "a full, weird sound that people aren't used to hearing." That's also partly owed to Epstein playing his bass through a guitar rig.

"I actually love it because it's very deep and low," says Cacciola. While Cacciola has played guitar in the past, this is her first time fronting a band as both vocalist and drummer. "The drums have been a really interesting difference," she says. "I have been a very rhythmic singer all along and less melodic, so the drums allow me to push that further."

When Cacciola sits behind her bright red drum set, placed right at the front of the stage, she strikes a commanding pose. Wearing a mod black dress with white piping, she has removed both her glasses and her shoes (for more effective pounding of the bass drum).

Cacciola's vocals shift from shouted to whispered to snarled, while she continues to pound away on the drums as Epstein's riffs grind alongside. The performance is punctuated by knowing glances into the audience that help perpetuate the sense of paranoia that characterized "The Prisoner."

She admits that her Tufts colleagues may not recognize her on-stage persona. 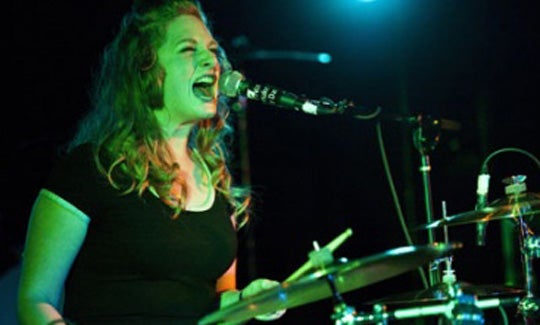 "It's kind of a theater thing," Cacciola explains. "I am here and and I am going to yell, and I am not looking at my shoes, I am looking at the crowd. People who meet me see that character, who is very loud and moved by the music, but I am normally very reserved."

That said, Cacciola says the climate at Tufts is conducive to having a second life as a rock star. "Because it is a university, everyone is open to what you are doing," she says.

'The Cycle of Art'

Cacciola is no stranger to the Boston music scene. She moved here from a small town in the Finger Lakes region of New York directly out of high school in 2001 and threw herself into the local music community. She started on the folky, acoustic side of things, performing in open mics around town, but her time spent working in area CD stores began influencing her taste. Soon, she shifted to punk and "whatever genre of art rock," as she says, her current band is.

While their songs are inspired by "The Prisoner," fans don't need to have heard of the show to enjoy the music--though they have made a few converts.

"They like the songs for what they are and that is the point, because the songs have to stand on their own," explains Cacciola. "The 'Prisoner' people are excited, too, because we are reviving this." The revival goes beyond the music. Cacciola and Epstein have spent the past year indulging their interest in visual media by working on a video recreation of the show's three-minute opening sequence, right down to finding someone with a Lotus 7 kit car similar to the one driven in the show.

The video will be screened in April at the annual Portmeiricon -- a convention for fans of "The Prisoner" in the village of Portmeirion, Wales, where it was filmed. While the show enjoys cult status in the U.S., it's a major phenomenon in Britain.

"I have gotten these emails from people saying, 'I can't believe how respectful you are being for doing every scene exact," says Cacciola. "I think they are just excited that we are keeping it alive."

Cacciola sees her band's current focus on "The Prisoner" as being part of the "cycle of art."

"People ask, ‘how do you write about a TV show?' It's the same creative process," she says. "It is so easy to take those ideas, and you know they were inspired by something, and then take them into a new medium. I see art as always being inspired by, and pushing someone else. So, something I do will push someone else."