Is antifreeze no longer a worry for pets in Massachusetts?

Unfortunately, no. Although there are less-toxic coolants and antifreezes than those containing ethylene glycol, the new law in Massachusetts does not mandate the utilization of those safer chemicals.

Instead, it requires that commercially sold antifreezes contain a “bittering agent,” which does not make the antifreeze any less poisonous. But it does turn the normally sweet-tasting liquid bitter, so that pets and kids might stop drinking it before consuming a toxic amount.

The law also only applies to commercially sold antifreeze, not the kind that gas stations and repair shops buy in bulk—something to keep in mind if you have your radiator flushed or filled professionally. 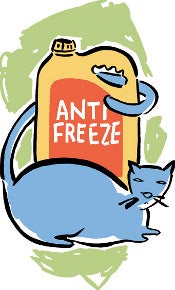 Illustration: Ward Shumaker
Ethylene glycol isn’t actually toxic to cats and dogs until their bodies begin to metabolize it. But if the early stages of antifreeze ingestion are missed or go untreated, crystals form in pets’ kidneys, causing acute, long-term damage. Only a few teaspoons can lead to kidney failure.

If you suspect your pet has ingested antifreeze—symptoms mimic human behavior after too much alcohol—head immediately to your local veterinarian, who will induce vomiting and use charcoal solutions to prevent absorption of the antifreeze into the gastrointestinal tract. He or she may start by delivering an antidote intravenously or referring your pet for hemodialysis to remove the toxins. Speed is absolutely critical to successful treatment.

Do you have a question for Ask the Expert? Send it to senior news editor Taylor McNeil.