In a boon to poorer countries, researchers create new ways to store and deliver life-saving inoculations

Since the advent of vaccines, childhood mortality has declined dramatically in industrialized nations, but not in many other parts of the world. That’s because traditional vaccines require continuous refrigeration to keep them potent, clean needles and trained health-care professionals to administer them and money or medical insurance to pay for them. In developing nations, these requirements are significant roadblocks to protecting children from some of the most common infectious diseases, such as measles and polio.

At Tufts, a team of researchers led by Abraham “Linc” Sonenshein, a professor and acting chair of molecular biology and microbiology at the medical school, and Saul Tzipori, a professor of microbiology and infectious diseases at the Cummings School, are developing a new vaccine delivery system to overcome those barriers and have published two studies outlining their achievements in successfully inoculating mice against tetanus and rotavirus, which causes severe diarrhea, by using genetically engineered bacteria as a delivery vehicle. If this method works in humans, it could open the door to inexpensive, heat-stable, needle-free vaccines. 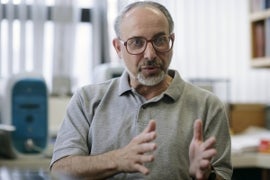 “We’re very hopeful that our approach will generate many inexpensive vaccines that don’t need refrigeration, needles or trained personnel for delivery,” says Abraham “Linc” Sonenshein. Photo: Melody Ko
“It’s an alternative approach to vaccination that may be more effective in some parts of the world than existing vaccines,” says John E. Herrmann, a research professor in the infectious diseases division at the Cummings School of Veterinary Medicine.

Vaccines protect us from illness by introducing little bits of pathogens—not enough to make us sick, but enough to provoke the immune system. The immune system reacts by developing antibodies, disease-specific proteins that will identify and attack the pathogen the next time it enters the body. Antibodies recognize a pathogen by the specific proteins, molecular calling cards known as antigens, it wears on its surface. But high temperatures can damage those antigen proteins, meaning vaccines must be kept refrigerated to remain effective. In much of the developing world, where constant electricity isn’t a given, that’s not always possible.

To overcome that challenge, researchers from Tufts School of Medicine and the Cummings School have genetically altered a common bacterial species, Bacillus subtilis, to manufacture antigen proteins. When introduced into the body, this harmless bacterium will stimulate the immune system to develop antibodies.

B. subtilis is a ubiquitous soil bacterium which, under environmental stress, will go dormant, taking the form of a tough spore capable of withstanding extreme heat, acidity and salinity. It’s well-studied, easy to genetically manipulate and grows quickly in the lab.

“This would be a very low-cost vaccine,” says Sonenshein. “We expect it wouldn’t cost more than pennies per dose.”

As Safe as It Is Effective

In a study published in the journal Vaccine in August 2010, the scientists describe how they genetically engineered B. subtilis to express a fragment of tetanus toxin protein either on the surface of the spore form or inside the cell in its active, non-spore form.

Both forms of the engineered bacteria, when delivered by nasal drops, proved to be highly effective in protecting mice against the tetanus toxin. Moreover, after being freeze-dried, both forms of the bacterial vaccine remained potent for 12 months at more than 100 degrees F. The vaccine appeared to be as safe as it was effective, with the scientists finding no side effects or any evidence of B. subtilis infecting any other tissues in the mice.

In another groundbreaking experiment, the team engineered B. subtilis to express a rotavirus antigen. Rotavirus is the leading cause of severe diarrhea in infants and young children worldwide, killing an estimated 500,000 children each year.

While the non-spore form of the engineered bacteria failed to induce protective immunity against rotavirus in mice, the spore form proved to be effective when combined with an additive that enhanced the immune system’s response.

“We were the first ones to induce immunity against a virus this way,” says Herrmann, the senior author of the second study, published in the November 2010 issue of the journal Clinical and Vaccine Immunology.

If at First You Don’t Succeed

The findings came just five years after the Tufts team, collaborating with scientists from Boston University and Tulane University, began work on the project with a $4 million grant from the Bill and Melinda Gates Foundation.

Things as complicated as vaccine development don’t always work as planned, though. Back in 2005, the researchers envisioned engineering B. subtilis to express the antigen on the surface of the cell in its non-spore form and then inducing the bacteria to take its spore form in the laboratory. That heat-stable spore could have been stored indefinitely and shipped around the world. When mixed with a liquid and consumed, the researchers hypothesized, the spore would germinate in the gastrointestinal tract, releasing active cells, which would express the antigen protein, into the body.

“Almost every aspect of that plan turned out not to work,” says Sonenshein, who notes the spores didn’t germinate well in the digestive tract.

So the scientists eliminated that step in the process by designing the bacteria to express the antibody on the surface of the spore itself. Since the bacterial spore is administered via nasal drops instead of orally, the cell avoids the digestive tract and the antigen comes into immediate contact with the immune system.

Having demonstrated the delivery method’s efficacy, now the team is ready to partner with new funders and manufacturers to prove the tetanus and rotavirus vaccines are not toxic in animals other than mice. Even though no toxicity was observed in the first experiments, the FDA requires additional studies before the team can begin clinical trials, the multi-stage testing for safety and efficacy in humans.

“Everything about vaccines is unpredictable,” says Sonenshein, who has just been named a fellow by the American Association for the Advancement of Science for his work with bacteria like B. subtilis. “But generally, if it works in two animals, the chances are very good it will work well in humans. We’re very hopeful that our approach will generate many inexpensive vaccines that don’t need refrigeration, needles or trained personnel for delivery.”