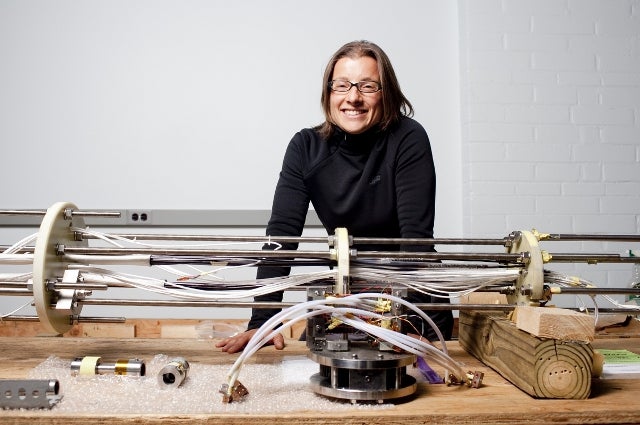 When most people think about using the sun’s energy, they envision dark solar panels quietly soaking up rays. But scientists such as Luisa Chiesa at the School of Engineering see another way to harness the power of the sun—by recreating it, in small doses, here on Earth.

To do that, they plan on building large-scale fusion power plants. In those plants, hydrogen will be superheated—as it is on the sun—until the electrons separate from the nuclei, resulting in hot plasma. That will yield helium—and massive amounts of heat energy to drive steam turbines. Controlling the plasma, which will be a toasty 270 million degrees Fahrenheit, requires powerful magnets, made up of coiled superconducting cables. Chiesa’s research centers on improving the function of these cables.

“You want the plasma to go in circles so you can keep extracting power,” a function of the magnets, says Chiesa, an assistant professor of mechanical engineering who recently received a $750,000 early career award from the U.S. Department of Energy. Extracting as much power as possible, as efficiently as possible, is crucial for a fusion reactor to surpass “break even,” the elusive stage where more energy is created by the fusion reactions than is required to sustain them.

Small-scale fusion experiments have been built before, but in 2007, work began in southern France on the first large-scale fusion reactor, called ITER, which is being funded jointly by the European Union, the United States, Japan, India, South Korea, Russia and China at a projected cost of 10 billion euros over the next 30 years.

The magnets that will coil around the super-hot reactor core will have to be extra cold, about minus 450 degrees Fahrenheit, to stay superconductive. The temperatures are extreme—and so are the magnetic fields necessary to do the job. The ITER reactor, for example, will require an extraordinarily strong magnetic field, which can only be achieved using superconducting materials with near-zero resistance to electric current.

The magnetic cables are about an inch and a half wide and contain about 1,000 wires, each of which in turn are made of several thousand filaments of an expensive composite metal. From the wire’s perspective, Chiesa says, “conditions are harsh” inside those cables. The powerful magnetic field, along with the twisting and bending of the cables, put tremendous strain on the wires, which can imperil their superconductivity.

Chiesa’s research mission, backed by the Department of Energy grant, is to enhance the durability of these superconducting wires, which are initially cooked in a furnace for a few weeks at more than 1,200 degrees Fahrenheit before being chilled with liquid helium. The heating is necessary to form the superconducting material, which is very brittle, says Chiesa. “They become very sensitive to the strains and current load” that would exist inside a fusion reactor, she adds.

To investigate the properties of these wires, Chiesa, along with four graduate students including Phil Mallon, G11, and Makoto Takayasu, a research scientist at MIT’s Plasma Science and Fusion Center, test their limits under several types of strain, looking for the exact moment when the wires lose superconductivity.

Using a full-scale superconducting magnetic cable for research would be way too expensive; Chiesa estimates it would cost about $300,000 for just one experiment. The solution is to reduce the size of the cable from 1,000 strands to three or four and then scale up the results.

For testing the current load and many of the physical strains, “these wires don’t know they’re not in a 1,000-strand cable,” Chiesa says. The big exception is the magnetic field. To simulate what those three or four strands would deal with in full-sized cable, she and her team make semi-annual trips to the National High Magnetic Field Laboratory in Florida.

On their most recent trip last August, they spent several days testing four wires, each about four inches long. These were long days, starting at 5:30 a.m. with the gradual cooling of the wires with liquid helium, inside a vessel called a cryostat. Then, from about 7 a.m. to 4 p.m., the researchers ran current through each wire, one at a time, gradually increasing the amperes, while bending the wire.

A sudden spike in the voltage required to push the current through the wire is a sign of increased electrical resistance, Mallon explains. “What we’re looking for is the critical current when the wire starts losing its superconductivity. This current decreases as we increase the strain applied,” he says.

After returning to Boston, the number crunching begins so that the findings can be published and presented to other researchers and the handful of companies that manufacture superconducting wire. Meanwhile, Chiesa and her team are already at work designing new experiments for their next trip south.

“Development in this field takes a very, very long time,” Chiesa says. “Superconducting materials are a very niche product. The drive to make big improvements is related to new projects like ITER.”

In addition to controlling plasma in a fusion reactor, improved superconducting cables could one day replace the much-less-efficient copper wires that support our electric grid. They could also store energy created by remote and intermittent sources, such as wind farms.