Provost’s tenure at Tufts marked by innovation and collaboration 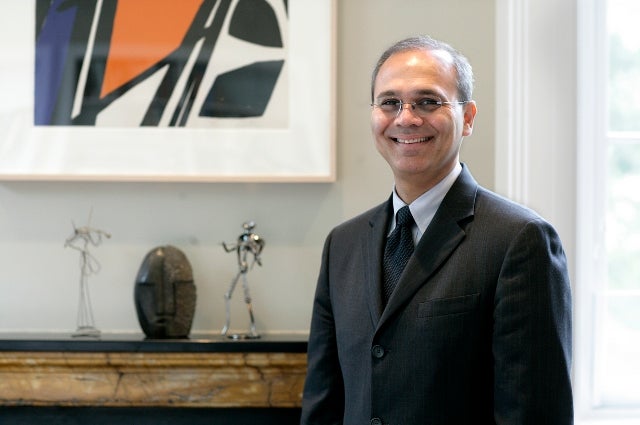 Jamshed Bharucha, Tufts’ provost and senior vice president since 2002, has been appointed president of the Cooper Union for the Advancement of Science and Art, the 150-year-old all-honors college in New York City. He begins his new job on July 1.

Noting that Cooper Union had made “an outstanding choice” for its twelfth leader, Tufts President Lawrence S. Bacow said in a statement to the university community that Bharucha has helped raise Tufts’ “intellectual profile by setting high standards for the recruitment of distinguished deans and faculty, and of exceptionally talented students.”

Among the signatures of Bharucha’s tenure are innovative interdisciplinary programs that have become part of the culture of Tufts and initiatives that have made the university a more desirable destination for graduate study.

Working in concert with the school deans, Bharucha led the strategic planning initiative that outlined the priorities for the Beyond Boundaries campaign. Faculty, students and staff on all three campuses have been the beneficiaries of the provost’s “advocacy for investment in our physical plant and research infrastructure” achieved through the campaign, Bacow said.

Bharucha, a cognitive neuroscientist whose research has mined the ways the brain perceives music, was a key player in creating the $27 million Perry and Marty Granoff Music Center, which opened in 2007 and has made Tufts more attractive for students interested in studying music in a liberal arts environment.

“As a musician, I am particularly pleased that we have created a structure that affirms artistic expression on its own terms,” Bharucha, who plays the violin, has written of the music center.

The provost also has leveraged Tufts’ global profile, working to establish partnerships with Mexico, India and China that serve students and faculty and help forge ties with alumni living overseas.

In a statement to the Tufts community, Bharucha said, “While I will be sad to leave, I do so with the satisfaction that together we have brought Tufts to a new level—brimming with confidence and proud of our distinctive place in higher education. Tufts will always have a special place in my heart because of its unique ethos of public service, its people—among the most authentic I have met—and the great things we have done to advance teaching, research and service to humankind.”

Before coming to Tufts, Bharucha had been at Dartmouth for 19 years, as a teacher, scholar and administrator. From the beginning, he sought to encourage and promote interdisciplinary programs at Tufts. “Interdisciplinary contact, if done well, does not exclude the disciplines but takes full advantage of what they have accomplished,” he said in a 2002 interview.

Under Bharucha’s stewardship, multidisciplinary teaching and scholarship have flourished. Notable innovations have included the Summer Scholars Program, which gives undergraduates the opportunity to pursue substantive research in partnership with faculty at all the schools, and the University Seminars, which bring together undergraduate and graduate students, scholars and researchers to work on big social and global issues, such as the links between human and animal disease and water and diplomacy.

“We are a far more integrated university today because of Jamshed,” Bacow said. “He helped knit our schools together through his support of a variety of innovative programs.”

To enable Tufts to recruit top-flight graduate students, Bharucha introduced the Provost’s Fellows Program, which provides a $5,000 supplement to students’ stipends for the first two years of graduate study, and the Graduate Competitiveness Initiative, which since 2005 has strengthened Ph.D. education through an annual $1 million allocation that brings stipends for doctoral students into parity with those of Tufts’ peer institutions.

Bharucha said he remains focused through June “on the important work still to be done at Tufts,” including the completion of the $1.2 billion Beyond Boundaries fundraising campaign, and is committed to ensuring a “seamless transition.”

Bacow said he will appoint an interim provost later this semester, and that Tufts President-elect Anthony P. Monaco, who begins his tenure on August 1, plans on conducting a national search for a permanent provost. Bacow said he would consult with Monaco on the selection of the interim provost, who will assume office on July 1.

“The Cooper Union has had many distinguished presidents over the course of its history,” said Vartan Gregorian, president of the Carnegie Corporation of New York and the former president of Brown University. “The choice of Jamshed Bharucha as the twelfth president of this historic institution is a bold and imaginative move. At a time when our nation needs more interdisciplinary and multidisciplinary research and teaching, the Cooper Union has reached out to a pioneer in bridging fields of study and engaging international communities,” he said.

Bharucha will succeed George Campbell Jr., who had announced that he would step down in 2011 after leading the institution since 2000. Bharucha will be formally introduced to the Cooper Union community on Tuesday, February 8. The announcement will be webcast live at 10 a.m. at www.cooper.edu.