How does fluoride strengthen teeth and why add it to the public water supply?

People of all ages benefit from fluoride in both their toothpaste and drinking water. While the amount of fluoride a person uses should be tailored to factors including age, stage of growth and development and risk for dental decay, scientific evidence indicates that optimum levels of fluoride in drinking water can reduce cavities by 30 percent.

Since fluoride was first added to municipal water supplies in 1945, there has been a significant decline in tooth decay and tooth loss in the United States. But when children ages 8 and under are exposed to too much fluoride, they can develop what is known as dental fluorosis, which causes white speckling or pitting on tooth surfaces.

And in 2007, the Centers for Disease Control reported a marked increase in fluorosis in American teens since the 1980s.

To address the potential for over-fluoridation, the U.S. Department of Health and Human Services and the Environmental Protection Agency in January proposed changes in the recommended amounts of fluoride in public water supplies—lowering the level from a range of 0.7 to 1.2 milligrams per liter of water to 0.7 milligrams per liter.

The current scientific consensus is that public water fluoridation is safe and effective, and the proposed change in recommend levels simply takes into consideration other possible sources of fluoride to which children are exposed today. 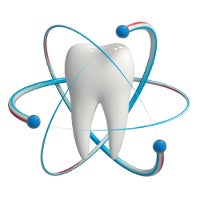 When fluoride becomes incorporated in teeth, it makes the enamel more resistant to demineralization, preventing the decay process. Illustration: iStock
Fluoride’s anti-decay mechanism is well established. Tooth decay occurs when certain types of bacteria found in dental plaque break down dietary sugars and produce acid. These acids can dissolve tooth enamel and dentin, which is directly below the enamel, by leaching calcium and phosphate minerals from these hard tooth tissues. This process—called demineralization—eventually causes cavities. When fluoride becomes chemically incorporated in the tooth, it makes the enamel more resistant to demineralization, thus preventing the decay process.

Many toothpastes contain fluoride, which the teeth absorb during brushing. But for some patients who are at high risk for decay, including children or those with chronically dry mouth, using a fluoride toothpaste might not be enough. When added to drinking water at a concentration of one part per million, fluoride ions bathe the teeth when they are secreted in the saliva.

The spike in the prevalence of fluorosis could be a result of the proliferation of fluoridated products on the market today: over-the-counter toothpastes and rinses, fluoride supplements and topical treatments applied during dental visits.

The new federal recommendations take these other sources of fluoride exposure into account while attempting to balance its decay-fighting benefits against the risk of fluorosis.

One complicating factor is that Americans now drink nearly 3 billion gallons of bottled water each year. Because different brands of bottled water vary in fluoride content, some people may not be consuming protective levels of fluoride. In addition, some water filtration systems eliminate most of the fluoride in the water. For example, while carbon filtration does not affect fluoride levels, a reverse osmosis system can remove as much as 95 percent of fluoride from water.

Too little fluoride increases the risk of tooth decay, and more than half of all children develop cavities before age 11. Dentists and physicians should evaluate the fluoride intake of children and discuss with their parents or caretakers ways to ensure kids are getting the appropriate amount of fluoride.

Submit your question to Ask the Expert.