From South America to the subcontinent, they make their mark in the field as Fogarty International Clinical Research Scholars 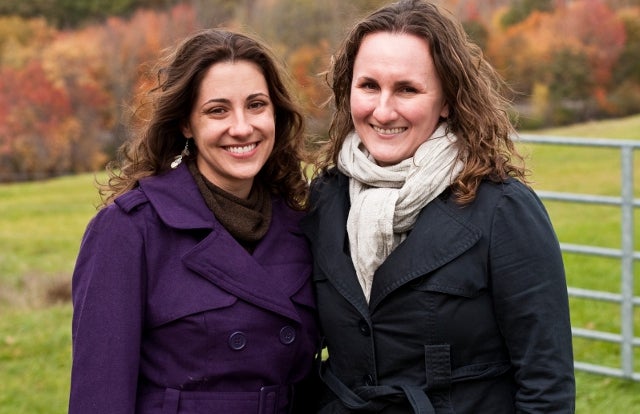 Every year, the nation’s graduate students in the health sciences compete to become Fogarty International Clinical Research Scholars. Designed to position the next generation of health-care leaders to advance public health worldwide, the program traditionally has been the sole province of medical students.

That is, until three years ago, when Elliott Garber, V09, MPH09, became the first U.S. veterinary medical student selected to participate in the highly competitive program, created by the National Institutes of Health (NIH) in 2003.

Of the six U.S. veterinary medical students who have been selected as Fogarty Scholars, four have come from the Cummings School of Veterinary Medicine, and a Cummings alumna is one of only three veterinarians in a Ph.D. program to have participated.

The Tufts-incubated Fogarty Scholars have formed a support network to encourage more students to follow in their footsteps. This kind of work is critical for the long-term health of both humans and animals, says Joann Lindenmayer, V85, an associate professor of environmental and population health at the Cummings School.

“Humans do not live in a vacuum,” says Lindenmayer, who mentors students interested in seeking a Fogarty. “Public health needs to consider both animals and the environment.”

Between 20 and 30 Fogarty Scholars—less than a quarter of those who apply—are chosen each year to conduct research at an NIH-funded center in a developing country. Before they head off on their 10-month international assignments, the scholars spend two weeks at the NIH campus in Bethesda, Md., for orientation and intensive training with an entire cast of international researchers.

“Orientation is one of the best parts of the Fogarty experience,” says Jennifer Zambriski, J00, V06, who participated as a Ph.D. student from Cornell University and recently visited the Cummings School to encourage Tufts students to apply. “You look around and realize you’re completely surrounded by the leaders of international global health institutions who are now suddenly your peers,” she says.

On the Ground in South America

Zambriski’s Fogarty research took her to South America last year. Under the mentorship of Robert Gilman, of Johns Hopkins University, she studied Brucella melitensis in the milk and blood of dairy goat herds in Peru and Bolivia to assess the prevalence of the bacterium that causes brucellosis, a highly contagious disease that humans contract by consuming unpasteurized milk or cheese from infected animals. In addition to producing chronic illnesses, including recurrent fevers, joint pain and fatigue, brucellosis can lead to miscarriage in women. 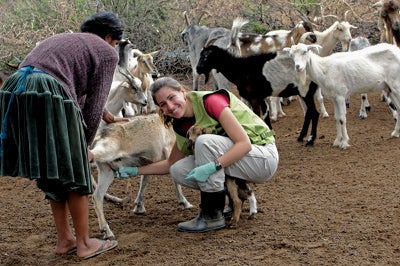 Jennifer Zambriski draws milk from Bolivian dairy goats during her research.
The chance of miscarriage from brucellosis “can be as high as 43 percent in the first and second trimesters, which is scary—and something we would never tolerate in the U.S.,” says Zambriski. “So why is it OK if it’s [happening to] poor people in Peru?”

Now working part-time as an emergency veterinarian in upstate New York, Zambriski is studying Cryptosporidium parvum, a water-borne pathogen that causes severe gastrointestinal distress, as part of her doctoral work in epidemiology and international agriculture at Cornell.

As the first U.S. veterinary medical Fogarty Scholar, Elliott Garber shipped off to Vellore, India, to investigate gastrointestinal infections that are transmitted between animals and humans. Working with researchers at Christian Medical College, Garber explored how diseases that originate in livestock and wildlife affect humans in communities where people live in close quarters with animals.

Miranda Hillyard, a 2009–10 Fogarty Scholar, credits Garber with inspiring her to apply. She went to Peru to study Chagas disease, which affects upwards of 11 million people in Central and South America and can lead to heart disease. The parasite that causes Chagas, Trypanosoma cruzi, is transmitted to animals and humans by the kissing bug, a big blood-sucking insect.

“People who are infected with Chagas disease often do not get sick until 10 to 20 years after they are exposed to the parasite, but then they go into heart failure,” says Hillyard, V11. “It’s often not diagnosed, because even if you die in your 40s of heart disease, it’s not something commonly linked to an infectious disease.”

Hillyard also worked with Gilman, of Johns Hopkins, in collaboration with the Universidad Peruana Cayetano Heredia, the premier medical school in Peru, on gaining a better understanding of how the disease spreads. In Arequipa, the second largest city in Peru, Hillyard tested for the Chagas parasite in dogs and in guinea pigs, which most rural households raise for food, to determine why the disease exists in some households, but not in neighboring ones.

The project team also was the first to document cases of Chagas in northern Peru. “We took trucks and hiked to five tiny villages where there were only between seven and 60 households and no electricity, running water or sewage,” says Hillyard. “We attempted to sample blood from everyone in the community,” she says. This year Fogarty Scholar Karen Alroy, A05, V12, is continuing Hillyard’s work on Chagas. 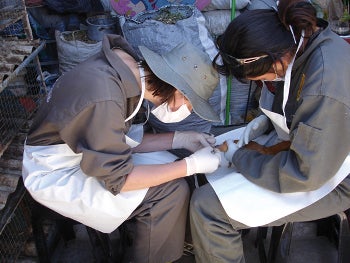 Karen Alroy, A05, V12, left, takes a blood sample from a guinea pig in Peru.
Also in Peru on a Fogarty this year is Marieke Rosenbaum, V12, who is investigating the black-market sales of New World monkeys, small- to mid-sized primates that are kept as pets in rural parts of Central and South America. Working with Joseph Zunt, a global health physician at the University of Washington, Rosenbaum will collect saliva, feces and hair samples from the monkeys and the people who buy and sell them to determine the ways in which diseases such as tuberculosis and viruses that affect the digestive tract are passed between species.

Best of the Vets

Taking a year off from veterinary school to pursue global health work has opened doors for Tufts students, says Lindenmayer. “Our students have been wildly successful with applying to Fogarty, and the program has set them on career paths that would not be possible otherwise,” she says.

The international experience has already advanced Zambriski’s career. She was invited to present her Fogarty research at the International Congress on Infectious Diseases as well as related work on a new laboratory culturing method at the annual meeting of the American Public Health Association. And she was just awarded a two-year fellowship from the National Science Foundation to study Cryptosporidium parvum in East Africa.

Zambriski and the other Fogarty Scholars pursuing veterinary careers are, in turn, boosting the profile of the profession, says Lindenmayer. “Veterinarians currently constitute less than 1 percent of the staff at national public health organizations like the NIH, Centers for Disease Control and the FDA,” she says. “Our students represent the very best of the profession. The more of them who get into programs like Fogarty, the more public-health leaders will get to know them and come to appreciate and involve veterinarians for the breadth of their experience and perspective.”

This story first appeared in the Winter 2010 issue of Tufts Veterinary Medicine magazine.