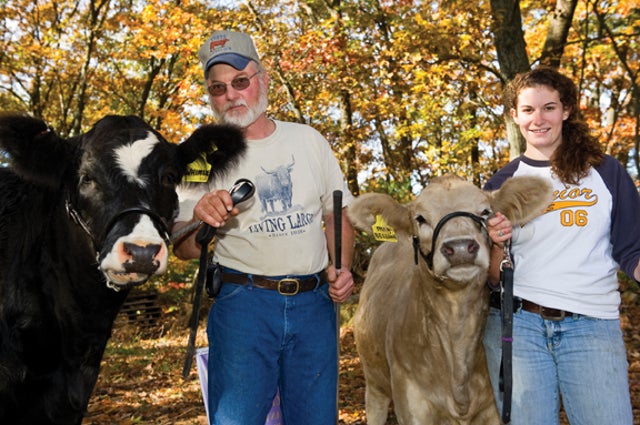 The Tufts farm team knows a thing or two about quality livestock. Two of the veterinary school’s cows won prizes this fall at the largest fair in Worcester County.

Maybelline, a nine-month-old Simmental/Charolais heifer that was bred and raised on the Grafton campus, was chosen as Champion Beef Cross at the Spencer Fair Beef Show. Not to be outdone, Whimsical, a 20-month-old purebred Simmental heifer that was purchased as a calf from Simme Valley in New York, was crowned champion in the All Other Breeds class and took home the show’s top award: the Supreme Champion Trophy for the best beef heifer. Whimsical bested 65 other bovine competitors for the title.

Cummings School herdsman Scott Brundage has been entering animals in beef cattle shows for 15 years because, he says, it’s a great way to showcase the skills of Tufts’ veterinary students.

“The best part of showing cattle is what it does for [the school’s] reputation among the other exhibitors in the barn,” Brundage says. “Some shows have as many as 160 head, and when those farmers and herdsmen see our students comfortable and confidently working cows, they realize that Tufts turns out great cattle vets. Some vets may know how to fix a cow, but a great vet knows what makes one tick, too.”

Farm worker Katlyn Tice helped show Tufts’ cattle at the Spencer Fair and also put on two demonstrations for the 4-H youth groups there. Tice joined Tufts this past summer, after graduating from Penn State, where she competed nationally on the university’s livestock show team.

Brundage praises Tice’s skill at fitting, which is grooming cattle to show off their build versus the breed standard. “Fitting is an art. It really takes a certain eye and a good hand with a set of clippers. See how her hair looks like crushed velvet?” says Brundage, pointing to Maybelline. “And look how straight the line of her back is.”

The two prize-winning cows will remain at Tufts to pass on their fine genes. Whimsical was due to calve in February, and Maybelline will be bred to calve during the spring.