As the eat-local movement grows, newbie farmers head to school to learn their ABCs 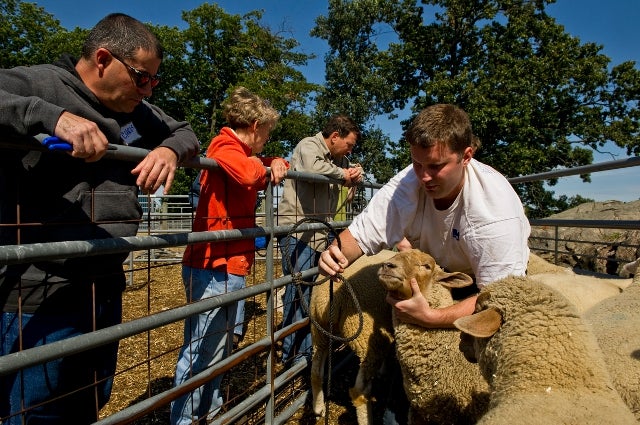 Twenty-five people clutching notebooks eagerly crowd into the deep shade of a farm shed, where Scott Brundage is demonstrating a judo-like maneuver that will set a sheep on its rump. The technique, known as sheep tipping, is a basic of herd management, allowing farmers to trim the animals’ hooves and check them for disease.

“Tipping sheep is not about muscle or strength. It’s all about balance,” notes Brundage, the herdsman at the Cummings School of Veterinary Medicine. On this sunny fall afternoon, his students are participating in Sheep School, one in a series of Livestock Field Schools. (More sessions are planned for this summer and fall.)

“First, you grab them here and here,” Brundage instructs, gently taking a ewe’s chin in his left hand, while wrapping his other arm around her side to grip her belly. “Now position your right knee against her side. Turn her head away from you until she is really leaning into your right leg. Now take that leg away!”

The sheep topples onto her side, where she remains, quite calmly. Brundage bends over, grabs the ewe’s front legs and pulls her back until she is resting on her haunches between his knees. “From this position, you can trim the hooves,” says Brundage, showing the students how to wield their clippers.

After a few attempts that result in the sheep circling around him, Patrick McQuade, a registered nurse from Rutland, Mass., gets tipping down pat.

McQuade discovered Sheep School while surfing for information on how to care for some Wensleydale lambs he had purchased. “You can only read so much on the Internet,” he says. “Nothing beats hands-on instruction from actual professionals.”

McQuade decided to raise lambs after seeing Food Inc., a documentary about corporate farming. “I figured, at least this way, I’d know that the animals I eat were well cared for,” he says. “I only work three days a week, so I have time to try farming on the side. So far, I love it.”

As the eat-local movement inspires people to think long and hard about where their food comes from, more folks are turning to raising their own meat and eggs. These backyard farmers usually start off knowing next to nothing about animal husbandry—which is why, for the last two years, the Cummings School has offered the field schools through the New Entry Sustainable Farming Project, a nonprofit training program for newbie farmers run by the Friedman School of Nutrition Science and Policy at Tufts. New Entry also partners with Community Teamwork, a nonprofit in Lowell, Mass., that helps low-income people become self-sufficient. 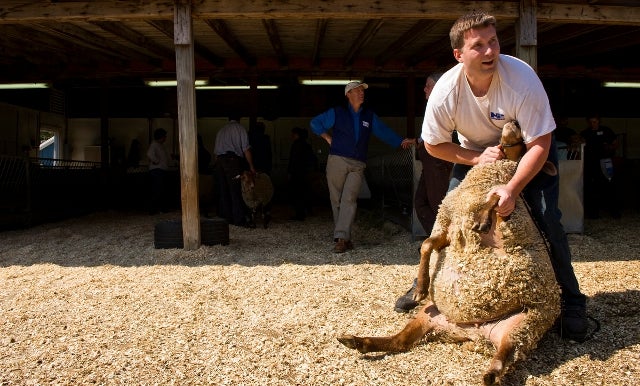 Patrick McQuade masters the art of tipping sheep. Photo: Alonso Nichols
Sheep tipping works because the animals possess natural defense mechanisms against predators. “She is feeling pretty good right now,” says George Saperstein, professor and chair of environmental and population health, of the tipped sheep. “When sheep are taken down by a prey animal like a wolf, their brains release endorphins so they will have a pain-free death.”

However, those same kinds of instincts often make it difficult for novice farmers to judge a sheep’s well-being. Standing out from the herd, say by looking lethargic or thin, attracts the unwanted attention of predators. So sheep evolved to blend in by not betraying any signs of discomfort or disease.

Consider, for example, the barber pole worm. This microscopic stomach parasite can drain a sheep of a deadly amount of blood before causing any overt symptoms, even as the animal suffers from severe anemia.

At this session of Sheep School, Rosario Delgado-Lecaroz, V97, a farm veterinarian in Upton, Mass., demonstrates a new technique, known as the FAMACHA anemia guide, for sussing out the presence of this potentially fatal parasite. Each attendee receives a plastic card featuring high-resolution photographs of sheep’s inner eyelids in five possible shades of red. Delgado-Lecaroz then leads the students in comparing sheep eyelids against the take-home color charts to look for the paler reds that indicate anemia.

“The goal is not to rid a flock entirely of parasites,” says Delgado-Lecaroz, noting that over-zealous de-worming of sheep has led to parasites that are now resistant to some of the drugs that control them. “The goal is a productive flock that can tolerate a reasonable level of parasites.”

Anecdotal evidence points to an increase in backyard farming in Massachusetts—particularly the number of families keeping laying hens.

“In the last two years, we have received significantly more phone calls seeking information about how to keep chickens,” says Michael Cahill, director of the Division of Animal Health within the Massachusetts Department of Agricultural Resources. “We are getting lots of calls from towns that haven’t traditionally allowed poultry but are looking into it because they are getting so many requests from interested residents.”
From 2005 to 2008, the state saw the number of properties with 12 or fewer chickens grow by 300 households, and the total number of chickens statewide jump from 7,000 to 9,000 birds.

The state has yet to notice an increase in the number of people raising other livestock, including pigs, cattle and sheep. But, Cahill says, “We recognize poultry as being a gateway species. The people who were ahead of the curve and keeping poultry years ago may now be moving into sheep, goats and other production animals. We certainly have heard from more people who are interested in learning how to butcher four-legged animals for personal consumption, and they may already be raising meat animals.”

Although Americans eat just a quarter of the lamb they consumed in the 1950s, according to the U.S. Department of Agriculture, sheep might be the livestock animal best-suited for a revival in Massachusetts. “Back in the 1800s, [sure-footed] sheep were the most predominant animal in New England because of the rocky terrain,” says Saperstein. “Just look at all the towns that sprung up around textile mills here.”

More obstacles stand in the way of backyard swine farming, as many towns have specific rules banning that species, notes Cahill.

On the Right Hoof

The New Entry Sustainable Farming Project initially focused on vegetable production, but “over the years, more and more people told us they were interested in raising livestock,” says Jennifer Hashley, G05, the program’s director.

After searching for other organizations offering startup training in livestock production, Hashley discovered that such educational opportunities did not exist in Massachusetts and were rare elsewhere in New England. She decided to add a meat-production component to the New Entry program and soon identified the Cummings School as the ideal partner.

“The veterinary school obviously lends itself very well to hands-on learning, as it already has livestock on the property, as well as knowledgeable faculty and staff,” Hashley says. “We also wanted to help beginner farmers make connections to veterinary care services and understand when it’s appropriate to bring in a vet,” says Hashley, who raises chickens, pigs, sheep and rabbits in Concord, Mass., with her husband, Peter Lowy.

Saperstein says that getting farmers started off on the right foot with animal care is the veterinary school’s primary motivation for offering the livestock schools. “For the last 30 years or so, there hasn’t been enough basic information about raising livestock available for new farmers,” he says. “So when I was a practicing farm veterinarian, it was not uncommon to see animals with serious man-made health problems because their owners had little idea what to feed them to meet their nutritional needs or how to properly vaccinate or de-worm them.”

The secondary focus of the field schools is on helping farmers achieve financial sustainability. For starters, local farmers need to learn how “to go back to using the grass that we have” to feed their livestock, says Saperstein. “The biggest cost to a meat producer is feed, and New England has the highest grain costs in the country because it has to travel so far to us,” he explains. “Using grass more efficiently is the first step toward economic viability for our farmers.”

Ten classes have been offered so far through the Livestock Field School series, which has received funding from the U.S. Department of Agriculture to offer the workshops. Classes have covered preventive care, handling, nutrition, feeding, breed selection and reproduction for chickens, cows, pigs and sheep. Other workshops have tackled pasture management, rotational grazing, fencing, direct-market opportunities and meat processing.

In addition to faculty and staff from Tufts, workshops have tapped industry experts, including breeders, chefs, representatives from the USDA and its Natural Resources Conservation Service and extension service staff from the University of Massachusetts in Amherst, Penn State University and the University of Connecticut. To date, 372 would-be farmers from all over the Northeast have attended a Livestock Field School.

Jana Dengler, the director of facilities and security at Boston’s Institute of Contemporary Art, and Maryanne Reynolds, an assistant attorney general for the Commonwealth, have gone to field schools on poultry, swine, cattle, pasture management and direct marketing since purchasing their home with 110 acres in Petersham, Mass., last May. The married couple has 12 cashmere goats and two dogs to protect their livestock. They hope to add yaks to the mix this winter and plan to someday venture into raising poultry for eggs, meat and breeding stock.

The livestock schools “are great foundation classes,” says Dengler, who ran a farm for four years in her 20s. “You come away with a good understanding of what the animals are like and their care and feeding requirements, as well as how to find a market for your product before you go ahead and invest money in buying 200 chickens. Not too many people have been raised on farms anymore, and the classes are especially good at getting people who have never handled an animal before comfortable with it.”

“Because we both work full-time off-farm, time is a precious resource,” says Reynolds, who appreciates networking with other attendees, who often have valuable experiences and information to share.

While New Entry stands ready to help those who choose to move forward with raising livestock after participating in a field school, sometimes success means preventing people from jumping in over their heads.

Peter Kracke, E05, E08, a chemical engineering research scientist, attended Sheep School on a fact-finding mission. His family is exploring options for inexpensively mowing pasture they own in northern New Hampshire, and at first, sheep seemed a sound strategy, especially given the potential income stream from raising lambs.

However, because of what he learned in Sheep School, Kracke has revised that game plan: “Sheep School, though a lot of fun, helped me figure out that it’s not feasible for us to raise meat animals [ourselves].”

The experience did not dampen his desire to use the land for agriculture. Kracke says he is working on convincing his family to apply to the New Entry Farmland Matching Service as landowners seeking farmers.

See “Five Things to Consider” about what to take into consideration before taking on livestock.