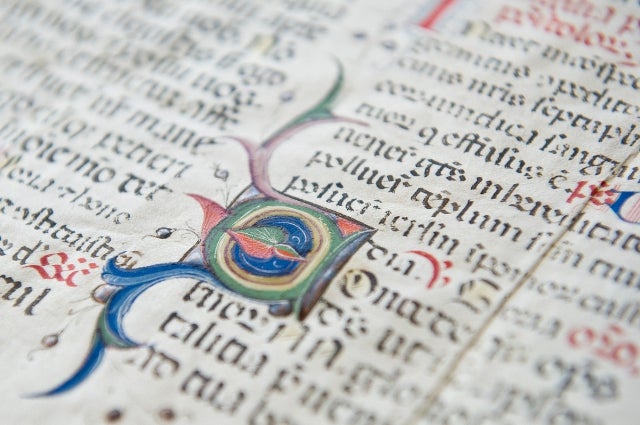 About six centuries ago, an Italian scribe painstakingly lettered and illuminated a page of a missal, a book containing prayers and instructions for the celebration of the Roman Catholic Mass. His work was not unlike that produced by thousands of other scribes who worked with ink and parchment throughout Western Europe during the Middle Ages.

The identity of that scribe is long lost; indeed, the rest of that particular missal may be long gone. But this surviving leaf, now housed at Tisch Library, has become witness to the way in which modern technology is giving new life to manuscripts and books from long ago. It’s also an example of the way in which scholars—in this case, classicists—are approaching their disciplines through a new lens, and of the new ways that undergraduates in the humanities can participate in primary research.

Not to mention this: the 15th-century artifact is also part of a Tufts mystery.

The page from the missal is among 32 handwritten manuscripts and printed pages that were discovered in the rare book stacks of Tisch Library nearly three years ago. The sheets, dating from the 12th to the early 20th century, were loose, enclosed between unbound book boards, the stiff material used to make book covers. They were uncataloged and completely unaccounted for in library and university records.

“We have no idea of the provenance of this material,” says Christopher Barbour, the humanities bibliographer and coordinator of special collections at Tisch Library. “They literally turned up in a stack of many uncataloged volumes. We were surprised.”

The discovery is all the more remarkable considering the age and size of Tisch Library. Usually such material is found in much larger libraries, or ones that amassed their collections in earlier times, when rare books were more modestly priced, Barbour says.

The material includes pages from antiquarian Bibles and tracts on history and science, among them a 16th-century anatomy book.There are even pages from two notable late 19th- and early 20th-century British publishers, the Doves Press and the Kelmscott Press.

After conservation efforts to clean and better preserve the pages, the works—which are now known as the Tisch Miscellany—were digitized, and can be viewed on a website created by Alexander May, the rare books cataloger for Tisch’s technical services department. On the site, the material is catalogued in a way that facilitates scholarly research, says Mays. Documents that had been inaccessible, in some cases for centuries, are now available to students, scholars and the curious around the world.

A New Tool in the Classroom

Not long after the collection went online, it also became the focus of a research and teaching project by Marie-Claire Beaulieu, an assistant professor of classics in the School of Arts and Sciences. She is teaching a course in medieval Latin this semester, and her students are using the actual and the virtual materials in a translation project.

“My students are transcribing and translating the documents, and also writing commentaries and essays about these transcripts,” she says. It’s not just a class assignment: the material the students create will be posted online alongside the Miscellany. By using the electronic versions along with the originals, the students are getting a closer look at the pages, whose handwritten texts are sometimes difficult to decipher.

“They are very excited about the idea that they are part of this effort at firsthand research,” says Beaulieu.

The project allows Beaulieu to show students how classicists do research. “This is an opportunity to show them it’s possible to do professional-grade research as an undergraduate in the humanities,” she says.

“Their translations will not only enrich our understanding of the material, but will also impact the creation and refinement of the elements used to describe the materials, which are then indexed by Google,” says May. “That in turn should lead to a wider academic audience via the search engine.”

Classicists have been using computer-based technologies since the early days of the digital age. One of the first digital libraries of the classics, launched in 1987, was the Perseus Project at Tufts, a compilation of material about the Greco-Roman world. “Classics as a discipline is reinventing itself now,” Beaulieu says. “This is a widespread trend in the humanities.”

The collection is being used for other teaching purposes as well. In February, Alisha Rankin, assistant professor of history, who is teaching a course titled History of the Book, brought her class to examine fragments from the collection. “In the past, she had to take her students to Harvard in order to study such material,” Barbour says.

The unbound folios containing the mystery leaves were found during a reorganization of the oversize rare books stacks at Tisch Library. The earliest pieces are a manuscript fragment, handwritten in Latin, and a leaf from a Bible, both believed to be from the 12th century. Other pages include a handwritten leaf from a 15th-century copy of Livy’s History of Rome; several pages with engravings from a 1740 volume titled Heads of Illustrious Persons of Great Britain; and an 1893 English version of a German story, "Sidonia the Sorceress," translated by Lady Wilde, Oscar Wilde’s mother.

The approximate age of the materials was gleaned from handwritten notes that were found tucked into the mats holding the documents, most likely composed by a bookseller or collector. “While some notes obviously describe accurately the fragments with which they are paired, the oldest manuscript items warrant careful study in order to ascertain the veracity of their dates and attributions,” Barbour says. The documents were also examined by Karen Overbey, assistant professor of art and art history, who is a specialist in the medieval period. She was able to verify that the oldest pieces were, in fact, genuine medieval manuscript fragments.

From the nature of the assembled material, Barbour says, one theory is that it was used for a course on the history of books. But there are no clues as to when that class might have been taught, or by whom. The only certainty, he says, is that these pages are not part of the best-known collection of rare books in Tisch Library, the W.F. Welch Collection, which centers on the history of the book, particularly early printed books of the 15th to 17th centuries.

The documents, even the oldest ones, were in good shape when they were found—“parchment is very durable,” Barbour says. “For documents as much as 800 years old, they were in pretty good condition.” Still, they underwent conservation work at the Northeast Document Conservation Center in Andover, Mass., where each leaf was cleaned and preserved. At the same time, they were also digitized.

Another advantage of putting the materials online is that, ultimately, it may help solve the mystery of their origins.

“There is a possibility that our fragments will be reunited one day with the parts of the text to which they belong,” says Barbour. “It’s entirely possible that there are other collections out there with leaves from these same books.”

The Greek Goddess and NASA’s New Mission to the Moon