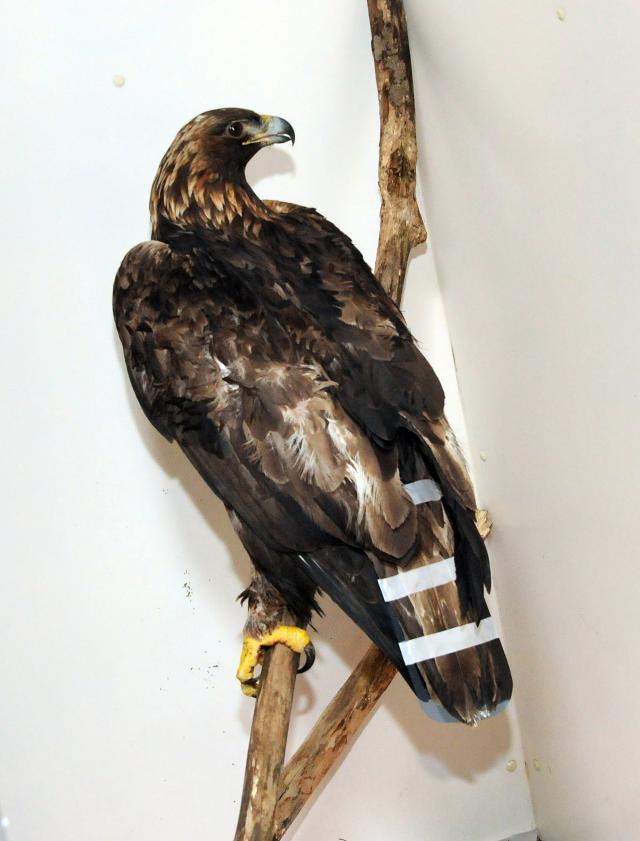 Although golden eagles are a protected species in the United States, they are commonly found only in the western states, Alaska, and Canada. Sightings in New York and New England are exceedingly rare, and occur only during migrations. They are often 50 percent larger than bald eagles, with wingspans that surpass seven feet.

The Golden Eagle was found in Amenia, New York, near the New York/Connecticut border, by snowmobilers in the woods in early February. The bird had sustained multiple puncture wounds on its left leg, which are believed to have been caused by an animal it was trying to capture. In addition, the eagle was knuckling on the left foot. The eagle was transported to the Sharon Audubon Center in Sharon, Connecticut.

The bird was then seen at a nearby animal hospital and by a local wildlife rehabilitator, and ultimately transferred to Tufts Wildlife Clinic in Grafton, Mass, where clinicians treated its wounds, splinted its injured foot, and prepared it for re-entry to the wild in the facility's 100-foot flight cage.

Prior to release, the golden eagle will be outfitted with a GPS-GSM telemetry unit and a tracking band by Todd Katzner, Ph.D., a research assistant professor at West Virginia University.

"To be able to treat such a rare bird to this area has been a wonderful learning experience for Tufts veterinary students and veterinarians here," said Dr. Florina Tseng, director of the Tufts Wildlife Clinic at the Cummings School of Veterinary Medicine. "Anytime we can see a bird take flight after successful rehabilitation, it's a great day to be in this field."

The Tufts Wildlife Clinic treats more than 1,000 wild birds each year, and is one of few stand-alone academic wildlife hospitals in the country. It serves as a regional resource for many veterinarians, health professionals, and wildlife biologists. Skills and knowledge are exchanged through programs of cooperative teaching and continuing education.

The clinic contains all the latest diagnostic, medical and surgical capabilities to house and treat a broad range of sick and injured native wildlife. All veterinary students at the Cummings School are required to do at least one rotation at the clinic, which is funded by the veterinary school and private donations.

Photos will be made available to the media and public following the release.