Sustainability is on the docket every day at Tufts, from building maintenance to teaching and research 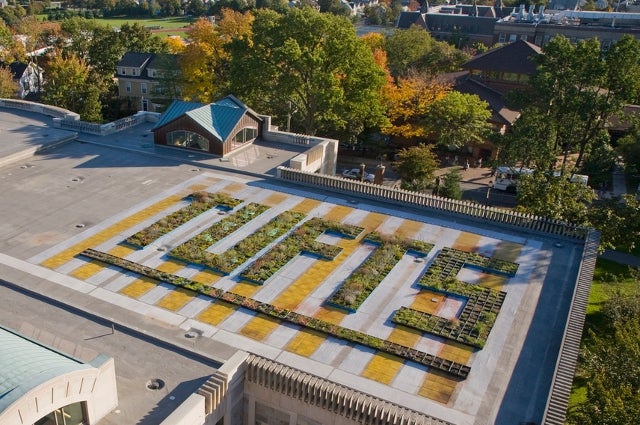 On April 22, Tufts celebrates the 41st annual Earth Day, but in this university community, it’s not a one-off event.

From the student-organized Tufts Energy Conference this past weekend to ongoing efforts to incorporate sustainability into everything from building maintenance to teaching and research, Tufts has made protecting the environment a priority. It’s a natural fit for one of the organizers and first signatories of the 1990 Talloires Declaration, an action plan for incorporating sustainability and environmental literacy at colleges and universities around the globe.

Campus sustainability efforts aren’t usually flashy. They often occur behind the scenes, but considered cumulatively, they add up to important change. They include things like the installation of LED lights in the Dowling Hall parking garage, which cut electric power usage in half, and the switch from oil to natural gas in one of the university’s large steam-heat-producing boiler plants this summer, a move that will reduce carbon emissions and lower costs, says Betsy Isenstein, energy manager in the Office of Facilities Services.

Sustainability is part and parcel of much new construction at Tufts. The expansion of the School of Dental Medicine, completed in 2009, received LEED silver certification from the U.S. Green Building Council. Leadership in Energy and Environmental Design (LEED) standards are the nationally recognized green building model. The five-story addition, for instance, has 1,700 new windows, which bring in more light and contribute to its energy-saving profile.

Similarly, the building project for new biology laboratory space at 200 Boston Avenue will be LEED gold certified. And the new Steve Tisch Sports and Fitness Center, which just broke ground last week, will incorporate the latest technology, with special attention to high-efficiency lighting and lighting controls.

“We have continued to take a leadership position on sustainability since 1990,” says President Lawrence S. Bacow. “We were a founding member, and the first university member, of the Chicago Climate Exchange. We have been recognized as an innovator in finding more efficient ways to utilize and conserve resources throughout the university, including energy and water, and to limit and recycle our waste products.”

In The Princeton Review’s Guide to 311 Green Colleges: 2011 Edition, for example, Tufts is among the schools chosen from Massachusetts. Published in partnership with the U.S. Green Building Council, the guide focuses solely on colleges that have demonstrated a notable commitment to sustainability. It notes that Tufts “has a smaller carbon footprint than many schools.”

It’s not just buildings and infrastructure that make campuses sustainable. Dining Services, for example, is doing its part by expanding its successful food-composting program that removes tons of waste food that might otherwise have gone into the trash. All dining halls on the Medford/Somerville and Boston campuses compost food waste—about 245 tons a year—which is processed at area farms. Other campus eateries are also in the the program, including Mugar Café and Hotung Café on the Medford/Somerville campus and the cafeteria at Agnes Varis Campus Center at the Cummings School in Grafton.

As much as possible, Dining Services buys local, organic and fair-trade products, including sustainable fish and cage-free eggs. And more than 140 different organic food items are sold at the Medford/Somerville campus convenience store.

Reducing trash is another focus. Facilities Services, for example, helps make annual events such as Community Day and the President’s Picnic what are called “zero-waste events.” That means what it says: nothing enters the trash stream because food is composted, and utensils and beverage containers are recycled, says Dawn Quirk, the university’s waste reduction manager.

Quirk also wants to improve recycling rates. She estimates that some 15 to 20 percent of Tufts’ trash is paper that can be recycled. One new approach to increase recycling rates is to potentially consolidate the university’s contracts for trash and recycling services to a single recycling company, which would have financial incentives to increase the amount of trash that’s recycled.

“I think that’s the key takeaway: we are mindful of sustainability issues and incorporate them where we can on a case-by-case basis,” says Robert Burns, director of Facilities Services.

The Office of Sustainability plays a role in bringing together constituencies interested in being green across the three campuses, and offers programs for students, faculty and staff.

Students are also drivers in the sustainability movement, from efforts that led dining halls to eliminate trays (to reduce food waste and energy consumption) to working with Dining Services on the installation of filtered water dispensers to promote drinking from reusable water bottles.

At a recent roundtable meeting of students and faculty on sustainability, several students voiced the hope that President-elect Anthony Monaco would make the issue a priority of his presidency.

During a visit to Tufts earlier this month, Monaco noted in an interview that he had a longstanding interest and involvement in sustainability issues, having tackled them directly in his current position at Oxford University.

The university “has a very strong obligation toward the environment,” says Monaco, who takes office on Aug. 1. “We’re going to hand this earth over to the next generation, and it is a definite priority to work together to improve its sustainability.”

As Oxford’s pro-vice-chancellor for planning and resources, Monaco was chosen to lead the university’s Sustainability Steering Group in 2008. It was charged with developing a strategic vision and plan for sustainability, and focused initially on reducing carbon emissions. To achieve that, Oxford needed to get an accurate baseline on what energy the institution was already using, building by building, Monaco says. It hired a consulting firm with expertise in the area, and devised ways to cost effectively reduce energy usage throughout the university.

As the next president of Tufts, Monaco says he will be dealing with similar issues—and he sees opportunities in those challenges. “Since we’re going to address certain infrastructure issues,” he says, “we should do it with sustainability as a priority.”

As noted in the Talloires Declaration, one of the commitments that many higher education institutions have made to sustainability is to incorporate those ideas in teaching and learning. It’s equally critical, Monaco says, to embrace climate change and environmental issues in institutions’ research enterprises.

For example, some scientists at the School of Engineering focus their research on alternative energy. Thomas Vandervelde is working to make solar panels more efficient, while Luisa Chiesa is part of a team looking to optimize components for large-scale fusion power plants.

The environment is also the focus of the vice provost’s Research Day on Sustainability, which will take place on May 3 at the Aidekman Arts Center on the Medford/Somerville campus. It will feature panel discussions on sustainable technology, sustainable development, sustainable cities and sustainable policy, as well as poster presentations.

“It’s important for higher education to be a leader in sustainability,” says Monaco. “Larry [Bacow] took a leadership role from the very beginning, which I hope to continue.”