In her new career, this retired judge advances animal and child welfare 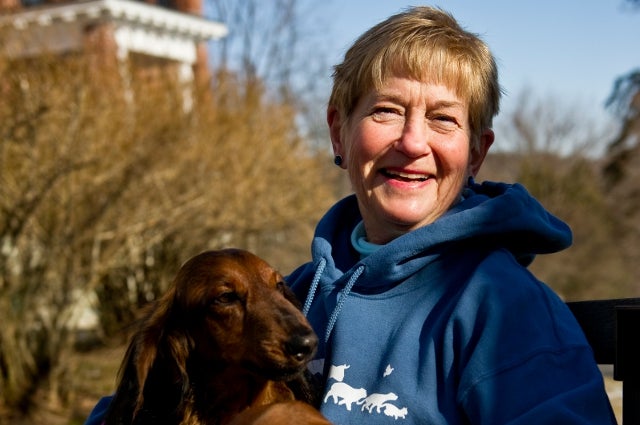 An animal lover since she was a young girl, Martha Grace always dreamed of becoming a veterinarian. Life had other plans.

“I got married after my junior year in college,” says Grace, who earned a B.A. in zoology at Smith College. “Back in those days, married women didn’t go to graduate school. There also wasn’t a veterinary school in New England.” So Grace took what she calls “the Betty Crocker route.” She had a son and a daughter four years apart and threw herself into running the household.

Still wanting to pursue graduate education, she went on to earn a master’s degree in history from Clark University and then applied to the New England School of Law’s part-time program for those with young children.

“I attended New England School of Law part-time for one semester and realized I would be there for the rest of my life. So I doubled up on classes,” she says.

“I loved being a judge,” says Grace. Although the cases were often heartbreaking, she says it was fulfilling to help parents turn their lives around so they could regain custody of their kids and to assist caring families in adopting abused and neglected children.

Still, she remained passionate about animal welfare. As a resident of Worcester, Mass., it was with great interest that she watched the Cummings School of Veterinary Medicine grow up in her backyard, particularly when a master’s degree in animals and public policy was added to the curriculum in 1995. She started thinking that program would build on the skills she had developed working on legislative efforts around children’s issues.

Grace retired as chief justice in February 2009. Finally, she had ample time to clean her attic, spoil her long-haired dachshunds, Maggy and Woody, and ride her nine-year-old thoroughbred horse, Microchip.

That free time soon vanished. She had an epiphany while watching The Bucket List, a film in which two dying men make a list of all the things they want to do before they “kick the bucket.”

“I turned to my husband and said, ‘I’m never going to be younger,’ ” recalls Grace of her decision to apply to the yearlong master’s program offered by the Center for Animals and Public Policy. She and 11 others were accepted into the Class of 2011.

Making the Connection to Animals

Grace never expected that her former career and her studies at Tufts would overlap. That changed when Lorna Grande, V90, the coordinator of the Human/Animal Violence Education Network (HAVEN), visited campus to talk about the links between human abuse and animal abuse. She talked about HAVEN’s work to bring together Berkshire County professionals working in education, animal protection, human services, law enforcement and veterinary medicine to address violence in all its forms.

“I would say about 90 percent of my court cases involved child abuse, and it is not pretty stuff,” says Grace. “If a veterinarian saw five cases of abuse a year, and those ended up being investigated, I bet three or four of them would show that there was also child abuse in the house,” she says.

The research bears this out. In a 1997 survey of the largest U.S. shelters for victims of domestic violence and child abuse, more than 85 percent of shelters said that women also reported incidents of animal abuse, and 63 percent of children reported it, too. And the Journal of Community Health in 2005 listed pet abuse as one of five factors that predisposed individuals to other abusive behaviors.

“But what was astonishing to me,” says Grace, “is that in my 20 years as a Massachusetts judge, I never heard the word ‘animals’ mentioned once.”

After this eureka moment, Grace sought out Grande as a mentor during the month-long externship required for the degree in animals and public policy.

HAVEN had supported the filing of legislation that would allow judges to add pets to restraining orders. Grace says that as a judge, she was unaware that pets could be included on orders of protection. She quickly realized that the obstacle to change was getting that information to participants in the state judicial training program. At a session on domestic violence training, Grace was given a few minutes to talk to judges about how to include pets on a restraining order.

But the former jurist realized that more education was needed and that she could assist the state in establishing an important early warning system for child abuse. Grace helped HAVEN reconnect with the Massachusetts Division of Children and Families to discuss adding a session on the relationship between human and animal violence to its statewide training program for case workers.

Grace has come full circle with her final class project: she will lead a training session on human/animal violence for the state’s juvenile court justices in May. Although she says she’s frustrated she wasn’t fully aware of these issues during her judicial career, she is grateful that she can help now.

“Martha has an almost unimaginable ability to effect profound change,” says Allen Rutberg, assistant director for education for the master’s program. “She has decades of experience addressing family problems and knows how the state’s systems work. She can take what she learns in this program and disseminate it to the proper authorities. And they’ll listen because she’s so well respected.

“We are very excited about that,” Rutberg continues. “The hope for all our students is that they’ll take the knowledge and resources that exist on campus and in the veterinary profession and share them with the outside world in ways that help both animals and people.”

Genevieve Rajewski can be reached at genevieve.rajewski@tufts.ed