Does tea lose its health benefits if it’s been stored a long time? And is it better to use loose tea or tea bags?

The amount of time tea is stored and the method by which it is brewed—steeping a tea bag versus using loose leaf—influence the phytochemical makeup of tea and how it tastes. That said, given the great variety of tea production and consumption practices, it is difficult to generalize about tea’s sensory properties and potential health benefits, such as its antioxidant and anti-inflammatory properties. A number of variables involved with growing, processing and preparing tea influence the final brew.

Some tea phytochemicals—the compounds that may have health-protective effects in humans—are more influenced by production, storage and preparation than others. The primary phytochemicals responsible for the health claims of green tea, called catechins, are found in the highest concentrations in fresh leaves. These compounds decrease over time from harvest. However, processing freshly harvested tea leaves into green tea through heating, rolling and drying helps stabilize and even increase the shelf life of catechins. 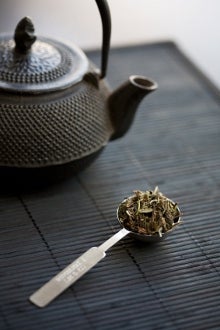 The primary phytochemicals responsible for the health claims of green tea, called catechins, are found in the highest concentrations in fresh leaves. Photo: iStock

Tea phytochemicals undergo various reactions during storage as the leaves interact with ambient oxygen and moisture and respond to fluctuations in light and temperature. Catechin levels are reduced significantly within six months of production.

For example, the most abundant green tea catechin, called epigallocatechin gallate, has been shown to decrease 28 percent during six months of storage in home-like conditions, while the second most abundant tea catechin decreased 51 percent. Thus, it’s best to drink green tea as fresh as possible to enjoy the sensory and potential health benefits of these phytochemicals. Storing tea in sealed packaging in cool, dark conditions helps increase shelf life.

While fresh may be best for enjoying many types of teas, that’s not always the case. Some pu’er teas from China are considered to improve in taste with storage, much like a fine wine. In fact, the degradation and oxidation of catechins during storage of pu’er teas result in the formation of new phytochemicals, which have come to be highly valued by tea drinkers for their rich, earthy taste and probiotic health properties.

Choosing to use loose leaf or tea bags also affects what you drink. Tea is commercially graded by the size of the leaf pieces. Whole buds and young leaves are superior to broken leaf pieces, called fannings and dust, which are found in many tea bags. Fannings and dust are more influenced by oxidation processes, which degrade the catechins during storage, than are whole tea leaves. This is because of the larger surface area of smaller pieces, compared to whole leaves, that are exposed to oxygen and light. Aromatic essential oils contributing to the olfactory experience of tea drinking are particularly vulnerable to evaporation in fannings and dust.

On the other hand, these smaller pieces of tea result in greater interactions with water during brewing and heighten extraction efficiency. The taste profile resulting from increased extraction may not be to everyone’s preference. While constituents such as theanine, which are related to the sweet and relaxing properties of tea, are extracted with greater efficiency, the same is true of the bitter and stimulating constituents such as caffeine.

Tea bags themselves may also interfere with extraction efficiency by constraining leaves from optimally interacting with water. The tea bag material can interfere with the extraction process, leach constituents and impart an unwanted taste to the tea. However, there is great variability in tea products, and some producers offer high-quality biodegradable teabags containing whole-leaf organic tea.

There is considerable ritual and ceremony involved in preparing a cup of tea using loose leaves. This is lost in the practice of dunking tea bags. For example, the Chinese gongfu cha dao (“way of tea” with “effort,” “work” or “skill”) method is based on multiple infusions of steeping leaves. Drinkers value this brewing method to optimally release the aroma, taste, color and physiological properties of tea, thus providing for a balanced composition that brings out nuanced essences.