Volunteers are improving cats’ lot, one animal at a time, with help from a Cummings School clinic 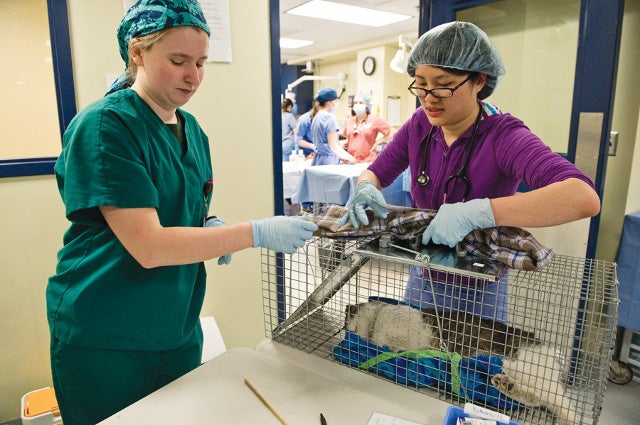 Karen Powers was once blissfully unaware of the staggering number of feral cats roaming the United States—up to 50 million, according to one estimate. Fifteen years ago she and her husband bought a Victorian home in Worcester, Mass., and cut down 13 dying trees in the backyard.

“I went to survey the hill and noticed a face peeking out from the branches that were stacked for pickup. I counted 25 cats,” says Powers. After they moved in, Powers says she would see “cats sitting on the grass, like they didn’t know what to do. I had the very painful realization that I had taken their home away.”

Up to 22 percent of U.S. households feed stray cats, and Powers became one of them. She put out food and water in her yard and called animal control. A sympathetic officer said the city did not have the resources to help, but put her in touch with the Second Chance Fund for Animal Welfare, a nonprofit in Bolton, Mass., that organizes low-cost feline spay/neuter clinics.

A Second Chance Fund volunteer told Powers that TNR—short for trap, neuter and return—would best help her yard cats because their skittishness around humans would make it impossible to place them in permanent homes. TNR involves humanely capturing feral cats, spaying or neutering them, vaccinating them and then returning them to their original location.

This feral cat management strategy has gained traction among animal advocates as a vital component in addressing the leading cause of feline deaths in the United States. Of the eight million stray or owner-relinquished animals that enter U.S. shelters every year, about half are euthanized for lack of a home, according to the Humane Society of the United States. The majority are healthy kittens and young cats.

Not Owned, But Clearly Cared For

The Second Chance Fund pointed Powers to the Cummings School of Veterinary Medicine’s Luke and Lily Lerner Spay/Neuter Clinic. The clinic dedicates one Sunday a month to managing the feral cats in Worcester County, a region of 1,579 square miles and 751,000 residents in central Massachusetts.

Because the nation’s 50 million unaltered, free-roaming cats can produce up to 147 million kittens each year, according to one study in the Journal of the American Veterinary Medical Association, the clinic’s goal is to reduce the number of cats that are homeless, says Emily McCobb, V00, MS02, director of the Shelter Medicine Program at Tufts. “We’d like to get all friendly, adoptable cats into shelters so that they can find forever homes,” she says. Then, over time, McCobb says, the goal is to eliminate the stray cat population through TNR.

The Tufts clinic uses the TNR technique on 60 to 80 feral cats each month from Worcester County, which has about 35,000 feral cats in its namesake city alone. More than 1,000 feral cats have been cared for in the clinic to date.

“It’s not just a high-volume clinic; it’s also extremely high quality,” says Elizabeth Evans, a student in the master’s program in animals and public policy who volunteers as the clinic coordinator. “Each cat gets the care that it needs.”

To staff the monthly clinics, Evans calls on a fluid cast of 35 to 45 people, assigning roles and a schedule to five veterinarians, 16 to 20 Cummings School students and five to 10 community volunteers. Vaccines and other medications are donated by Intervet/Schering-Plough, Merial, Putney Pharmaceuticals and Pfizer.

Volunteer cat trappers partner with residents to get the animals used to visiting feeding stations, which are placed permanently in areas where feral cats are known to roam. Food is withheld the day before trapping so the hungry cats will be more likely to enter a trap and eat, triggering the doors to close.

At the Tufts clinic, the cats are anesthetized for spaying or neutering while they’re still in the traps to lessen the stress that human contact would cause. After the animals are weighed and checked for microchips (to identify any lost pets), each receives a physical exam, pain medications and antibiotics to ensure a good recovery. Fourth-year students perform the spay or neuter and also what is known as “ear tipping”—snipping off the tip of each cat’s left ear and cauterizing the cut. It is the TNR community’s universal sign that a stray has been spayed or neutered.

After surgery, students administer fluids and rabies and distemper vaccinations and treat the cats for fleas and parasites. At the end of the eight-hour clinic day, the trappers fetch the cats and return them to their original colonies.

After four years of participating in Tufts’ TNR clinic, Powers says the cat colony in her yard is less than half its original size. She now feeds seven to 10 cats and makes sure any newcomers make a trip to the clinic. A self-described “foster failure,” Powers shares her home with four cats she removed from the colony when they were kittens.

Motivated by her success with her inherited feline colony, Powers joined McCobb and a coalition of other Worcester residents and animal welfare professionals in establishing Spay Worcester, a task force of the nonprofit Massachusetts Animal Coalition.

With the unanimous support of the mayor and city council, Spay Worcester is conducting a two-year feral cat-trapping and public education program focused on the city’s Main South neighborhood. Funded in part by a $49,000 grant from PetSmart Charities, Spay Worcester is aiming to increase the number of Worcester cats treated at the Tufts clinic to 100 cats a month over the next two years.

Spay Worcester’s efforts have garnered community support. Residents are acting as the TNR movement’s eyes and ears on the street, and they say they are more comfortable around the cats knowing that many of them have been inoculated against disease.

And, Powers reports, there’s been one unexpected outcome: “Neighbors are talking to each other now. Feeding cats has become this common bond.”