The Surf and Turf Connection

Small Farms, Big Issues: Why the farmers and the fishermen should be friends 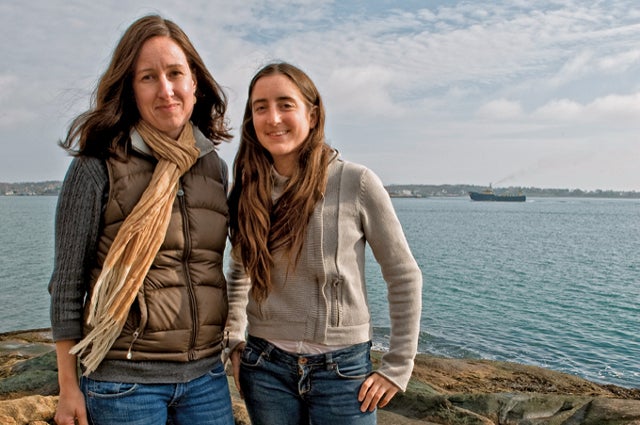 What do farmers and fishermen dream about? A bumper crop of zucchini and calm seas? Perhaps. But both lose sleep over some of the same things: finding markets for their products, transporting their goods cheaply, tapping into the local foods movement and protecting the natural resources on which they both depend.

Although the two groups face similar challenges in keeping their businesses afloat, they rarely compare notes. Two recent graduates in the Friedman School’s Agriculture, Food and Environment Program, Amanda Beal, N11, and Ellen Tyler, N11, are trying to change that. With a grant from the Eat Local Foods Coalition of Maine, they organized a series of forums around the state where farmers and fishermen could get together to talk and swap strategies.

“We’re looking for really creative solutions to help both groups,” Tyler says of the project, called By Land and By Sea. “So the more diverse perspectives we can pull in, the more innovative strategies will emerge.”

The two groups could also team up in educating their communities. Consumers are starting to cook more often with seasonably available produce, and teaching them about the seasonality of fish could be the next step. “There is a really dedicated core of people who want to buy locally and are willing to go out of their way to do it,” Beal says.

The students have already seen some surf-turf crossovers. A few fisheries have copied the Community Supported Agriculture model. Just as CSA members purchase shares of a harvest at a local farm, local fishery customers buy a share of the week’s catch. Some farmers’ markets have also started offering fresh fish from local fishermen, though not all allow it.

Although they may have a reputation for Yankee reticence, the farmers and fishermen had a lot to share at the forums. “There were definitely some community connections that we watched happen in those rooms,” Tyler says.

At one meeting, a farmer asked a fisherman whether lobster shells, which are a natural source of lime, could be composted locally for fertilizer. Many Maine lobsters get shipped to Canada for processing, taking their shells with them. Setting up more facilities for processing fish locally would keep those useful byproducts from needlessly traveling hundreds of miles.

In fact, the lack of processing facilities in Maine is a disadvantage to both fishermen and livestock farmers. “We’ve lost a lot of processing infrastructure from both industries, and we really need to look at how to rebuild that,” Beal says. “We have meat that goes to Maryland to be processed that comes back and is sold as locally raised meat. We have milk that goes to New York to be bottled. We’re seeing food travel a long way.”

Just as important as getting the farmers and fishermen together was connecting the various groups that support them. As veterans of food policy circles and natives of Maine, Tyler and Beal could see there were many organizations “that were working with farmers or fisheries but weren’t really working with each other,” says Beal. “We thought it could be beneficial to bring those entities together to think about how to best utilize their resources.”

The students have gotten some recognition for their efforts. They were named winners of the 2010 Dow Sustainability Innovation Student Challenge, which recognized the ultimate goal of the project: building a more resilient food system.

They were also delegates to Terra Madre, the annual international food conference in Italy, where Beal was asked to moderate a session and an online forum on the potential connection between farmers and fishermen worldwide.

Eventually, the two would like to see more farmer/fisherman discussions about natural resources, climate change and the ways what we do on land may affect fish stocks in the Gulf of Maine. “There is a link there that we probably don’t fully understand,” Beal says.

“If and when those issues come up,” Tyler adds, “we’ll have a community of food producers who are used to working together and who know each other”—and who can keep the conversation going.

This story first appeared in the Winter 2010 Tufts Nutrition magazine.