The Fruits of Civic Labor

In a marriage of public art and urban agriculture, Lisa Gross, G11, and her Boston Tree Party cultivate an orchard in the city 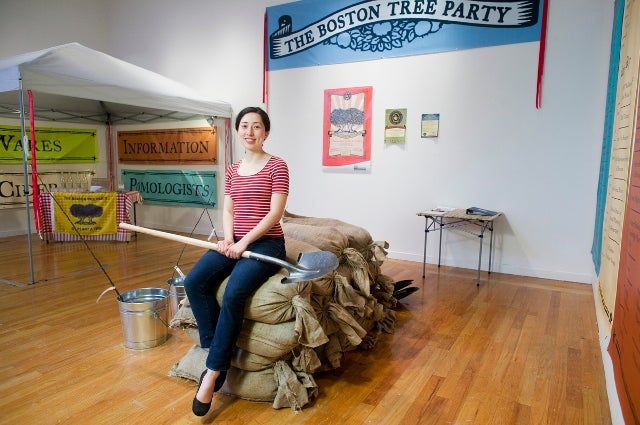 Lisa Gross stood along the Rose Kennedy Greenway in downtown Boston this spring and gave a speech to a gathered crowd, complete with musicians to add to the celebratory atmosphere. It was the inauguration of the Boston Tree Party—yes, you read that right. But this wasn’t politics as usual, despite the big banner, T-shirts and buttons: they were celebrating the planting of a pair of heirloom apple trees in the Greenway.

Gross, G11, isn’t a community organizer or an urban landscaper. She’s an artist, and the Boston Tree Party was her thesis project for the M.F.A. in studio art she received in May from Tufts and the School of the Museum of Fine Arts. Granted, the public art project was a pretty unconventional one: create a sprawling urban orchard in and around Boston by organizing community groups to plant heirloom apple trees, two at a time.

“The hope for this project is that it will be a catalyst for shifting the way people think, connect and engage,” she says. “The possibility for outcomes is open, which is really exciting.”

Gross’s project originally evolved from an interest in the contemporary Tea Party political movement and the attention it brought to its historical namesake. “In researching the original event, I started to discover that this very important moment in Boston and American history was really a performance,” she says. “It was a political and symbolic performance that helped start a movement.”

She researched the farming history of Boston and discovered that America’s first apple orchard was planted on Beacon Hill and that the oldest variety of apples in America was developed in Roxbury, Mass., in the 1630s.

Gross reached out to various communities, looking for partners. Now she has 55 groups involved, from elementary schools to assisted living facilities to local businesses in areas including Somerville, Roxbury, Mattapan and Dedham.

“We are not just planting trees anywhere there is space,” she says. “We are starting with the communities, and most are planting them on land they control. The idea is that there is a whole community committed to this project, promoting this ethos of stewardship.”

She found several receptive communities at Tufts. The Friedman School of Nutrition Science and Policy partnered with the Josiah Quincy Elementary School in Chinatown to help the project, planting one tree in the Boston campus’ student garden outside the Jaharis Building and another on the corner of Chinatown’s Oak and Washington streets in what was an empty tree well. The Medford/Somerville campus also participated in the campaign, with the student garden club, Tom Thumb’s Garden, planting a pair of trees on the Tisch Library patio.

“One of the beautiful things about this project is that these trees have to be planted within a quarter mile of each other,” Gross says. “So it becomes this physical embodiment of this social cross-pollination where each community has one tree that is dependent on the other. I think people were excited to get involved in something that felt big but at the same time manageable.”

While the Boston Tree Party is about public art, it is structured like a political campaign.

The project’s launch on the Rose Kennedy Greenway, for example, was very much modeled on political parties and rallies from the 19th century, with a marching band, speeches, flags, buttons and banners.

“Using the structures and trappings of a political campaign, we hoped to bring people together in an inspiring and festive way to engage in the ideas of food access and greening urban civic space,” Gross says.

After contributing $300 to cover the cost of materials, each community group “delegation” received a party planning kit, complete with all the trappings needed to throw their own mock political rally. That included, of course, a planting kit, consisting of the trees themselves and other gardening supplies, and a plaque letting any passersby know that the apples the trees produce will be free for the taking.

The community groups also will get guidance from a support network known as the Apple Alliance, which Gross created through partnerships with Groundwork Somerville, CitySprouts in Cambridge, the Northeast Organic Farming Association and the Boston Natural Areas Network.

The Apple Alliance and the Boston Tree Party will organize master classes on caring for the trees so they will thrive for the community participants and offered free and low-cost workshops and video tutorials. “We really want to support these delegations in growing their [gardening] skills, but at the end of the day, they are responsible for the well-being of these trees,” says Gross.

The tree project soon took on a life of its own, and led Gross to form the nonprofit Hybrid Vigor Projects, which she can use to independently produce public projects. “This is still very unusual for the visual art/public art world,” she says. “Currently, unless you are famous or well known enough to be commissioned by a museum, most artists don’t have the framework to do a large participatory public project.”

The groups finished planting 70 heirloom apple trees this spring. Gross hopes to reunite the urban farmers for an apple festival dubbed the “Boston Tree Party Convention” in the fall of 2015, when their trees will have matured enough to yield the first big harvest. The decentralized public urban orchard is expected to produce between 10,000 and 15,000 apples every year.

Lisa Gross will be among a list of local innovators to speak at the TEDxBoston event on June 28 at the Seaport World Trade Center. Visit http://tedxboston.org for information.

Kaitlin Provencher can be reached at kaitlin.provencher@tufts.edu. AAAA