Their CVs tell one story, but the things professors surround themselves with tell another 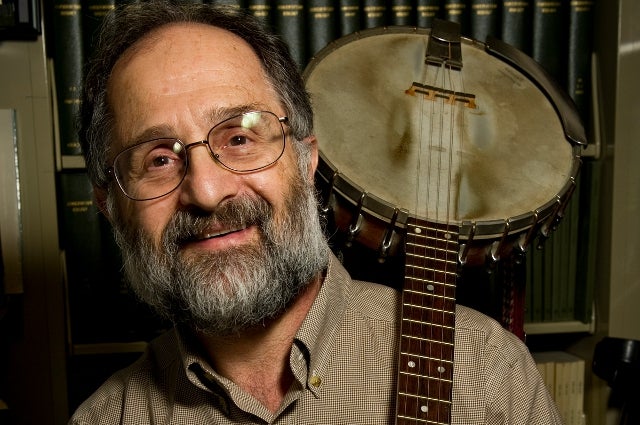 In the fourth of a series, we visit the office of Mark Pokras, associate professor in the Department of Environmental and Population Health at the Cummings School of Veterinary Medicine.

Ask Mark Pokras, V84, about Betsy, and he’ll tell you a story. Betsy isn’t his wife or daughter—she’s his banjo. Even though he went to high school in Venezuela—his father managed a chocolate factory there—growing up in the 1960s, he was a fan of the Kingston Trio and Pete Seeger. On a vacation back in the States during high school, he bought what turned out to be his favorite instrument—a banjo. He named it Betsy, after Davy Crockett’s rifle, because, he recalls, it invoked a spirit of independence and the frontier.

Betsy has been with him ever since, through a high school hitchhiking adventure around Latin America and later a trip around the United States, when he took time off from college at the height of the Vietnam War. “I had to take her,” he says. “It wasn’t a choice. I had to have something musical with me.”

In his trek across America—Pokras hitchhiked through 47 states in a little over three months—he’d earn money by washing dishes at diners and restaurants, and bed down on rainy nights in churches or even jails. At campgrounds, he discovered he could eat by playing the banjo, as other campers grilling their meals offered him hot dogs and hamburgers. “My banjo is absolutely a part of my life and has traveled everywhere with me,” he says.

Betsy now sits in Pokras’ office in the Barbour Wildlife Building on the Grafton campus, along with an array of other instruments he plays: guitar, mountain dulcimer, flugelhorn and bouzouki, a lute-like instrument used in contemporary Greek music. He’s got more instruments at home, too—quite a collection for someone who never studied music. His secret? Plenty of teach-yourself-to-play books.

One of his favorite activities is open mike night at the Cummings School, which he hosts every six to eight weeks with veterinary and community participants ranging from just a handful to close to 40. He’s pleased when students bring their instruments, and even when they just sit back and listen.

“We’re in medicine, and these students spend so much time every day focusing on the technical and quantitative stuff,” Pokras says. “The relatively rigid, relatively linear kind of thinking we do doesn’t necessarily make you a well-rounded human being,” and the music helps add another dimension, he says.

Pokras will pluck away at the banjo in his office early in the morning or when he’s on call at the Wildlife Clinic, and students don’t need him immediately. “I love being a veterinarian,” he says, “but there’s more to life.” Just ask Betsy.