Sea Mammals on a Mission

Deploying dolphins and seals for top-secret tours of duty

The SEALs may be the Navy’s signature special operations force, but America’s best defenders against underwater attack have flippers, not feet, and no need to don scuba gear.

Within 72 hours, the Navy’s bottlenose dolphins and California sea lions can be deployed anywhere in the world, via large vessels, planes or helicopters. Sea lions ride in specially designed enclosures and are kept cool, wet and comfortable.

Dolphins travel in fleece-lined stretchers suspended in fiberglass containers filled with enough water to support their weight. An attending veterinarian and a trainer oversee the comfort and care of all mammals during deployment. 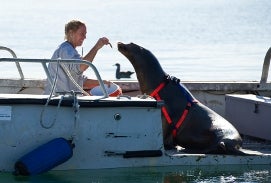 Trainer Caitlin Sanderson teaches Rambo how to tag a whale. Photo: Alonso Nichols
“The animals are so habituated to the process that they are the calmest ones in the bunch when we travel,” says Cynthia Smith, V99, the executive director and medical director of the National Marine Mammal Foundation, which cares for the Navy animals. She has accompanied the animals on missions to the Persian Gulf, the Red Sea and the north Pacific and north Atlantic oceans.

During deployment, the animals live in temporary tanks that resemble oversized inflatable pools and replicate their permanent home in San Diego Bay in terms of water quality, salinity and temperature. On duty, they are released untethered into the open ocean almost daily. (The sea lions do wear a harness with a Lojack-like tracking device so they can be found should they become separated from their human teammates.)

Perhaps these animals’ most impressive mission took place in 2003. Nine Navy dolphins worked with Navy SEALs, Marine Corps reconnaissance swimmers, explosive-ordnance-disposal divers and unmanned drones to ensure the port of Umm Qasr in southern Iraq was clear of enemy mines. The mission re-opened the harbor to ship traffic, including the Sir Galahad, a British supply vessel on a humanitarian mission to deliver food.

Dolphins and sea lions move with such speed and accuracy that they can “cuff” a suspicious swimmer or diver and zip away, leaving a “tagged” human attached to a strobe light or buoy and ready for security forces to apprehend.

Given the Hollywood-thriller nature of these marine mammals’ tours of duty, perhaps it’s not surprising that rumors about more devious doings have circulated over the years—including speculation that the Navy has used the animals as actual weapons. (The Day of the Dolphin, a 1973 film, featured the trailer, “Unwittingly he trained a dolphin to kill the president of the United States.”)

Until the early 1990s, the animals’ highly classified missions prevented the Navy from revealing that it does not now train, nor has it ever trained, marine mammals to harm humans or to transport weapons to destroy ships.

No animals have died or been seriously injured in the line of duty in the nearly 50-year history of the naval program.

However, as increasingly more sophisticated underwater robots are developed—borrowing from dolphins’ finely tuned sonar capabilities—the missions of the dolphins and sea lions may someday change. “Our organization is looking at what else these animals could be doing, whether it’s new national security missions, search and recovery or civilian work of national interest,” says Smith.

As if to punctuate her point, there’s a loud splash as the 28-year-old sea lion Rambo dives off a small motor boat and into San Diego Bay. He moves swiftly through the water, carrying a small device, which he pushes against a target. He’s learning to tag whales for population tracking and study—something that is impossible for humans to do without harming or stressing these animals, some of which are endangered.