Alpacas to the Rescue

New treatment for botulism holds promise for curbing other diseases, too 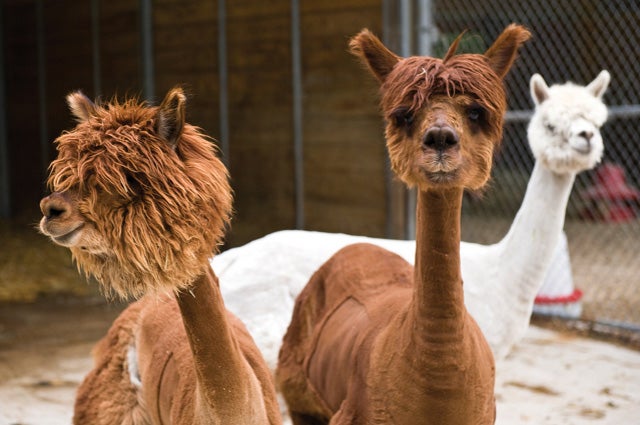 Using a protein derived from alpacas, a team of biomedical researchers at the Cummings School of Veterinary Medicine is developing a cheaper, more portable antitoxin to treat botulism, a paralytic illness that sometimes can be fatal. Eventually, the scientists say, this new way of producing antitoxins could combat a host of other serious diseases.

The toxin-producing botulism bacterium, called Clostridium botulinum, usually enters the body through an open wound or when someone eats improperly preserved or canned food. Symptoms of botulism poisoning typically develop within 12 to 36 hours, progressing from blurred vision and slurred speech to muscle weakness and full-body paralysis.

There is a vaccine for botulism. However, it would be impractical and expensive to inoculate everyone against something to which most of us will never be exposed. A widespread vaccination campaign would also eliminate the potential use of the C. botulinum toxin in Botox treatments for medical conditions such as muscle spasms or in cosmetic applications.

Instead, physicians treat botulism poisoning with antitoxins to prevent the progression of its potentially fatal symptoms. 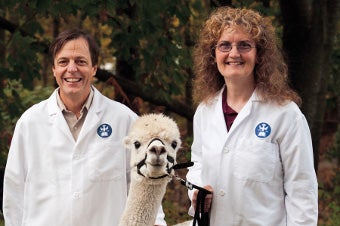 Daniela Bedenice, right, donated the use of her alpacas for Charles Shoemaker’s research on a new treatment for botulism. Photo: Alonso Nichols
The problem is that existing antitoxins are costly to develop, store and deliver—and have a short shelf life to boot. The current process for making antitoxins involves immunizing animals against botulism, which then generates antibodies in their blood. These are extracted and used to attack the toxin in the human body. The healing occurs when the antibodies bind to the botulism toxins, which then get flushed out through the liver.

“Attacking botulism is complicated because the bacterium produces seven known toxins,” says Charles Shoemaker, a biomedical researcher in the Division of Infectious Diseases at the Cummings School. “So you can’t just think about dealing with one toxin; you have to deal with all seven.”

Instead of having to use antiserum from animals immunized against each of the seven toxins, Shoemaker’s innovation uses small, easy-to-produce agents that recognize and bind to all the botulism toxins.

Alpacas are the gateway. Members of the camelid family, which also includes llamas and camels, alpacas produce an unusual type of antibody that offers enormous advantages for developing a practical treatment for botulism poisoning, Shoemaker says. The piece of the camelid antibody that binds to the toxin is called a VHH, which can be isolated and then produced as a single molecule in bacteria at very low cost. In fact, multiple different VHHs can be produced as a single protein chain, like beads on a string.

Because VHHs can be produced cheaply in commercial fermenters—and they have a longer shelf life than traditional antibodies—these inexpensive antitoxins could be stored and ready to go at hospitals across the country. Currently, the Centers for Disease Control stockpiles the traditional antitoxins in only a few locations.

Daniela Bedenice, the camelid specialist at the Cummings School, donated her own alpacas for the study. (She will adopt them back when their service is complete.) After the Tufts researchers immunized the alpacas against botulism, they drew a small blood sample to capture the genetic material that they used to identify the VHHs.

“All the alpacas have to do is graze on pasture and allow us to take a blood sample every couple of weeks,” says Bedenice of her animals’ role in scientific discovery.

Working with Cummings School biomedical scientists Saul Tzipori, Hanping Feng and Jean Mukherjee, Shoemaker is studying how the new antitoxin functions in mice. The research is being funded by the National Institutes of Allergy and Infectious Diseases and the New England Regional Center for Excellence for Biodefense and Emerging Infectious Diseases.

The research could lead to the rapid development and deployment of other new antitoxin therapies, Shoemaker says. Work is under way to develop VHH antitoxins for severe gastrointestinal diseases caused by the Shiga toxin, common in food poisoning, and Clostridium difficile, a new superbug.