Who Owns the Founding Fathers? 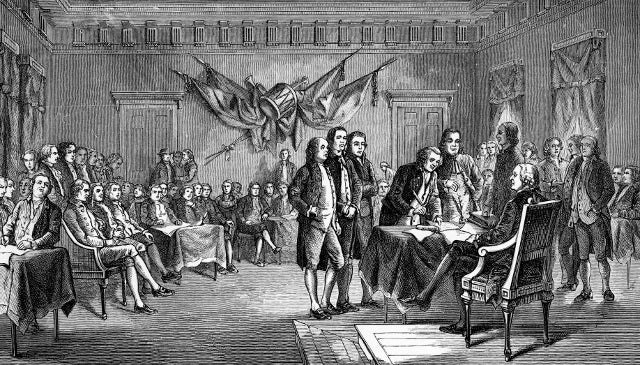 Warren Harding, generally numbered among our least memorable presidents, provided the words that have come to symbolize all that is hallowed, unique and exceptional in America’s view of itself: “the Founding Fathers.” The term has become a publicly owned industry, an essential part of political combat, school board disputes, congressional debate, Supreme Court decisions, church sermons and occasional acts of violence.

The names of the Founding Fathers ring out like the patriarchs in the Book of Genesis: Washington, Jefferson, John and Samuel Adams, Madison, Hamilton, Franklin and at least another half-dozen slightly lesser lights, all disciples of our civic religion.

They serve as guardians of the historical record from the Boston Massacre (1770) to the Constitutional Convention and Ratification (1787–88). They were present bodily or spiritually in Boston and Philadelphia, at Lexington, Concord, Valley Forge and Yorktown, to create and to defend liberty; and they have been asked to rise and report from their graves: “What would the Founding Fathers do today?”

Ownership of the symbols of the American Revolution and revolt against tyranny have passed most recently to the Minuteman Movement, the Tea Party Patriots and even to some who translate their patriotism into acts of murder and mayhem. Timothy McVeigh, the Oklahoma City bomber, was arrested wearing a Liberty Tree T-shirt with Jefferson’s words: “The Tree of Liberty must be refreshed from time to time with the blood of patriots and tyrants.”

The explosion that killed 168 people, including 19 children under the age of six, went off on April 19, 1995, the 220th anniversary of the battles of Lexington and Concord. An Arizona woman and member of the Minuteman Border Movement, Shawna Forde, was convicted in February of this year for the murder of a nine-year-old girl and her father after a robbery attempt intended to finance a paramilitary organization that would seal off the border to immigrants.

Both sides of the political spectrum want a piece of the action. Historian Jill Lepore, J87, describes in The Whites of Their Eyes how the anti–Vietnam War movement captured the Bicentennial spirit in the 1970s with signs that said “Dump Nixon, not Tea!” When these Americans speak or act, they do so with what they believe is the authority of . . . the Founding Fathers.

One of the great bounties of this passion has been a golden age of readable scholarly works that have educated a public lacking in American historical memory. American history is arguably the worst-taught subject in our secondary school curriculum.

The MIT historian Pauline Maier was puzzled growing up in Minnesota to discover so many high school American history teachers with the same first name: Coach. She soon realized that American history was the dumping ground for her school’s athletic staff, who had to be given some academic responsibility to justify a paycheck.

Today, Maier is one of the enlighteners helping the public understand what the Founding Fathers had in mind. She heads my reading list, with American Scripture: Making the Declaration of Independence and Ratification: The People Debate the Constitution, 1787–1788.

Another great historian, Gordon Wood, A55, H10, the dean of Founding Father scholars, wrote The Creation of the American Republic, 1776–1787, The Radicalism of the American Revolution (which won a Pulitzer in 1993), Empire of Liberty: A History of the Early Republic, 1789–1815, and, hot off the press, The Idea of America: Reflections on the Birth of the United States.

The current Tufts history professor Benjamin Carp’s Defiance of the Patriots: The Boston Tea Party and the Making of America provides additional Jumbo eminence. There are also biographers who could fill a long library shelf with readable and well-researched studies: Richard Brookhiser, Walter Isaacson, David McCullough, Joseph Ellis and numerous others.

The ideologues in printed T-shirts and three-cornered hats are not looking for disinterested scholarship. They prefer to pour the Founding Fathers into a preconceived mold, shaped to suit their purpose.

It is a mold those earlier Americans would not have felt comfortable in. Dead for 200 years after having lived their lives surrounded by slaves and women with hardly any legal status, they would have been shocked to see how this republic has evolved, with freedom and the vote for all Americans. What would the Founding Fathers say? Most likely, they would stand silent in disbelief.

This article first appeared in the Summer 2011 issue of Tufts Magazine.

Sol Gittleman is the Alice and Nathan Gantcher University Professor and professor of German, and was provost from 1981 to 2002.