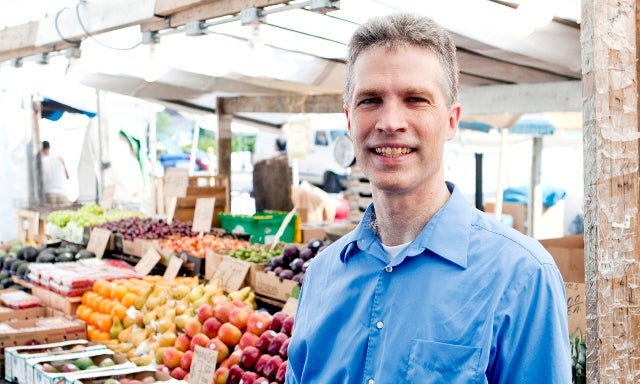 Does it seem like you need a second mortgage to fill your cart at the grocery store these days? Are these price spikes that hit us at the checkout line for real, or not as bad as they seem?

A lot depends on which prices you consider. Take the old standby of meat and potatoes. According to the federal Bureau of Labor Statistics (BLS), over the past two years a pound of ground beef went from an average of $2.23 per pound to $2.77, an increase of almost 25 percent. By contrast, potato prices rose over the past two years from $.63 to $.69 per pound, an increase of only 8 percent.

According to Parke Wilde, an associate professor and food economist at the Friedman School of Nutrition Science and Policy, U.S. food prices are more complicated than they appear at first glance.

Tufts Now: There is a perception among consumers that U.S. food prices have recently skyrocketed. Is this true?

Parke Wilde: Basically, I tend to think of it as not such a drastic change. U.S. food price inflation for many years was very low, in the neighborhood of 2 to 3 percent per year, and recently a high year’s food price inflation might be between 4 to 6 percent. Overall inflation is about 2 to 4 percent, so food is not that much higher. Last year, for example, the consumer price index recorded food increases at 3.6 percent.

There are agricultural shortages around the world—to the point that there were food riots in Africa and Asia just a few years ago. How is this global shortage affecting our prices?

The worst effects of food commodity price spikes are experienced by people in developing countries. The impact on U.S. food prices is not as much as people might think. In a poor country, a staple like rice will be a large portion of a family’s food budget and a large percentage of their entire income, as much as 70 percent. For Americans, food represents only about 10 percent of a family’s budget. Most of the costs we face in the grocery store are happening after the food leaves the farm: manufacturing, transportation, food retail and profit. So even if world commodity prices double, they have a much smaller effect on the U.S. consumer.

What about transportation, manufacturing and other costs that rise when energy and fuel prices go up?

Those are key drivers, more than the commodity price of food in the United States. The connection between fuel costs and food costs in the United States has gotten more interesting and complex. The traditional connection was that when fuel costs went up, agricultural production costs went up—in other words, when the cost of fertilizer, which is heavily fuel intensive, goes up and transportation costs go up, the grocery bill goes up. What has happened in recent years is that the food market has become connected to the fuel market in a second way, because of corn-based ethanol. As fuel prices rise, more farmers put their crop into ethanol production instead of food production to reap better profits. The result is that food prices go up as well.

Is there any one crop that most influences both commodity prices and food prices in general?

By far the one crop in the United States would be corn. It is in all manufactured food products in the form of fructose or other ingredients, and it is also the principal ingredient needed for animal food production as feed. And again there are the ethanol issues. This gives corn three reasons to be scarce and to increase in price. I do worry that we are allocating too many food resources to ethanol production.

Should we expect continued increases or might prices level out or even drop?

Currently and in recent decades, food prices have been low in the United States, relative both to our past history and to most other countries around the world. It goes with being a prosperous country that we spend less of our income on food than almost anybody else in the world. So I don’t think food prices will drop further in the United States. In fact, I am braced for moderate increases over the next few years.

Are those increases going to harm the economy?

This is the hardest thing for economists to express to people, because it sounds on the face of it totally loony: not all food price increases are bad. You have to ask yourself, is the food price increase a mistake or does it reflect a genuine scarcity? If things are really scarce, economists think prices ought to be high, because that sends the right message to everybody. It indicates to consumers that they should moderate their consumption, and it indicates to producers to innovate and produce more efficiently. These are all good things that can happen. Moderating consumption should not mean people going hungry, but perhaps going a little easier on the meat consumption, because that uses more resources than raising fruits and vegetables and grains.

How much of people’s reactions to increasing food prices has do to with the recession, when more people are out of work and depending on federal and state assistance, and those who are working may be earning lower wages?

When people are really frustrated by prices in the grocery store, it is partly because their incomes are not what they wish they were relative to their expenses. According to the national average wage index, wages and salaries have been increasing slowly in recent years, whereas they had previously been rising more quickly. So people are feeling the disparity between food cost increases and stagnant wages and salaries.

One good thing is that food stamps—from the Supplemental Nutrition Assistance Program, or SNAP—are indexed automatically for inflation, so when food prices go up, those budgets go up automatically. And as more people are unemployed, the federal government has made a commitment that the SNAP budget will serve all who are eligible.

What is the best way for us to use our food dollars?

Moving beyond our frustrations with food prices, we can listen to what prices are telling us. What we consume sends a message to food producers and manufacturers. If prices encourage us to use fewer resource-intensive foods like meat and buy food with no packaging, these changes will alert the food industry that they must become more efficient or risk losing profits.