The Really Little Engine that Could 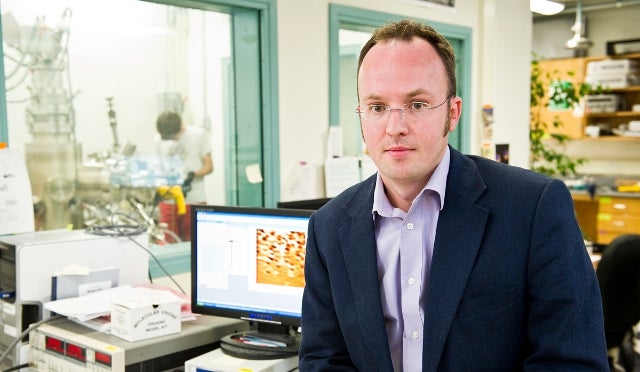 The smallest electrical motor on the planet, at least according to Guinness World Records, is 200 nanometers. Granted, that’s a pretty small motor—after all, a single strand of human hair is 60,000 nanometers wide—but that tiny mark is about to be shattered in a big way.

A Tufts research team has developed the world’s first single-molecule electric motor—which is a mere 1 nanometer across. They reported the results in a paper published in Nature Nanotechnology on Sept. 4. This development—made possible with a low-temperature scanning tunneling microscope at Tufts, one of only about 100 in the United States—may be the first step toward a new class of devices that could be used in applications ranging from medicine to engineering.

“The excitement is in the demonstration that you can provide electricity to a single molecule and get it to do something that’s not just random,” says team leader Charles Sykes, an associate professor of chemistry in the School of Arts and Sciences.

Single-molecule motors are not new, but until now they’ve been driven by either chemicals or light. A molecular motor powered by electricity has significant advantages over those other technologies, says Sykes. He explains that to power molecular motors with chemicals, scientists must add chemicals to a beaker filled with trillions of molecules. “So there are limited things you can do to that,” he points out. Likewise, using light to power molecular motors creates difficulties, because even very tightly focused light will hit many molecules at once.

With the scanning tunneling microscope, “we can land just on top of one molecule, measure it and spin it,” Sykes says. “It’s the ultimate way to do it.” 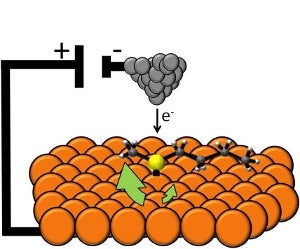 In this illustration, the orange represents the copper surface on which the molecular motor is resting. The yellow ball is the molecule’s sulfur base, and the two arms are composed of carbon and hydrogen atoms. The power source above the device is the tip of a scanning tunneling microscope, which uses electricity to direct the molecule to rotate in one direction or another. Illustration: Sykes Laboratory
Sykes and his colleagues used the metal tip of the microscope to provide an electrical charge to a butyl methyl sulfide molecule that had been placed on a copper surface. The molecule had a sulfur atom at the center and carbon atoms radiating off to form two arms, so to speak: four carbons on one side, one on the other. In subsequent experiments, such arms could potentially act as interlocking cogs or gears, and as one molecule is powered, it could turn or rotate others in sequence.

Sykes cautions that practical applications of the single-molecule electric motor are distant. But he imagines it could be used, for example, in sensing and medical test devices that involve tiny pipes. “At these small scales, friction of the fluid against the pipe walls increases, and covering the walls with motors may help drive the fluids along,” he says. Molecular electric motors may also be of use in nanoelectromechanical systems (NEMS). For instance, coupling molecular motion with electrical signals may allow scientists to build signal delay lines and nanoscale sensors.

Before realizing these potential applications, breakthroughs would have to be made in the temperatures at which electrically driven molecular motors operate. For the experiment that Sykes did at Tufts, the temperature surrounding the molecular motor had to be reduced to 5 Kelvin—a chilly minus 450 degrees F.

That’s because as temperatures rise, the motor spins much faster, far beyond the ability of the scientists to measure the rotations. At 100 Kelvin—or minus 279 degrees F—a molecular motor spins more than a million times per second. “It’s not that we couldn’t work at a higher temperature—it’s just that too much is happening,” says Sykes. “At that speed, it’s just a blur.”

At the colder temperature that the Sykes group used, the motor went through about 50 rotations per second, which were easily measured. But to prove that the motor was being driven by the electricity provided and that the movements were not just random, Sykes’ group had to track all those rotations. “For every single data point in the paper, about 5,000 of these [rotations] were counted,” Sykes says. “You collect data for five minutes, but it takes a week to analyze the data.”

The size of the task explains the very unusual situation in which two contributors to the paper in Nature Nanotechnology were high school students from Newton interning on the project. Sykes trained them, along with graduate and undergraduate students, to track the movements of the tiny molecular motors. 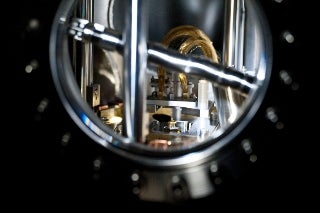 Inside the scanning tunneling microscope in the Sykes Laboratory. Photo: Alonso Nichols
Each set of rotations was counted by two different testers. This created a double-blind process, ensuring that the rotations were accurately counted.

It was tedious work, but the young students excelled at it, Sykes says. In fact, one of the high school students, Nikolai Klebanov, eventually enrolled at Tufts—he’s now a sophomore in chemical engineering.

Sykes’ research, which was funded by the National Science Foundation, the Beckman Foundation and the Research Corporation for Scientific Advancement, will continue. “We will try and learn all we can about how these molecular motors work,” Sykes says. That includes using different molecules, power sources and ways of attaching the molecules to surfaces. The goal of those efforts will be “to understand the interactions and improve the motion,” he notes. He adds that he and his colleagues “will also study how the energy can be transferred to other molecules and make arrays of tiny cogs or gears on surfaces.”

And that world record? Sykes says he will soon submit the Tufts-built single molecule electric motor to Guinness World Records. If accepted, it will set a new record that probably won’t be broken any time soon.