A Clinic of One's Own 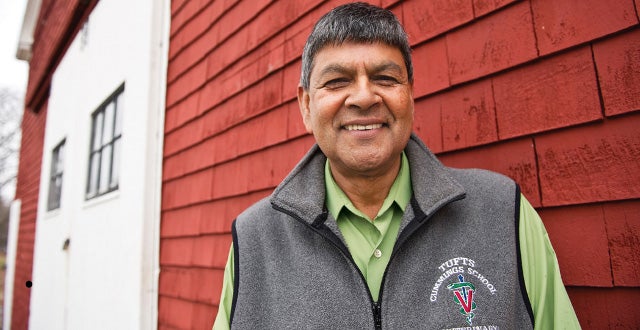 Roughly half the residents of Ishurdi, Bangladesh, once lived on the wrong side of the tracks. Literally.

Located 135 miles northwest of the Bangladeshi capital of Dhaka, Ishurdi is home to 81,000 people, primarily middle-class families who own homes and send their kids to college. The town grew up around a railway line nearly a century ago, and today the tracks that bisect Ishurdi remain as busy as ever, ferrying freight and people. It used to be that when the train came through every 40 minutes or so, residents on the west side of town were in danger of having their access to medical care—then only available on the east side—blocked.

“If there was an emergency, you never knew if a person would be able to get to a doctor,” says Sawkat Anwer, who grew up on the west side of Ishurdi and is the associate dean for research at the Cummings School of Veterinary Medicine.

In 2010, Anwer bridged the divide: his family funded the construction of a nonprofit health-care clinic on the west side. He and his five siblings donated two acres of land that is just a few yards from where their childhood home still sits, and Anwer established the Kamini Health Care Foundation to subsidize clinic operations. 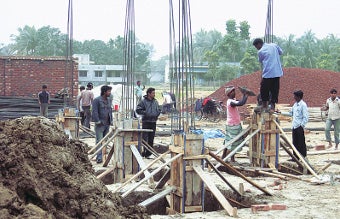 The Kamini Clinic under construction in Ishurdi, Bangladesh. Photo: Courtesy of Sawkat Anwer
The clinic is called “Kamini,” after the native star-shaped white flower that gave Anwer’s late mother, Jahanara Hossain, her nickname.

His younger sister, Shreen Akhter Rumee, was the inspiration for the clinic. “One day we were talking, and she said, ‘You’re outside [Bangladesh] and doing well. You’ve got to do something for your land, for your home,’ ” Anwer says.

Kamini Clinic was a family affair from the start. Anwer’s nephew, Wahid Asif, an award-winning architect in Bangladesh, designed the 8,000-square-foot brick building pro bono. Anwer’s brother-in-law, Saidul Hasan, a physician with a public health degree, heads the clinic, which opened in December with a staff of nine providing emergency and routine outpatient care. The clinic also has a pharmacy and offers diagnostic services, including lab work, X-rays and ultrasonography.

Patients pay $1.50 for a routine visit, which is roughly 25 percent less than the market rate in Bangladesh. But the demand for health-care services has been so great that the clinic is meeting half its expenses through that income. Anwer since has recruited three more physicians, including the first female obstetrician/gynecologist.

“A doctor’s visit usually costs $2 in Bangladesh,” says Anwer. “That’s a lot of money when you consider that a person’s monthly income is around $100.”

There is a need for even more medical services. Currently, Ishurdi residents with kidney disease have to travel more than 270 miles roundtrip to Dhaka, three times a week, for dialysis. On a good day the trip takes five hours—one way.

The roads of Bangladesh present a particular obstacle to the cars, rickshaws and cattle-drawn carts headed for the capital: people use the blacktop to dry their laundry, spreading their garments across the road. Culture dictates that no one can drive over the clothing.

“When that happens, everything slows down until you can’t drive faster than 25 miles an hour,” says Anwer. “It can take six hours each way to get to the capital.”

And so hiring a nephrologist is Anwer’s next priority. It won’t be easy. Physicians have to leave Bangladesh for such specialized training, and they can make a better living by remaining abroad.

Anwer left Bangladesh for doctoral study in the U.S. He received a Ph.D. in physiology from Kansas State University in 1973 and later a DVHM in pharmacology and toxicology from the University of Munich. It was at Kansas that he began researching liver diseases, work that continues to define his academic life as a Distinguished Professor in the Department of Biomedical Sciences at the Cummings School.

He has been a faculty member at Tufts since 1983, and twice has served as interim dean of the veterinary school. He teaches pharmacology and leads a research group that is investigating ways to reverse the damage done by liver diseases such as cholestasis, in which the flow of bile from the liver is blocked.

And Anwer says he needs to go back to Bangladesh, probably later this year, to see in person the clinic that has transformed Ishurdi. For now, the hundreds of digital photographs emailed across the miles will have to do.

“Seeing it in person for the first time will make me feel good, especially to see people getting help,” he says with characteristic modesty. “That’s all I wanted.”

This article first appeared in the Spring 2011 issue of Tufts Veterinary Medicine magazine.