Where the Wild Things Survive

Veterinary students work on the frontlines of species preservation 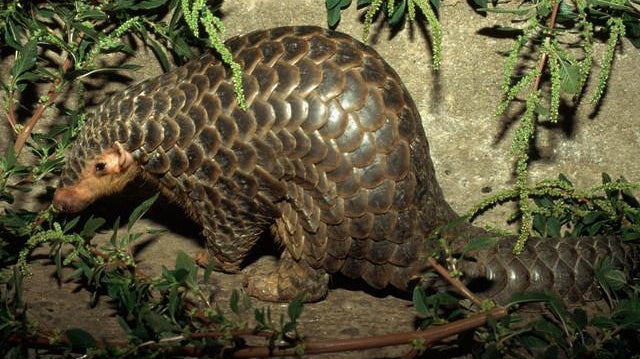 There aren’t many kids who can claim a fascination with the pangolin, a decidedly odd-looking creature that lives in the tropics of Asia and Africa and prefers the night life. Then there’s Laura Harvey, V12, who worked at a wild animal rescue center in Taiwan last year to help save the exotic pangolin from extinction.

The only mammal covered with plate-like keratin scales—the same protein in your fingernails—pangolins feast on insects at night and spend their days sleeping. But poachers are threatening their survival. Pangolin meat is considered a delicacy in some countries, and some cultures prize the supposed medicinal properties of the keratin scales for things such as reducing swelling and improving blood circulation.

Harvey says she was “ecstatic” to finally get up close and personal with the animal she discovered as a child. “I don’t remember the first time I learned about pangolins,” she says, “but I had them in the back of my mind as ‘favorite animals,’ along with wombats, capybaras and the platypus. I liked the unique animals that most children didn’t know about.”

In recent years, customs and wildlife officials in Southeast Asia have seized hundreds of pangolins from illegal traffickers, and many of the seriously injured or ill animals end up at the Pingtung Rescue Center for Endangered Wild Animals in Taiwan. 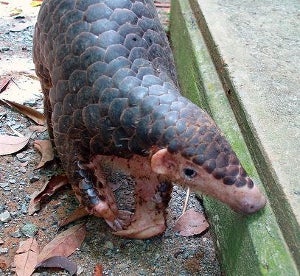 A pangolin in captivity. Photo: Leanne Clark/Carnivore and Pangolin Conservation Program
For her part, Harvey conducted research to determine baseline hematology data for the pangolin—reference values that will be useful in conservation efforts. “Blood work is a common tool to diagnose and track the progression of disease,” says Harvey. “My research will be useful in rehabilitating and treating injured and sick animals that are confiscated from the black market.”

Now back at Tufts, Harvey is the lead author on a paper that details her findings, “Clinical Pathology of the Chinese Pangolin: A Conservation Approach,” written with co-author Mark Pokras, V84, associate professor of environmental and population health.

Harvey was one of two Cummings School students to gain field experience in conservation medicine in Taiwan in the summer of 2010. Jonathan Kuo, V13, studied malaria in wild birds. “About 50 bird species on Taiwan are endangered or at risk,” he says. “All it would take is one mosquito to trigger a devastating outbreak. Our work gives us baseline data on what birds might be able to handle—or not.”

A special benefactor enabled Harvey and Kuo to pursue their research. Shalin Liu, founder of the Summer Star Foundation for Nature, Art and Humanity, underwrote their travel expenses and research. She continued funding student field experiences this year.

“I am happy to start what I hope will be a tradition,” says Liu. “The number of animals we need to save is far beyond what we can handle, but education is the place to start. To be able to say ‘Come and see what we’ve got, and learn’—that’s the most precious gift you can give a young person.”

She has been supporting student activities at the Cummings School for a number of years. When she found a kindred spirit in Mark Pokras, she invited him to lecture at Taiwan’s Institute of Wildlife Conservation, of which she is a benefactor.

“I always feel very close to people who put animal welfare at the top of the list,” she says. “It’s like we’re family.”

In Taiwan, Pokras found a country committed to conservation. Last year, he delivered the keynote address at the International Conference on Wildlife and Conservation Medicine in Taiwan. “There is incredible diversity on an island that’s only slightly bigger than Massachusetts,” he says. “As they define the concept of conservation medicine and build a curriculum, people like myself can share what we’ve learned.”

Pokras says the new Tufts-Taiwan partnership has multiple benefits for students. Islands are microcosms of larger environmental and ecological issues, and on Taiwan, students “can see how the pieces fit together,” he says. “You can actually hope to know what all the variables are and wrap your hands around them.”

He predicts these kinds of opportunities will appeal to more and more Cummings School students. “Every fall these incredibly motivated students come in and are excited about what we offer—they want to learn it all,” Pokras says. “They’re like a mix of Jane Goodall and James Herriot and Albert Schweitzer.”