The Healer in the Lab

For almost five decades, Sherwood Gorbach has taken on some of the most difficult bacteria and viruses, and eased the suffering of patients

“I’m a physician first. Start with that,” says Sherwood Gorbach, M62. A faculty member at the School of Medicine for 35 years, Gorbach is much more than that: he’s been a pioneering force in the field of infectious diseases for nearly a half-century.

The author of 15 books and more than 500 papers, he has worked to prevent and cure familiar diseases like diarrhea, and he has helped develop innovative ways to manage new ones like HIV/AIDS. Whether studying parasites in rural tropical villages or managing hard-to-treat bacteria in urban hospitals, his motivation has been a singular one: “I went into this field because I wanted to take care of people. That has been the central theme of my life’s work.” 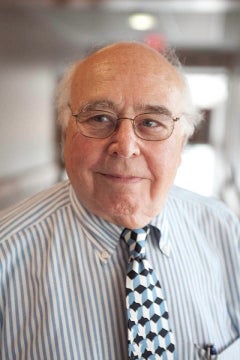 “My research involved animals, labs and microscopes, but the focus was inherently human,” says Sherwood Gorbach. Photo: Mark Ostow
Gorbach once again made headlines this spring, when an antibiotic he helped develop to treat the diarrhea caused by an emerging superbug received FDA approval. The drug, which hit the market in July under the brand name Dificid, targets Clostridium difficile, a notoriously hard-to-treat bacterium that infects some 700,000 people—and climbing—each year in the United States. The Centers for Disease Control estimates that C. diff, as it is commonly known, kills 30,000 Americans every year.

For a long time, physicians thought C. diff was harmless—its name refers to the difficulty scientists had growing the microorganism in the lab. But in 1978, in what Gorbach considers one of the most important findings of his career, he and his Tufts colleagues unmasked C. difficile as the agent responsible for the severe diarrhea called Clindamycin or antibiotic-associated colitis, a secondary infection that would strike patients after an initial course of antibiotic treatment.

That is an unfortunate side effect of the powerful antibiotics used to treat many disease-causing bacteria today. As they kill off the bad organisms, they also wipe out the beneficial bacteria that live in the human gut. That creates an environment in which organisms like C. difficile go into overdrive and unleash toxins that attack the colon and can lead to life-threatening consequences. Another course of antibiotics may clear the C. diff., but 25 to 30 percent of patients experience a recurrence of the infection, Gorbach says.

When a small biopharmaceutical firm asked Gorbach in 2003 to consult on a drug it had in development to treat C. difficile, one thing caught his attention: the antibiotic was the only one he’d seen that allowed lab animals to survive a recurrence of C. diff. “It was remarkable,” he says. “I realized this was a unique antimicrobial agent. Nothing like it had been seen before.”

Gorbach was so impressed with the data that he recommended the San Diego-based company, Optimer Pharmaceuticals, of which he is now chief scientific officer, petition the FDA to fast track the drug’s approval, which means using an accelerated process that gets new drugs to the marketplace in about half the time it normally takes. To get fast tracked, a drug must target ailments with no existing treatments, or it must vastly outperform current ones. Gorbach thought this drug had that kind of potential. The FDA agreed.

“We hope people will benefit from it,” says Gorbach, who continues to investigate new approaches to combating C. difficile. “It’s been a long arc, but I always come back to C. diff. I haven’t given up yet.”

A lover of classical music, Gorbach attended Brandeis University as an undergraduate and received a voice scholarship. After college, he sold insurance, a job that would provide for his family “but would not have satisfied me or my deep need to help people.”

Being drafted into the Navy gave him two years to rethink his career path. Inspired by his wife’s father, who was a physician, Gorbach entered Tufts School of Medicine in 1958. (He eventually spent a year training at the New England Conservatory while a first-year medical student at Tufts. “But it didn’t take me long to realize I was never going to be a great singer,” he says.)

After additional training in gastroenterology, parasitology and entomology, he landed in Calcutta, India, where, in the 1960s, he conducted a series of studies that led to the seminal discovery that entertoxigenic E. coli was a major cause of life-threatening diarrheal disease in adults and children, especially in the developing world.

He also discovered that entertoxigenic E. coli was the cause of an outbreak of infantile diarrhea in Chicago in the early 1970s—the first time the organism was linked to severe pediatric diarrheal disease in the industrialized world. He subsequently identified enterotoxigenic E. coli as the primary cause of travelers’ diarrhea in Mexico.

“I saw a lot of people dying of diseases that were treatable or easily prevented,” Gorbach says. “It reinforced my sense that infectious disease was the great killer.” In 1975, he returned to Tufts School of Medicine and what was then known as Tufts-New England Medical Center, where he was chief of infectious diseases until 1987.

Weight in the Fight Against HIV/AIDS

Even as medical science finds ways to combat familiar enemies, new diseases emerge. By 1993, the HIV/AIDS pandemic was on a global rampage, with some 17 million people infected. As researchers raced for a cure—or at least a way to manage the deadly disease—the nightly news was rife with images of skeletal AIDS patients wasting away.

“We realized there was a gap in our knowledge,” says Gorbach, who was then director of the Nutrition/Infection Unit in the School of Medicine’s public health and community medicine department. “We knew HIV patients experienced profound weight loss, but we didn’t understand why. If we knew the mechanism, we hoped we could prevent weight loss and even put pounds back on.”

The team studied the myriad reasons HIV/AIDS patients lose weight, from nausea and diarrhea to an increased need for calories as the body’s immune system attempts to fight off the virus and the secondary infections that accompany it. Though the exact mechanism remains unclear, Gorbach says it’s the virus itself, more than any other factor, that throws the metabolism into overdrive, like an engine with its throttle wide open.

“Ours was probably the first nutritional HIV unit, probably the largest,” says Gorbach, now the unit’s director emeritus. “We published literally hundreds of papers. This unit has been very productive.”

Among their many findings, Gorbach’s team learned that it was the wasting itself that is the major cause of death of HIV/AIDS patients. The risk of mortality sharply increases after losing five percent of body mass. After losing 10 percent, says Gorbach, the death rate accelerates even more dramatically.

Some of the team’s discoveries threw the socio-economic realities of the epidemic into sharp relief. Gorbach and his colleagues demonstrated an association between poor patients and wasting. But the researchers also found that HIV/AIDS patients could maintain and even gain weight with proper nutrition and strength training. “We did find a better diet will cause weight gain. If we could supply the food, they would gain weight,” he said.

Thanks in part to work by Gorbach and his colleagues, preventing weight loss is recognized as an important element of current strategies to manage HIV/AIDS. While some of the older drugs used to treat people living with the disease actually exacerbated wasting, says Gorbach, new anti-retrovirals in development are routinely tested for their impact on weight loss and metabolism.

That his research has had these kinds of profound outcomes for patients should come as no surprise. “My research involved animals, labs and microscopes, but the focus was inherently human,” says Gorbach, who continues to see patients and attend rounds at Tufts Medical Center. “That’s when I’m in my element. Infections have changed, new antibiotics come along, old ones are eclipsed,” he says. “The players have changed, but the scene remains the same. Curing infections is the essence of my profession.”