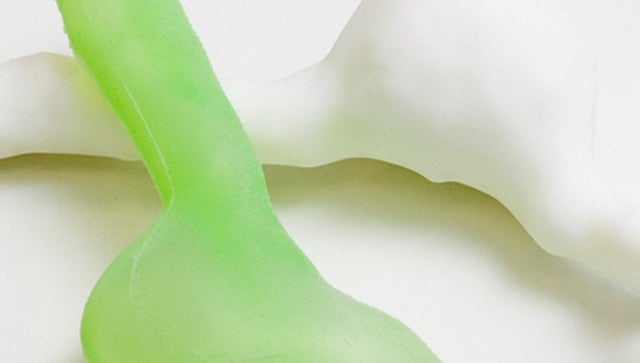 An aneurysm can be dangerous at any age, but older people are especially susceptible to abdominal aortic aneurysms, when the large blood vessel that feeds the abdomen, pelvis and legs balloons.

This type of aneurysm occurs in 12 percent of men and 5 percent of women between the ages of 75 and 84, according to the Centers for Disease Control’s Division for Heart Disease and Stroke Prevention. They can sometimes go unnoticed for years without symptoms. But when an abdominal aneurysm bursts, up to 90 percent of patients die, as many as 14,000 annually in the United States alone, according to the National Institutes of Health.

Now an interdisciplinary team of Tufts researchers is working on ways to predict whether this type of aneurysm will be likely to rupture. Currently, there is no accurate method for determining which aneurysm patients are at high risk of experiencing a rupture and therefore need surgery and which can simply be monitored. The project is funded with a three-year, $600,000 grant from the National Science Foundation.

The research team has expertise in biomaterials science and biomechanics, a combination of strengths that is ideal for finding a solution to this “major clinical need,” says Luis Dorfmann, an associate professor of civil and environmental engineering and director of the Mechanics of Soft Materials Laboratory.

The aorta is the main blood vessel that supplies oxygenated blood to the abdomen, pelvis and legs. When the section that runs through the body’s trunk, the abdominal aortic artery, weakens and balloons under the pressure of blood coursing through the body, the result is an aneurysm.

Currently, decisions about surgical intervention are made based on the size of an aneurysm: generally, if a CT scan reveals a bulge that is five centimeters or more, surgery is recommended as a matter of routine vascular surgical practice. 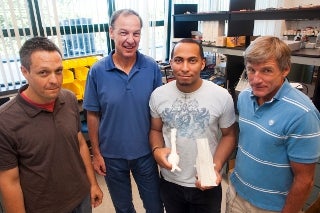 The aneurysm research team in their lab, from left, Ethan Golden, Luis Dorfmann, Kelvin Perez, E12, and Robert Peattie. Photo: Kelvin Ma
The Tufts engineers are working with Mark Iafrati, an assistant professor of surgery at Tufts School of Medicine and chief of vascular surgery at Tufts Medical Center. He is providing the researchers with excised aneurysm tissues and CT scans from patients with abdominal aortic aneurysms.

Back in the lab, Dorfmann uses a machine designed to measure the elasticity of the donated tissues to better understand how much stress they can bear before they tear. “We are just now starting to characterize aneurysm tissue,” he says. “We can learn how elastic or stiff they are, and what properties they have when they rupture.”

With CT scans from Iafrati’s patients, the team can also create detailed models of how aneurysms form and burst. Ethan Golden, V07, a postdoctoral associate based in the biology department in the School of Arts and Sciences, along with Kelvin Perez, E12, have created the flexible models using a synthetic silicone rubber.

“The goal is to modify the properties of the material to create an accurate model of a particular patient’s abdominal aortic aneurysm,” says Golden, who learned to create similar models while working on Tufts’ collaborative soft-body robot project.

The silicone model looks like a pink sock, with the heel representing the potentially fatal bulge of the aneurysm. A series of holes, which run along the length of the sock, are used to test how the pressure of blood flowing is distributed though the simulated aneurysm, says Perez.

“With this experimental data, we could change the way these aneurysms are diagnosed and management decisions are made,” Peattie says, saving patients from unnecessary surgery and identifying aneurysms that are more dangerous than they appear.

Julia C. Keller, communications manager at Tufts School of Engineering, can be reached at j.keller@tufts.edu.