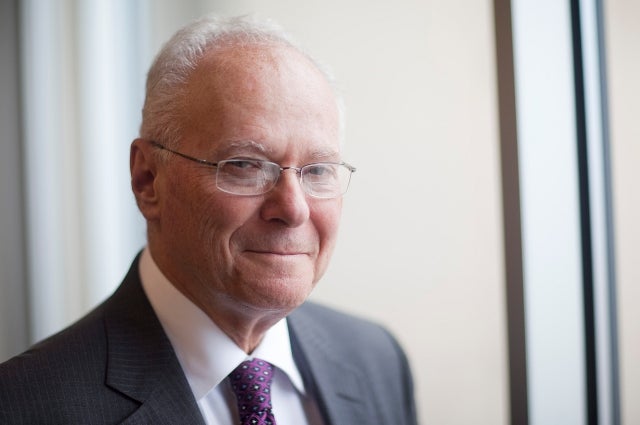 Harris Berman, the interim dean of Tufts University School of Medicine since December 2009, has been appointed dean.

Berman grew up in Concord, N.H., in a family where commingled talk of business and art rang through the house. His father ran a wholesale plumbing and heating supply company, and his mother was a well-known musician in the region who taught piano on the side.

Both parental influences left their mark. In later life Berman would head up not one but two HMOs—first as co-founder, medical director and executive director of the Matthew Thornton Health Plan, based in Nashua, N.H., from 1971 to 1986, and then as CEO of the Tufts Health Plan from 1986 to 2003. Musically, he served for a decade on the board of the Celebrity Series, the Boston-based arts organization, including six years as board chair. “When the Alvin Ailey Dance Company or Itzhak Perlman comes to town, it’s the Celebrity Series that brings them,” explains Berman, who hatched an informal chamber music trio during his early life as a physician and who continues to derive pleasure from playing piano when he can.

The new dean is well-known around the Boston campus, where he has taught since 1986. From 2003 to 2008, he was the Morton A. Madoff Professor of Public Health and chair of the Department of Public Health and Community Medicine. He served as vice dean from 2008 to 2009, before being named interim dean.

“As interim dean, Dr. Berman has done much more than oversee and guide the school’s operations,” Peggy Newell, the university provost and senior vice president ad interim, said in making the announcement. “He has adroitly balanced practical problem-solving with strategic thinking, and as a result, the school is noticeably stronger than it was two years ago. Dr. Berman has led efforts to develop new programs that are academically sound, build connections to other Tufts schools, help fulfill national needs for the delivery of health care and contribute to the school’s financial stabilization,” she said.

For someone who has accomplished so much, Berman, 73, can be something of a surprise in person. He is soft-spoken and low-key, deferring easily to others around the table, often with an accompanying laugh. Pressed to describe the dynamic at work in his marriage of 47 years, Berman doesn’t hesitate. “As in many marriages, opposites attract. I’m a relative introvert, and Ruth is a great extrovert,” he volunteers. “I’ve learned a lot from her about how to communicate effectively.” The couple, who live in Brookline, Mass., have four children and seven grandchildren.

We sat down with Berman recently to talk about his past, his accomplishments as interim dean and his aspirations for Tufts Medical School.

What led you toward medicine in the first place?

One of my uncles was a physician, and the most respected family member—a Tufts graduate, actually, Philip Berman [M25]. I always assumed I would be a doctor. I was good in school, and that’s what the previous generation always expected of the child who was best in school. From early on, I wanted to be a doctor—although as I was going through college as a pre-med student, I started to wonder: Do I really want to do this, or do I want to be in business management?

I liked leading things. In high school I was president of seven organizations. It was clear that I wanted to be leading something. I went back and forth on the question of my future, and it’s no surprise that I ended up doing both business management and medicine.

Tell us about your Peace Corps experience.

I was enamored of the idea of the Peace Corps from the moment that Jack Kennedy mentioned it in his speech at the University of Michigan. As soon as I could do that, I wanted to do it.

Why was it so appealing?

Well, I loved to travel; I was enamored with the idea of working in the developing world, and I wanted to do good—the same thing that attracted me to medicine.

What did you learn during your time in India?

The role of the doctors in the Peace Corps, primarily, was to take care of the Peace Corps volunteers and then to be involved with any projects the Peace Corps did on health. The first week I was there, I went around to meet various officials in New Delhi. I visited the Ministry of Health, and I was asking questions about facilities, trying to figure out where we would send Peace Corps volunteers if they got really sick. I was going down this line of questioning with this young bureaucrat and he said, “Young man, you Americans are used to having unlimited resources to take care of people. In India, we have very few rupees to spend on health. We spend it on public health, prevention.”

This was a whole new way of thinking for me, at age 27. I’ve never forgotten that guy. He certainly affected my thinking and my future. He was absolutely right. Even in this country, where we have lots of money and lots of resources, we still don’t have enough, and we should spend more than we do on public health and prevention. India got me interested in population medicine, in the whole question of how you prevent illness.

This eventually led me to get involved with starting HMOs. How do you take care of a population? How do you take the budget you have and do the most that you can for people in your care? How do you keep them healthy, and prevent illness? That experience in India was formative for me.

Our director was a man who had been the CEO of a steel company in California and took a few years off to do this. He was a very good leader who managed by being a team leader. He had a team of people, including me, a finance guy, a lawyer and a few other specialists. He set the direction and kept us all working together, but he let us each do our own thing. He didn’t try to tell me how to practice medicine, for example. He empowered me to do what I needed to do. A lot of what I learned about business and about leadership came from watching him operate.

Describe the origins of the Matthew Thornton Plan in 1971—your first HMO.

Two of us were coming straight out of training, right next door here [at Tufts Medical Center]. The other fellow was Jim Squires, a surgeon. We sat down over lunch one day and started talking, discovered we were both from New Hampshire, and discussed what we would do after we completed our training.

I was starting to think about putting together a group practice made up of ex-Peace Corps doctors, and having a project somewhere in the developing world linked with a clinic in this country, so that people could rotate. I actually put an ad in the New England Journal of Medicine and was looking to find people to do that. Jim had started thinking about opening a multi-specialty group with pre-payment—basically an HMO, before that term had been coined. It was clear that there was something here that we should pursue together. A weekend or two later, we got together with our wives and rode up to New Hampshire. Eighteen months later we opened up the Plan.

How hard was the business side for you?

My dad was a businessman, and I had heard business talk at the dinner table all my life. Business came naturally to me.

When you left Thornton to head up the Tufts Health Plan, how was that different?

Tufts was about the same size as Thornton, but it had much more potential. In 15 years we grew the Thornton Plan to be about as big as it would ever be. We had about 50,000 members there, which for New Hampshire was a lot, about 5 percent of the state population. When I came to the Tufts Health Plan, it also had about 50,000 members, but we grew that to a million in 17 years.

Has there been a constant thread in your life?

Looking back, I’ve had a few careers, which has really been fun. Aside from the Peace Corps, where it all started, I’ve practiced medicine for 15 years and started an HMO in New Hampshire. Then I moved on to running a large organization, the Tufts Health Plan, which grew into a $2 billion enterprise. I was the CEO of that and learned a lot about running a business on the job. And then, coming to academe, I’ve had to learn a whole different way of thinking. Yet leadership is leadership. It’s really about how you relate to people—the people who are your team, the people you serve. I’ve taken a lot of comfort in how easily leadership skills are transferable from venue to venue.

On the national front, what outcome would you like to see from the health-care debate?

I’d certainly like to see health reform success, which means that we get everyone in the country covered by health insurance. We’ve got a long way to go on that. It will only be successful if we can figure out new models of providing care that don’t cost so much. The country can’t afford to keep escalating the cost of care the way it’s been going. There’s a real challenge to rethink what we do, and to help the public rethink what its expectations are, so that America can live within a budget and provide good care without breaking the bank.

What changes have you witnessed here at the medical school?

In addition, I think that exposing our students to global health, and having them get experience in the developing world, gives them insight into some of the issues we have in our own nation. When you see how other countries handle them, you realize that there are other ways of dealing with public health issues that we just don’t do very effectively here.

Our students come back and say, “That was a great experience, but we’ve got problems two miles from here that are very similar to those that we ought to be dealing with.” So it inspires our students to get involved with disadvantaged patients in Boston, or New York or rural Maine.

Where should our medical school be in five or 10 years?

One of the things I’ve worked on aggressively, and where we’ve been successful in a short period of time, is turning the school’s finances around by increasing our revenue-producing programs. We can cover our expenses now, which we weren’t doing before. That now gives us the luxury of thinking about how best to utilize our resources.

How might having Tony Monaco as president of the university make a difference?

I see this as a wonderful opportunity for the medical school to be able to work with Tony. I’m looking forward to talking with him about what a great medical school should look like. The fact that he comes to us from Oxford University—as good a place as you can find anywhere in the world, but different because it’s not American—means that we can learn a great deal from his experience there.

I think his perspective may help us think outside the box. That should be helpful to us. And the fact that he’s a medical researcher is a further wonderful opportunity for us. What I’m looking forward to in the next few years is working with Tony to expand our vision of what Tufts Medical School can be.