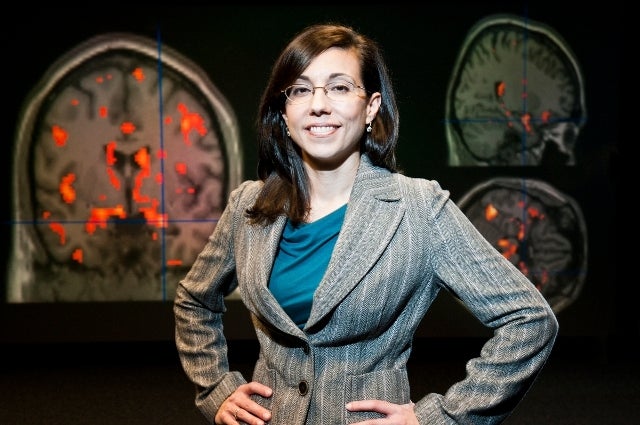 People who suffer from post-traumatic stress disorder (PTSD) also exhibit neurological abnormalities in their brains that may be inherited, says a Tufts psychologist who has been studying the brains of PTSD patients for nearly two decades.

If these anomalies are hard-wired into their DNA, it would give physicians a way to predict those at risk for PTSD, says Lisa Shin, a professor of psychology in the School of Arts and Sciences. She is using brain imaging to study identical twins—volunteers from the Vietnam-Era Twin Registry—to help determine whether the anxiety disorder is indeed rooted in genetics.

In people with PTSD, Shin has discovered, the part of the brain that channels emotion is more active than in people without PTSD, and the part that controls emotional response is less active. “If you see the same brain abnormalities in the twin with PTSD, and in their identical co-twin without PTSD, then those abnormalities could be a familial risk factor,” Shin says. “And it could put the co-twin who did not go to Vietnam at higher risk for PTSD, should he ever experience a major trauma.”

Shin is the principal investigator on this current research, the third round of a study funded by the National Institutes of Health’s National Institute for Mental Health. The work is being done in conjunction with colleagues at the Massachusetts General Hospital’s Department of Psychiatry, Harvard Medical School and the VA Research Service, in Manchester, N.H. Their most recent results were published in July in the American Journal of Psychiatry.

Shin is hopeful her findings will help eliminate some of the stigma associated with PTSD. “I think it is helpful for people to understand this is brain-based,” she says. “Some people are ashamed; they are embarrassed, and they shouldn’t be.”

PTSD is all too common, with wars, natural disasters and tragedies such as the 9/11 attacks. “Its frequency and our lack of understanding of the biological origin and optimal treatment make it something we cannot ignore,” says Shin.

Triggers in the Brain

It took years and hundreds of test subjects before Shin and her colleagues fully mapped the areas of the brain involved with PTSD. She used functional MRIs, or fMRIs, to conduct real-time brain scans at Massachusetts General Hospital, where she holds an appointment in the psychiatry department. Functional MRI, a technology developed in the early 1990s, essentially measures blood flow in the brain. Increased blood flow signals heightened neurological activity; lower flow indicates lessened activity.

Shin took brain images of war veterans, firefighters, childhood abuse victims and others who had experienced a range trauma-producing events: witnessing the serious injury or death of a friend, being exposed to domestic violence or being involved in a serious automobile accident.

Imaging volunteers’ brains while they are experiencing symptoms, which include distress, intrusive memories and anxiety, as well as using cognitive tests in which participants look at images unrelated to their trauma, have identified unusual activity in three particular brain regions in those with PTSD.

The amygdala, deep inside the temporal lobe, picks up on potential threats in the environment. This is normally very adaptive, but in PTSD sufferers, the amygdala is hyperactive. “The amygdala is the first responder to potentially threatening external stimuli,” Shin says. “It can trigger the fight or flight survival response.”

The medial prefrontal cortex, located just behind the forehead, normally suppresses emotions and mediates conflicting thoughts, but is often underactive in PTSD patients. Normally, following a strong emotional reaction, the prefrontal cortex kicks in to put an emotional situation in context. But if that area of the brain is underactive, the control mechanism may be less effective.

Finally, the dorsal anterior cingulate cortex, also deep in the brain’s frontal lobe, is involved in fear learning, among other things, but in those with PTSD, this, too, is in overdrive.

Understanding these neurological checks and balances is helping Shin investigate the brain imaging predictors of treatment response in PTSD. Currently, patients are prescribed medication—antidepressants or benzodiazepines, Valium-like drugs—or given exposure therapy, where they experience the environment or event that triggers a PTSD reaction. Some people respond well to treatment, Shin says, while others don’t. We don’t know why, but her research could provide some answers.

“We are doing imaging before exposure therapy to try and predict who will respond well to this treatment,” says Shin. “Although the study is not yet complete, so far we are finding that people with a more highly activated medial prefrontal cortex do better in exposure therapy, and those who had a hyperactive amygdala do worse.”

Shin plans on expanding her research to compare brain responses to very different kinds of events—“sexual abuse versus witnessing bodily injury in a car accident or a war, for example,” she says. “But I can say we do now know, with some certainty, that this is a neurologically based disorder.”