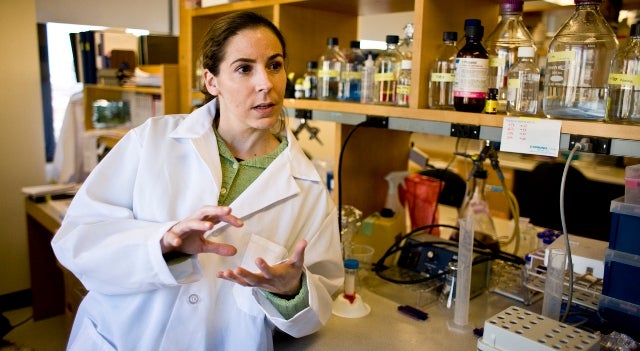 This year, more than 230,000 women will be diagnosed with breast cancer, according to the National Cancer Institute. That’s a daunting statistic, but it doesn’t tell the whole story. Breast cancer is not just one disease. There are several distinct forms of breast cancer, each with different characteristics and each demanding its own course of treatment.

Scientists suspect these differences have to do with what kind of cells gave rise to the tumor in question, but until now, no one had identified the cellular origins of the various tumor types. In a recent study, the Tufts cellular biologist Charlotte Kuperwasser, an associate professor at the School of Medicine, and her colleagues do just that. The implications eventually could lead to earlier and more precise diagnoses of breast tumors.

The team, which includes scientists from Tufts’ schools of Medicine and Dental Medicine, the University of North Carolina at Chapel Hill and Harvard Medical School, reported their findings in the early online edition of the Proceedings of the National Academies of Science (PNAS) in late September.

The majority of breast cancers develop in the milk ducts, and these so-called ductal carcinomas fall into several categories. One tumor type shares genetic and molecular characteristics with the milk-producing cells, called luminal cells, which line the inside of the duct. Another, more aggressive form resembles the cells from the duct’s outermost layer, the basal cells. That’s why these two common types of breast cancer are known as luminal- and basal-type carcinomas, respectively.

But no one knew for sure whether those cancers originated in their namesake cells. Additionally, rare forms of the disease, known as metaplastic carcinomas, contain cells that bear little resemblance to any healthy breast cells.

To determine the origins of each form of cancer, Kuperwasser and her team, including first author Patricia Keller, a postdoctoral associate in Kuperwasser’s lab, took healthy breast tissue discarded from breast reduction surgeries and sorted the luminal cells from the basal cells. Next, the scientists introduced cancer-causing genes, called oncogenes, into the cells and implanted them into the mammary tissue of mice.

Weeks later, the researchers removed the resulting tumors to see which kind of cancer had developed from the different types of cells. It turned out that while luminal breast cells infected with oncogenes indeed gave rise to the luminal-type tumor, those same cells also gave rise to the the basal-type tumor. Meanwhile, it was those basal cells that led to the rare metaplastic cancers.

Scientists have been kicking around the idea that different classes of tumors arise from different kinds of cells for years, says Keller. But the researchers’ work was unique in that they started with human breast cells, not mouse mammary tissue. That way, the resulting tumors more closely resemble human cancer, giving breast cancer researchers better insight into the disease.

“Mouse models have certainly tried to address these sorts of questions,” says Keller. “But there are still some differences between the types of tumors you get out of a mouse model.”

The team’s model could serve as a platform for developing drugs or other therapies tailor-made for each tumor subtype. Moreover, the model could help researchers identify physical characteristics, or biomarkers, that would allow them to distinguish between lesions—non-invasive groups of cells at the earliest stages of cancer—that would give rise to luminal- or basal-type tumors.

“That could help us understand how to make decisions so we don’t over- or under-treat patients,” says Keller.