The Art of Confrontation

Aboriginal artist Richard Bell doesn’t pull any punches in his take on Australian society, on view now at the Tufts Art Gallery 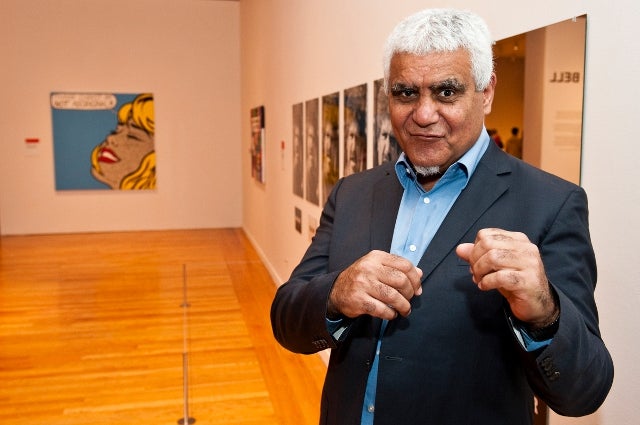 The Australian Aboriginal artist Richard Bell says that he is just “laying it out there, showing people how it is.” But his current exhibition at the Tufts Art Gallery, Uz Vs. Them, which runs through Nov. 20, clearly demonstrates how the work—and the man—are far from that simple.

Paintings in the exhibition grab you with slogans, like “Aboriginal Art, It’s a White Thing,” or “Kick Somebody Else,” set against abstract, sometimes Jackson Pollack–like backgrounds. Among the four videos in the show is Scratch an Aussie (2008), in which Bell plays a black Freud psychoanalyzing white Australians, and alternately a patient seeking to sort out his fractured identity as an Aboriginal in Australia’s divided society.

In person, Bell moves fluidly from urbane, witty, intellectual observations to earthy, Aussie slang-ridden remarks, often punctuated by a swear word or two. He and his art keep you off balance, allowing no comfortable armchair assumptions.

Bell lives what his art evokes. An Aboriginal born in 1953 in an openly racist Australia, he lived his first two years in a tent, until his parents had collected enough discarded tin to build a shack. His family lived off the land, because in the 1950s, Aborigines were not allowed to shop in town.

In 1959 his mother moved Bell and his brother from Queensland to Darwin, in the Northern Territory, where she worked in the Retta Dixon Home, built to house Aboriginal children taken by the government in an effort to assimilate them and at the same time undermine Aboriginal groups. These children became known as the Stolen Generations, the approximately 50,000 Aboriginal and Torres Strait Islander indigenous children who were taken from their families between the 1860s and the 1970s. 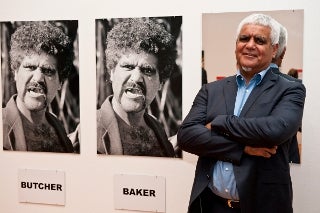 Richard Bell with his work <i>Pigeon Holed</i>, 1992. In it, he portrays himself in six repeated images as an “angry black man” in an effort to challenge the negative stereotype associated with Aboriginal men. Photo: Alonso Nichols
Bell’s experiences of racism are the root of his art, which gives voice to the anger and hidden truths of the indigenous Australians fighting to win back control of their homelands, their place in society and their cultural identity.

“It is not like the Aboriginal people to have opinions and voice them loudly, because they will more often confer the right to speak for them on someone else,” Bell said at the exhibition opening. “So to speak as an artist, as an Aboriginal, is quite a different thing. I’ve been doing this long enough now that people allow me to speak for them—and I do that by speaking for myself. I don’t speak for anybody, I speak for myself.”

Bell’s experiences allow him to express himself in ways that other artists cannot—his art is political, and his intentionally provocative public persona is the cornerstone of his art. He is in the tradition of artists like Andy Warhol, who remain inseparable from their art.

Consider the title video of the exhibit Uz Vs. Them (2006), in which Bell plays the lead role as a boxer in a promo for a match between himself and “the angry white dude.” His verbal jabs against Aussie bigotry are telling. Bell challenges other stereotypes by posing as an aggressive savage in the cover photo for the exhibition catalog, a shot taken from Scratch an Aussie.

Bell knows what it is to be an outsider—in his homeland and now in the art world—and how to use his status to advocate for change. 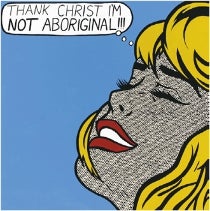 Richard Bell, <i>The Peckin’ Order</i>, 2007.
Take his 2007 painting The Peckin’ Order, a clear riff on Roy Lichtenstein’s melodramatic comic strip parodies. In the Lichtenstein original, Shipboard Girl, a blonde woman, large red lips slightly parted and eyes closed, throws her head back ecstatically against the left side of the canvas. Bell replicates the blonde, except he lays her against the right side of the canvas, reversing expectations, changes her skin tone to black and adds the thought bubble, “Thank Christ I’m not Aboriginal!!!”

It is part of Bell’s series of paintings, called Made Men, which parodies Lichtenstein. In another, he takes Lichtenstein’s bedroom scene “Interior with Water Lilies,” reverses the orientation of the bed and adds to a wall another Lichtenstein cartoon woman with the thought bubble “Oh Richie…I love you too but…” The implied “you’re Aboriginal” is brought home by Bell’s own painting hanging over the bed that mixes traditional Aboriginal art techniques with the words “[I]AM NOT SORRY.”

“Richie” is Bell’s persona in this and other series, a bit like Hitchcock making cameos in his films.

It is fitting that Bell’s paintings and videos appropriate and manipulate a range of art genres, because among his arguments with white Australia is the appropriation not just of Aboriginal land but of its traditional art. That art, he maintains, is used to bolster Australia’s image and tourism, while the government hides the poverty, lack of schools and roads and racist attitudes that are part and parcel of Aboriginal life.

A self-professed follower of Edward Bernays, the father of American public relations, Bell often uses backgrounds in the brown/red color palette, small dots, lines, squares and the boomerang shapes that typify traditional Aboriginal art and overlays them with bold text messages: “We were here first”; “There is no black problem”; “I am not a noble savage”; and “Aboriginal art, It’s a white thing.” This, he says, sends a message that is clear and can be broadly understood, just like ads or propaganda.

“When I first started,” Bell says, “there were Aboriginal artists doing work, but they used a lot of metaphor. The work was subtle.” But his work, he adds, “is kind of not subtle, because I thought, ‘There is no point in talking in metaphor to most people, because they don’t get it.’ ”