“Phantom vibration syndrome” keeps doctors thinking they are being paged, even when they aren’t 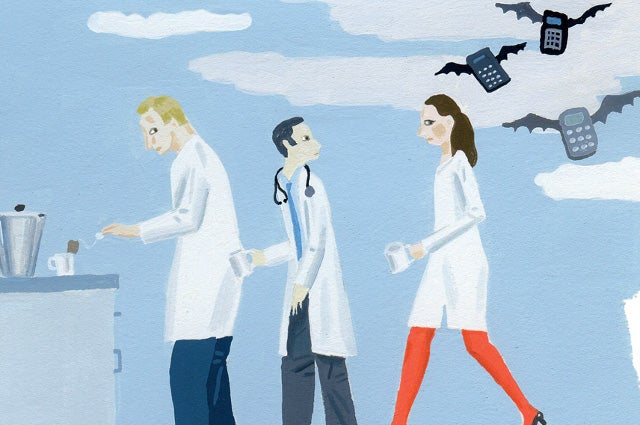 Hospital cell phones and pagers going off like mad during busy times is a common occurrence. But a recent study, published in the online edition of the British Medical Journal, has found that young doctors are frequently responding to the vibration near their belt that signals an incoming call even when no such call has been made. “It usually happens when I’m sitting down at my computer and I feel like there’s something, but there isn’t,” said a fourth-year urology resident cited in the study.

The phenomenon is known—and of course it has its own name—as “the phantom vibration syndrome.” Among personnel surveyed at one medical center, some 68 percent of respondents said they had experienced the phantom buzzing at least once, with 13 percent claiming they felt it on a daily basis.

Michael Rothberg, the lead author of the study and an associate professor of medicine based at Baystate Medical Center who helps direct the residency program there, isn’t surprised.

“If you think about it, you can feel your clothes touching you,” he says. “But you don’t want to be thinking about that all the time, because then you wouldn’t have room to process all the other stuff. So your brain is filtering all of this information that comes up, and for most of it, it’s saying, ‘It’s not important. Don’t worry about it.’ ”

The study found that younger doctors, and residents in particular, were more apt to jump at phantom signals than older physicians. “If an attending [physician] doesn’t return a call right away, there are not a lot of repercussions because they have some seniority,” one observer noted. “If a resident doesn’t respond, all hell breaks loose.”

This article first appeared in the Fall 2011 issue of Tufts Medicine magazine.