If you are what’s called an “older adult”—in the neighborhood of 70 and northwards—and want to know the best diet for someone your age, nutritionists at Tufts University have your back. They’ve just released the latest recommendations based on MyPlate, the federal government’s new food group symbol, but specifically tailored for older Americans.

The new recommendations, MyPlate for Older Adults, call attention to the nutrition and physical activity needs of seniors. “Although calorie requirements decline with age—a result of a slowdown in metabolism and physical activity—nutritional requirements remain the same or in some cases increase,” says Alice H. Lichtenstein, a senior scientist at the Jean Mayer USDA Human Nutrition Research Center on Aging (HNRCA) at Tufts.

“MyPlate for Older Adults provides examples of foods that contain high levels of vitamins and minerals per serving and are consistent with the federal government’s 2010 Dietary Guidelines for Americans, which recommend limiting foods high in trans and saturated fats, salt and added sugars, and emphasize whole grains,” says Lichtenstein, the Stanley N. Gershoff Professor of Nutrition Science and Policy at the Friedman School.

MyPlate for Older Adults replaces the Modified MyPyramid for Older Adults. It is the third resource based on updated USDA food icons and created specifically for older adults by Lichtenstein and Helen Rasmussen, a senior research dietitian at the HNRCA.

You can print out MyPlate for Older Adults on the HNRCA website. The plate features different kinds of vegetables and fruits that are convenient, affordable and readily available. Unique components include icons for regular physical activity and an emphasis on adequate fluid intake, both of particular concern for older adults.

The following foods, fluids and physical activities are represented on My Plate for Older Adults: 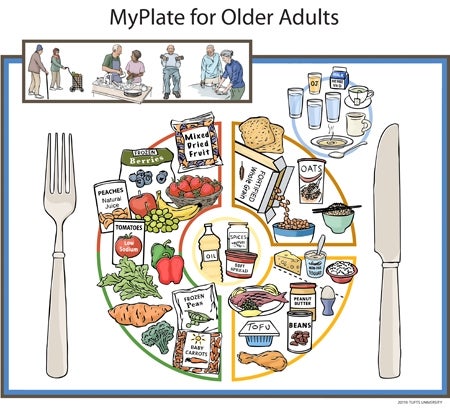 Illustration: Betsy Hayes
“Half of the MyPlate for Older Adults includes fruit and vegetable icons, which reflects the importance of eating several servings of fruits and vegetables per day in a range of colors,” says Rasmussen. “Consuming a variety of produce with deep-colored flesh, such as peaches, berries, tomatoes, kale and sweet potatoes, introduces a larger amount of plant-based chemicals, nutrients and fiber into one’s diet.

“We also include icons representing frozen, pre-peeled fresh, dried and certain low-sodium, low-sugar canned options because fruits and vegetables in those forms contain as many or more nutrients as fresh,” Lichtenstein says, “and they are easier to prepare, are more affordable and have a longer shelf life.”

MyPlate for Older Adults provides examples of whole, enriched and fortified grains because they are high in fiber. Suggested protein sources include plant-based options, such as beans and tofu, as well as fish and lean meat.

“The 2010 Dietary Guidelines for Americans emphasize limiting sodium intake to less than 1,500 milligrams per day and we echo that on the MyPlate for Older Adults by suggesting alternatives to salt, such as flavoring with spices and choosing the low-sodium options of items such as canned vegetables,” says Lichtenstein. “Blood pressure tends to increase as we age, so it is especially important for older adults to monitor dietary salt and, for most of us, try to find ways to decrease intake.”

The plate contains water, tea, coffee and soup to highlight the common, age-related decline in thirst that can put older adults at risk for dehydration. Also represented are a fork and knife, which serve as reminders to put down remote controls and smart phones and occupy both hands with eating utensils. “The focus should be on the enjoyment of food and beverage, on the amount consumed and, whenever possible, on the opportunity for social interaction at mealtimes,” Lichtenstein says.

“Government statistics continue to show that elderly obesity rates are on the rise, indicating there is a need to educate older adults about the importance of moving regularly and consuming a diet of nutrient rich foods with a calorie content matched to energy needs,” Lichtenstein says.

Lichtenstein advises older adults who are considering transitioning to a healthier lifestyle to talk with their primary health-care providers before making major changes to their diets and physical activity routines.