When trouble heads your way, here's how you can keep your animals safe 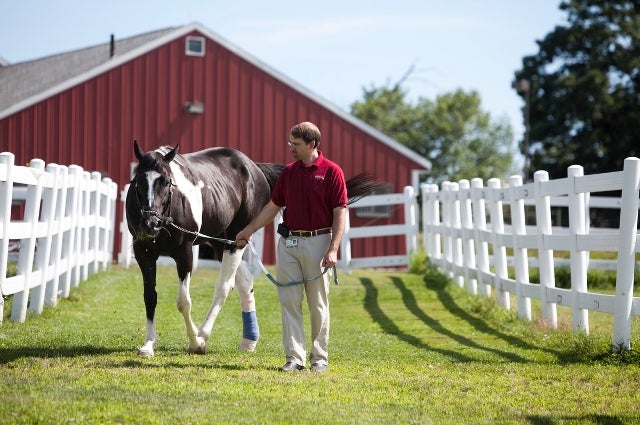 In just 25 seconds, they lost everything.

While JoAnn Kass, her husband, grandson and their three dogs huddled in the basement, a fast-moving tornado plowed through central Massachusetts in June, leveling their farm in Brimfield.

“It sounded like we were being attacked by aliens,” Kass says. “We heard the roof go first, then the sucking sound of everything being pulled out of the house.”

There was nothing left: house, barn, car, truck—all gone.

She and her husband, Steven Bush, raced to the paddock to check on their four horses. They found Leader nuzzling the body of their quarter horse, Dakota, killed after being hit in the head by a 4,000-pound horse trailer that the twister had tossed the length of a football field. Their 9-year-old paint horse, Cajun, had a finger-sized shard of wood protruding from his right rear leg.

It’s hard to obtain accurate statistics on just how many animals, large and small, are lost, injured or killed in natural disasters. The American Society for the Prevention of Cruelty to Animals estimated in mid-summer that more than 600,000 cats and dogs had been affected by natural disasters since January—and that was before Hurricane Irene powered up the East Coast in August.

Further complicating matters for first responders to these forces of nature: 61 percent of pet owners say they would not evacuate to escape a natural disaster if they had to leave their pets behind, according to a Zogby International poll.

Still, governments and emergency responders only recently started considering the plight of animals when preparing for disasters. The impetus: Hurricane Katrina, which claimed nearly 2,000 human lives after it slammed into the Gulf Coast in 2005.

Despite evacuation orders up and down the coast, a significant number of residents chose to take their chances with the rising flood waters and damaged levees rather than abandon their pets. Back then, most evacuation vehicles and shelters did not allow animals.

A year after Katrina, Congress enacted the Pet Evacuation and Transportation Standards Act, requiring state and local governments to develop emergency and evacuation plans that include pets and service animals.

In the Bay State, the all-volunteer State of Massachusetts Animal Response Team (SMART) trains and coordinates teams of veterinarians, veterinary technicians, animal-control officers and shelter workers to conduct animal search-and-rescue missions, operate emergency shelters for pets and care for animals in the field following a disaster.

SMART works as an adjunct to the traditional emergency responders: firefighters, police officers and the National Guard. “We fold into the existing emergency management system because we don’t want to be an additional burden,” says David Schwarz, president of the SMART board, who taught a course on emergency response and disaster medicine at the Cummings School earlier this year. “And we can’t have people [doing unauthorized] searches for animals in buildings that might collapse. That adds the potential for even more casualties.”

Being plugged into the emergency management system helps animal rescue teams operate more efficiently, says Bonnie Smith, V93, a large animal veterinarian who was deployed by Massachusetts state veterinarian Lorraine O’Connor, V88, to Brimfield on June 2, the morning after two tornadoes had torn through the region. Over the next 24 hours, Smith checked on 175 horses in the town, where 100 homes were damaged or destroyed.

“I helped people climb over rubble to get out and made arrangements for their animals to be taken care of,” says Smith. “The National Guard brought in water trucks. There was so much assistance at my disposal. I was able to tap into central command and say, ‘We need this or that,’ and help came extremely quickly.”

You Go, They Go

Disaster response veterinarians recommend that folks take their small animals with them if they have to evacuate. Most emergency shelters for people still don’t allow pets, but in Massachusetts and other states, disaster preparedness plans now contain provisions for temporary animal shelters, either at the same location as the human shelters or nearby. SMART, for example, sheltered pets near emergency housing for people during hurricanes Earl and Irene.

“It’s a great source of comfort, both for the animals and the people, to be able to see each other,” says Schwarz. “When everything else in your world is totally upside down, it becomes therapy for everybody.”

Evacuating people and pets simultaneously can save lives, says Dan Hebert, V01, who serves on the board of the Rhode Island Animal Disaster Response Team. When the Pawtuxet River overflowed its banks in Warwick, R.I., in March 2010, local officials told residents to evacuate without their pets, even though shelters for animals had already been set up.

“A major apartment complex right on the river flooded, and the cops ended up going in with boats to rescue pets. It was just a mess,” says Hebert. The rescuers were endangered “by having to go into a water-filled area with live wires to get cats and dogs.”

Of course, not every impending disaster comes with a lengthy warning, as was the case with the Massachusetts tornadoes. Once the storm had passed, Kass, the horse owner, made two phone calls: the first to her equine veterinarian, Paula Orcutt, and the second to 911. It took Orcutt more than five hours to navigate through downed trees and piles of rubble, often crawling on her hands and knees, to reach Kass and the injured Cajun, around one o’clock in the morning. She did her best to remove the wood embedded in his leg and administered antibiotics and an anti-inflammatory.

It took another 16 hours, 25 rescuers, eight chain saws, a Bobcat and a tractor to clear a path so that the Animal Rescue League could trailer Cajun to the Cummings School’s Hospital for Large Animals. Tufts surgeon Carl Kirker-Head eventually would perform three surgeries to save the horse’s life.

Planning for the Worst

It’s important for animal owners to have a disaster plan, says Smith, the large animal veterinarian. “When you have a plan in place, you’re more likely to be able to help yourself in case somebody can’t get to you.”

Disaster plans for your pets should borrow from best practices for people, says Dauksewicz, of the Red Cross. “Make a disaster kit and stay informed and ready,” he advises.

It’s also important for rescuers and other emergency personnel to be able to ID your animal in case you get separated from it or your pet gets lost. Whether you own a dog, cat, horse, goat or llama, a microchip is the best way to ensure you and your animal are reunited.

“In the shelter I volunteered at following Hurricane Charley, in 2004, maybe three out of the 300 animals we received were micro-chipped,” says Lori Prantil, V13. “Do you remember how after September 11 people would put up posters of their missing family and friends? Well, that shelter had a wall of posters from people who were missing their pets. People were constantly coming to the shelter to ask, ‘Do you have my animal?’ and we didn’t. It was awful. Only once did I get to hand this woman her cat. She was crying, and I was crying, and it just really touched me more than anything I’ve ever done.” (So much so, in fact, that at age 39, she left a lucrative management job at AOL to enroll in veterinary school.)

If you have large animals or farm animals, the recommended disaster preparedness protocol can feel a little counterintuitive. 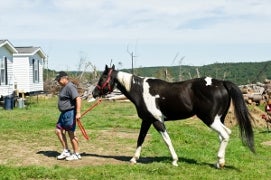 Steve Kass walks with Cajun at his home in September. Photo: Alonso Nichols
“Whenever there’s going to be a chance of high winds and flying debris, let your animals out,” says Smith. “Your instinct is to keep them inside and protected. But in the barn, they’re susceptible to anything blowing around because they are stuck in a stall. If they’re outside, they can get themselves into the lowest spot and out of the wind. The animals know their pastures way better than we do because their whole life depends upon it.”

Kass says if she had locked her horses in the barn when the tornado warnings were first issued, “there’s no doubt they all would have been killed.”

In August, Cajun returned home to Brimfield, where Kass and her husband are living in a trailer while their home is being rebuilt. But the homecoming was hardly serene: Hurricane Irene was headed for the Northeast.

A representative from the Federal Emergency Management Agency “called us to say we could not stay in that mobile home with a hurricane coming,” Kass says. “I was frantic. But at least with a hurricane you have enough warning to move everyone to a safer place.”

Their three horses rode out Irene at a nearby farm. Kass, her husband and the dogs spent the night at a pet-friendly hotel nearby. “What I’ve learned is if it doesn’t breathe, it doesn’t matter,” she says. “Everything else you can get through.”

A three-day supply of water for each animal

A three-day food supply, plus a can opener and spoon for wet food

Photos of your pet, preferably with you in them, in case you need to prove ownership

A collar with ID (plus a leash for dogs); halters and leads for large animals

Bowls for small animals and buckets for large animals

A crate or pet carrier

A small bag of cat litter, scoop and litter box for cats and newspapers and plastic bags for dogs

A map of your area with possible evacuation routes

Contact information for your veterinarian and your own emergency contacts

For more tips about disaster preparedness, go to http://www.avma.org/disaster.