Air pollution decreases as the economy slows, affecting us all, a Tufts researcher finds 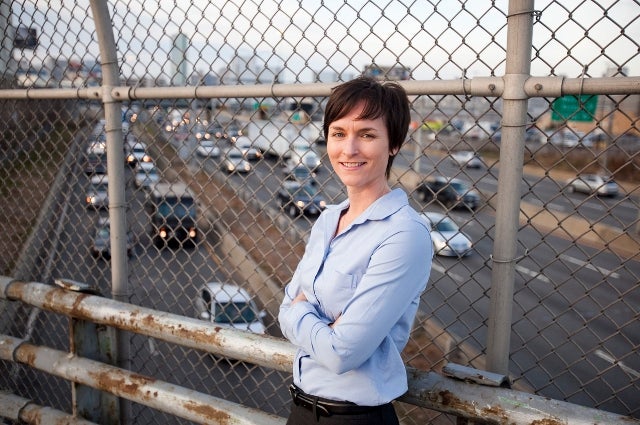 In the middle of a prolonged economic downturn, it’s hard to find bright spots. But it turns out there’s at least one upside to high unemployment: it apparently reduces air pollution enough to improve our health.

That’s what the environmental economist Mary Davis found when she compared unemployment rates and air pollutant levels in New Jersey between 1971 and 2003, and in California from 1980 to 2000.

An assistant professor of urban and environmental policy and planning in the School of Arts and Sciences, Davis found a direct correlation between rising unemployment and declining air pollution, likely due to accompanying slowdowns in commercial trucking, commuting, driving to shopping centers and stores and recreational travel.

Using that data, she has created the first predictive model of air pollution, based on the hypothesis that the nation’s economic engine drives air pollution rates. The model allows her to gauge air pollution even when no direct data is available, giving new insights into our health and how well some environmental policies are working.

“To accurately assess the impact of air pollution on cancer rates, for example, you need to see exposure over a lifetime,” says Davis. The trouble is, little data on air pollution existed before the 1970s.

“Now we can use this model to step back in time using economic data and epidemiological records,” she says. “We can fill in the gaps in human exposure to air pollution, so we can better understand lung cancer rates, and other diseases, in large epidemiological studies.”

Davis used New Jersey and California because, unlike most states, they had kept records of air pollution over several decades. New Jersey had  tracked coefficient haze, a marker of particles in the air generated primarily by cars and trucks. In California, there were records of both coefficient haze and nitrogen dioxide, a component of the reddish-brown toxic gas that makes acid in your lungs.

In California, unemployment rose from 4.9 percent in 2006 to 12.4 percent in 2010. During those four years, coefficient haze declined 16.8 percent and nitrogen dioxide by 12.2 percent, according to her latest study, which is under revision for publication in the American Journal of Public Health.

During that same period in New Jersey, the average of similar unemployment peaks shows that coefficient haze declined by 15.1 percent, according to a study she published in July in Environmental Health Perspectives, a journal of the National Institute of Environmental Health Sciences.

Overstating the Impact of Regulation

Davis’s research is contributing to a decade-long NIH-funded study analyzing the trucking industry, air pollution and lung cancer rates directed by her colleagues at Harvard University, including Thomas J. Smith, professor of industrial hygiene at the Harvard School of Public Health.

“Estimating long-term exposures [to air pollution] is a central problem for understanding the exposure-risk relationships for chronic diseases such as cancer,” Smith says. “Exposure data rarely exists during critical early exposure periods, 40 or 50 years ago. Her model will broadly affect data analysis in this field. No one, until Davis, has examined it analytically from an economic perspective.”

Davis’s model also has implications for environmental regulation and policies. If there is an improvement in air quality, how much was due to regulatory control and how much to the changing economy, she asks.

“It seems you may be likely to overstate a policy’s success when it occurs during an economic recession,” Davis says. In southern California, for example, local governments have enacted stricter regulations in an attempt to reduce air pollution at the state’s ports, mostly by retrofitting trucks, forklifts, boats and other air pollution generators to reduce emissions.

Data from air quality monitoring stations in and around the Port of Los Angeles show concentrations of elemental carbon, an indicator of diesel particulate matter, were down in 2010 by 50 percent compared to 2006, according to Clean Tech Los Angeles. But that number credited to new regulations would drop to 30 percent when Davis’s economic indicators were factored in.

Davis says she hopes her work will open the door to future studies that will use estimates of historical exposure to air pollution to help understand lung cancer and other diseases, as well as improve environmental policies.

“It is more than just an interesting phenomenon,” Davis says.