A retrospective of Nancy Holt’s early work at the Tufts Art Gallery shows how she re-imagines earth, sun and sky 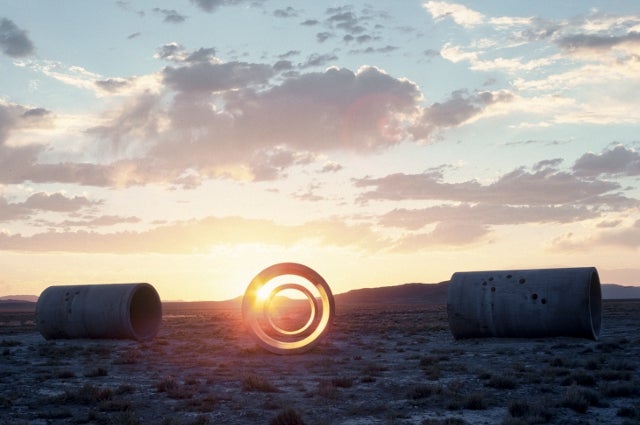 In the middle of the desert in southeastern Utah, many miles from the nearest interstate, four large concrete cylinders lie in an X pattern, like lost sections of giant pipes at rest. On Dec. 21, at sunrise and sunset, sunlight streamed perfectly through them, just as it has during the winter and summer solstices for the past 36 years. Called Sun Tunnels, they are the creation of Nancy Holt, J60, an artist whose work encompasses sculpture and site-specific installations, film and photography.

Holt’s art has been exhibited widely, from the Museum of Modern Art in New York to the Tate Modern in London. Now her work is coming to the Tufts University Art Gallery, with the exhibition Nancy Holt: Sightlines, which runs from Jan. 19 through April 1 and is free and open to the public. The exhibition focuses on 40 works from the 1960s and ’70s, a formative period for Holt’s art.

Holt lives in rural Galisteo, N.M., where the wide-open sky creates a horizon that hints at the curve of the earth. That primeval landscape, more than anything else, has inspired her 45-year career as an artist, exploring earth and sky and human perceptions of time and space. “My first trip out West in 1968 was such an eye-opener,” she says. “I had a very powerful experience that changed the way I do art and how I view the world.”

Your browser does not support the video tag.

Experience Nancy Holt’s “Sun Tunnels” through this slideshow, which captures sunlight and shadow in one tunnel photographed every half hour from 6:30 a.m. to 9 p.m. on July 14, 1976. Note how the pattern of the constellation appears when the sun is overhead. Photos by Nancy Holt, “Sunlight in Sun Tunnels,” 1976. Slideshow: Taylor McNeil

Sightlines includes, for example, a selection of six photographs from a much larger series titled Western Graveyards, taken during her visit to old cemeteries in Virginia City, Nev., and Lone Pine, Calif., in 1968. Each aging grave is touchingly unique and frequently surrounded by a fence, each one different from the others in materials and design. “People sing songs about how free they feel in open spaces, yet when you are in the desert in so much vastness, there is a desire for containment,” says Holt. “I became totally absorbed shooting photographs in those graveyards, and all of my work was affected by it.”

Other notable works in the exhibition are the videos Swamp (1971, in collaboration with Robert Smithson), where we look through the eye of Holt’s hand-held camera as she and Smithson stumble along pushing through dense reeds in a New Jersey swamp, and Boomerang, (1973, in collaboration with Richard Serra), a self-reflective monologue in which Holt hears her own voice in a time-delayed audio feedback, and a four-monitor installation, Points of View (1974), that juxtaposes partially masked exterior views of New York City from the north, east, south and west windows at the Clocktower Gallery in New York with conversations in which two people—different ones each time—discuss what is being shown.

Holt says she’s especially pleased to be exhibiting her work at her alma mater, noting that she turned down invitations to talk at the Louvre and the Museum of Modern Art recently due to her busy schedule and the Tufts exhibition opening. 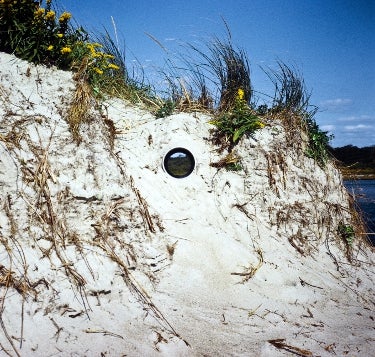 Nancy Holt, “Views Through a Sand Dune,” 1972, Narragansett Beach, Rhode Island. Cement-asbestos pipe, sand. Photo: © Nancy Holt/Licensed by VAGA, New York
An only child growing up in Massachusetts and New Jersey, Holt says she spent much of her youth “exploring my inner world.” A biology major at Tufts, she pursued an interest in unusual plants and animals and natural systems and dropped in on art lectures at MIT. At one, she saw Abstract Expressionist paintings projected alongside highly magnified images of tissues and cells—a connection between art and science. As a junior in college, she started traveling to New York City, where, among other artists, she met Robert Smithson in 1958, whom she later married.

With a career path as an artist now in firm sight, Holt, Smithson and a handful of others founded what became the Land Art movement in the 1960s. It rejected what the artists called the artificiality and commercialism of the museum world. They chose to create works inspired by and inseparable from their environments, art that could be neither bought nor sold.

Among these is Holt’s renowned Sun Tunnels, four 22-ton concrete pipes, 18 feet long and 9 feet 3 inches in outer diameter, created between 1973 and 1976. For several days before and after the winter and summer solstices, sunlight streams through the tunnels at sunrise and sunset. The top half of each tunnel is pierced by holes showing the stars in one of four constellations: Draco, Perseus, Columba and Capricorn. Sunlight shines through the star-holes and forms spots of light inside the tunnels in ever-shifting constellation patterns. Holt says the work gives viewers a way to experience the vastness of the land and feel a greater connection to the universe. (Visitors to the Tufts Art Gallery exhibition will be able to experience Sun Tunnels through Holt’s video and photos of the installation.)

To make Sun Tunnels, Holt worked with engineers, astronomers, concrete pipe manufacturers, drillers, truck drivers and others. Two grants paid for part of the project; she financed the rest on her own. The work can be seen on the 40 acres of Utah’s Great Basin Desert that Holt purchased specifically for it.

While planning Sun Tunnels, Holt completed her first large-scale outdoor work, Hydra’s Head (1974), along the Niagara River in Artpark, Lewiston, N.Y., a series of reflecting pools configured like the stars in the head of the constellation Hydra. It will be seen in photographs at the exhibition. It was this installation that made her realize her work had a tendency to bring the sky down to earth.

“What I was doing over and over again was manifesting outwardly in physical form the universe as it is within,” Holt said in a 2007 interview in Nancy Holt: Sightlines, a retrospective of her work published last year by the University of California Press. 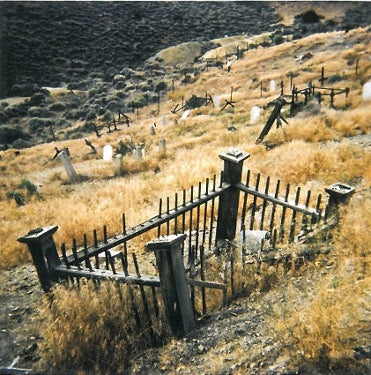 One of a series of photographs in Nancy Holt’s “Western Graveyards” (1968). Photo: Nancy Holt.
Holt, who has received fellowships from the National Endowment for the Arts and the Guggenheim Foundation, among others, says that when she and other artists were bringing the Land Art movement to prominence in the 1960s, there was a sense of creating a new model of art.

“Using the earth, making things right there on the land—it was just so basic. There was such an unconscious need for it that when these works happened, they were immediately absorbed,” she says. “I was in the eye of the storm, and saw how everyone said: ‘Of course! This is it.’ Until it existed, nobody knew it needed to be done.”

In 1975 she completed a very different kind of work, the film Pine Barrens, which moves through the bleak landscape of sand and pines in central New Jersey. It features the sounds of nature, local music and interviews with the few residents who live in the area, though they are never seen on camera. “The psychology of the place comes through in their language, and in the film, the rhythm of their speech counterpoints the visual imagery,” she writes in Nancy Holt: Sightlines.

Getting It on Film

Holt understands the importance of photography, film and video for audiences, both to understand art and to see it in a range of settings.

“Film and video have longevity and make the work available to people who may not come to an actual site,” Holt says. “Now people are also beginning to understand that photographing the work is part of the work and an art in and of itself. I like, for example, to show my pieces through the seasons and in just the right changing light.” 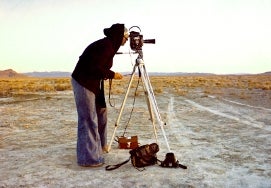 Nancy Holt shoots the film “Sun Tunnels” in 1978. Photo: Lee Deffebach
Her most recent piece, Breaking Ground: Broken Circle/Spiral Hill (1971-2011), is a video chronicling the creation of her late husband Robert Smithson’s earthwork in the Netherlands, which she shot in 1971 and completed this year with a Dutch team in celebration of the work’s 40th anniversary. The video was shown on site in Emmen, the Netherlands, and the Stedelijk Museum in Amsterdam, and is being featured at the Louvre Museum in January.

Though Holt employs many media, there is a thread that connects all her art: the evocation of our inner reality. “It’s like we have a wide consciousness that we can enter into internally,” she says, “and the external vastness of our earth and sky reflect our inner universe.”

Sightlines opens on Jan. 19 in the Tisch Gallery in the Aidekman Arts Center on the Medford/Somerville campus. The public opening reception is on Tuesday, Jan. 24, from 6:30 to 8:30 p.m. Nancy Holt will present a comprehensive slideshow of her career just before the reception, starting at 5:30 in Alumni Lounge. She will be introduced by the exhibition’s curator, Alena J. Williams.