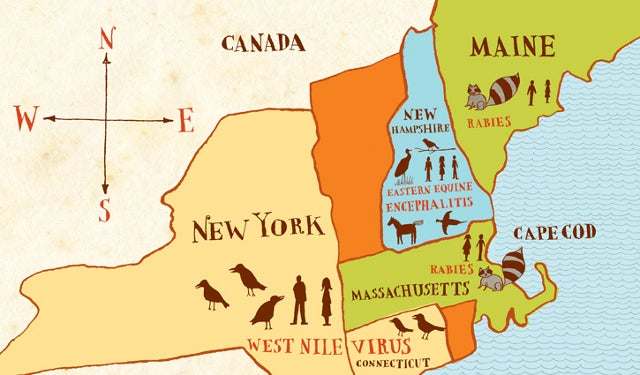 The Northeastern United States is known as a hot spot for infectious diseases that sicken both animals and people. West Nile virus and Lyme disease made their first U.S. forays in the region, and Eastern equine encephalitis and rabbit fever infect wildlife and sporadically claim human lives.

Despite its vulnerability, the Northeast did not have a designated wildlife team to investigate potential disease outbreaks—until the Northeast Wildlife Disease Cooperative was established earlier this year.

Administered through the Cummings School of Veterinary Medicine, the organization pools the expertise of veterinarians, scientists and wildlife managers throughout the region to detect, investigate and manage outbreaks of infectious diseases.

The genesis for the network was the Cummings School’s Seabird Ecological Assessment Network (SEANET), which dispatches volunteers to monitor the welfare of seabird populations along coastal northeastern United States and Canada.

Citizen-scientists combing beaches over hundreds of miles in many states and Canadian provinces can detect patterns of seabird mortality. However, SEANET cannot provide data on disease outbreaks in other species or in other ecosystems, says Julie Ellis, executive director of SEANET.

Scientists decided that the region could dramatically increase its capacity for diagnosing outbreaks of all kinds simply by marshaling the expertise in their own backyard, says Sarah Courchesne, V07, project director for SEANET.

Before, if a wildlife biologist noticed an unusually large number of deaths in a certain population, deer for example, there was one primary option for figuring out what was going on: Ship the carcass to the National Wildlife Health Center in Madison, Wisc., home to the only federal wildlife diagnostic laboratory serving the eastern United States. In short, that’s a whole lot of territory to cover, from Minnesota, south to the Gulf Coast and east to the Atlantic.

The Northeast cooperative will ease some of the burden on the Wisconsin health center by sending dead wildlife to veterinary diagnostic laboratories at the Cummings School, Cornell University, the University of Connecticut and the University of New Hampshire for postmortems and other analyses.

“There’s capacity at the national level, but it’s being stressed,” says Chris Dwyer, a migratory game bird biologist with the U.S. Fish and Wildlife Service, which provided $50,000 to help launch the cooperative. “By pulling together the considerable but scattered expertise within our region, we enable experts working in the field and in the lab to get data to decision makers faster. They, in turn, can keep the public informed about diseases affecting human health or agriculture.”

Your Disease Is My Disease

This kind of collaboration will enable the region’s veterinarians and veterinary pathologists to share their findings and track the movement of disease across state lines. The cooperative will develop a system for responding to and reporting wildlife diseases, including centralized communications and a shared database of verified outbreaks.

Within three years, the cooperative also plans to begin assessing the health of wildlife populations throughout the Northeast to predict the emergence of new diseases before they become widespread.

“Emerging infections can lead to wildlife population exterminations or even species extinction,” says Ellis, citing as one example the fatal fungal disease chytridiomycosis. First discovered in Australia in 1993, chytridiomycosis has been linked to dramatic population declines and even extinctions of frog species on that continent and in western North America, Central America, South America and the Caribbean.

At its core, the wildlife cooperative is a public health initiative. “Humans are animals, too, so whether we are talking about a disease in children, pets or wildlife, we are all interrelated,” says Randy Mickley, a wildlife biologist with the U.S. Department of Agriculture. “Here in the Northeast, we have about a quarter of the nation’s population. With so many people living in such a small area, if a wildlife disease pops up, it’s a very short hop to a large human population or its food supply.”

In fact, 60 percent of the infectious diseases identified between 1940 and 2004 are zoonotic, meaning they first occur in animals, according to a study published in the journal Nature in 2008. The research also found that 70 percent of those diseases originate in wildlife.

Even wildlife diseases that don’t infect us can affect our well-being. Consider white-nose syndrome, a lethal fungal infection in bats that was first identified outside Albany, N.Y., in 2006. While the disease (which gets its name from the ring of white fungus on the muzzle) is decimating bat populations, humans are unscathed.

But the disease is harming “our shared ecosystem,” says Rich French, director of the veterinary diagnostic laboratory at the University of New Hampshire. The only major predator of night-flying insects, bats devour thousands of tons of potentially harmful agricultural pests each year as well as pollinate crops.

If the Northeast Wildlife Disease Cooperative had been around in 1999, perhaps West Nile virus, a mosquito-borne illness, could have been contained before it spread from New York City to neighboring states and then throughout the U.S., says Ellis. When crows began dying and some elderly residents got very sick in Queens, it took public health officials months to connect the dots because the multiple labs involved were not set up to collaborate.

“West Nile virus was finally identified because of the persistence of a veterinary pathologist at the Bronx Zoo,” says Ellis. “If there had been quicker, more coordinated diagnostics offered by a regional lab, the disease may have been addressed much faster.”

This story first appeared in the Fall 2011 issue of Tufts Veterinary Medicine magazine.