Too Much of a Good Thing?

Folic acid in supplements and fortified foods might exacerbate vitamin B12 deficiency, which has been linked to cognitive decline in older adults

When the FDA mandated the fortification of grain products with folic acid in 1996, it resulted in a dramatic 40 to 50 percent decrease in the number of babies born with neural tube defects, one of the most common birth defects. But the protection of our children may have come at the expense of our elderly. High folic acid intake may be harming older adults in ways that the FDA didn’t predict.

Twenty-five percent of people over age 65 don’t get enough vitamin B12, which is critical for brain and neurological system function as well as the production of red blood cells. The folic acid in their daily bread and dietary supplements may exacerbate some of the symptoms of B12 deficiency, including dementia and anemia.

Our bodies don’t produce B12, and so we have to get it from what we eat, including meat, eggs and milk. Older adults have more difficulty metabolizing the vitamin because they produce less stomach acid, which separates B12 from the proteins in food to make it available to the body.

“Although causation cannot be shown, there is a high correlation between [vitamin B12] deficiency and cognitive decline,” says Jacob Selhub, director of the Vitamin Metabolism Laboratory at the Jean Mayer USDA Human Nutrition Research Center on Aging (HNRCA) at Tufts and a professor at the Friedman School. 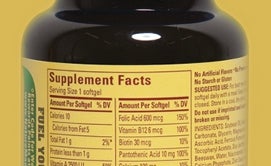 “One recommendation that I would make would be that supplements and fortified breakfast cereals marketed to the elderly have a lower amount of folic acid, if any at all, in them,” says Martha Morris. Photo: Kelvin Ma
So why don’t health-care professionals routinely screen for B12 deficiency in older adults? “Physicians mainly are looking for the symptoms of severe deficiency,” says Martha Morris, a nutritional epidemiologist at the HNRCA.These include a decrease in the number of red blood cells and an increase in their size—a condition known as macrocytic anemia—as well as spinal cord degeneration.

But Morris says there is a good chance that even patients with mild B12 deficiency experience some cognitive problems, which health-care providers may have difficulty distinguishing from the memory loss that sometimes occurs with age.

“The elderly take a lot of supplements, and they consume a lot of ready-to-eat breakfast cereals, which are fortified with folic acid,” Morris says. “The interaction between high folate status and low vitamin B12 status may have negative consequences.”

Morris points to experiments done in the 1940s and 1950s in which B12-deficient patients with anemia were treated with folic acid. While their anemia reportedly improved, their neurological problems got worse, leading the medical profession to recommend against prescribing folic acid to anyone who is B12 deficient. Some scientists now believe that folic acid also makes the anemia worse.

To clarify the relationship between B12 deficiency and folic acid status, Selhub and Morris are conducting epidemiological studies. They have been analyzing data from the National Health and Nutrition Examination Survey, an ongoing study of more than 10,000 Americans, to identify the more subtle effects of age-related vitamin B12 deficiency.

They found that while only about 4 percent of seniors get more folic acid than the FDA recommends (400 micrograms daily), one-quarter of seniors with high folic acid status also have low levels of vitamin B12—that potentially dangerous combination.

Next, they plan to examine the same folic acid/B12 interaction using data from the Framingham Heart Study to determine whether high folic acid status precedes cognitive decline—and therefore is a cause of the problem, not a symptom.

“One recommendation that I would make would be that supplements and fortified breakfast cereals marketed to the elderly have a lower amount of folic acid, if any at all, in them,” Morris says.

Morris also encourages people over age 65 to ask their primary care physicians to test for low B12 or high folic acid levels.

Keep in mind that there is yet no evidence that increasing B12 supplementation improves cognition or prevents mental decline in people who do not have low levels of the vitamin.

This article first appeared in the Winter 2012 Tufts Nutrition magazine.

Amy Scheuerman is a 2010 graduate of the Agriculture, Food and Environment program at the Friedman School.