In the wake of the earthquake last summer, how safe are our older buildings in Boston?

Eric Hines, professor of the practice in the Civil and Environmental Engineering Department, gives us some answers

The magnitude 5.8 earthquake that shook the East Coast on August 23 was the largest seismic event in this part of the country since 1944. The damage was relatively minor, but fallen angels at the National Cathedral and a multitude of building evacuations provided ample drama. Many West Coast experts are satisfied that seismic events on the East Coast are indeed not a threat, especially compared to a repeat of the 1906 magnitude 7.9 San Francisco earthquake.

Nevertheless, the Mineral earthquake—called that because its epicenter was near Mineral, Va.—prompts us to take stock in our preparedness for a major seismic event on the East Coast. While some of our new buildings will not fare well if there is a major earthquake, that doesn’t mean that our engineers have not been working hard to address the problem. Earthquake engineering is a relatively young discipline, and at this point we learn more with each new event. 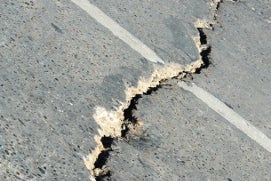 Extensive studies of the Boston area in the 1970s concluded that the chances are small that we will experience a destructive earthquake during our lifetimes, called a 2,500-year earthquake. Photo: iStock

What could we expect from an earthquake in Massachusetts? The magnitude of the largest temblor in Massachusetts history—the 1755 Cape Ann earthquake—has been estimated as high as 6.5, which is 11 times more energy than that unleashed by the Mineral earthquake. Boston was a small city at the time, founded mostly on firm soil, and hundreds of buildings in the city were damaged. A similar or slightly larger earthquake in Boston today could be powerful enough to topple buildings on the large areas of the city that were built on filled swamps to create land.

Extensive studies of the Boston area in the 1970s concluded that the chances are small that we will experience a destructive earthquake during our lifetimes, called a 2,500-year earthquake. Technically, the 2,500-year earthquake is an event that has an approximately 2 percent chance of happening within 50 years. The event itself is obviously not expected to run like clockwork once every 2,500 years. The rarity of such an event implies that while we have a responsibility to protect human life, the return on investment for mitigating property damage would be low.

For this reason, in the 1970s Massachusetts became the only state in a moderate seismic region to adopt provisions to attempt to prevent building collapse for as little additional expenditure as possible. This philosophy differs from the prevailing conceptions of earthquake engineering on the West Coast, where large earthquakes are expected during our lifetimes and money invested in mitigating property damage is well spent.

A little more than 10 years ago, moderate seismic regions in the rest of the country began to adopt standards similar to Massachusetts. In general, this has improved our country’s approach to earthquake preparedness.

At the same time, several new provisions adopted by individual states have contradicted long-standing practices in Massachusetts and raised questions about the fundamental principles on which both sets of provisions are based. For instance, the so-called 2,500-year event is not one event but rather a probability assessed from an agglomeration of more than 50 potential seismic events. Ironically, the latest research implies that an actual event would likely be smaller than our previous assessment of the Cape Ann earthquake. 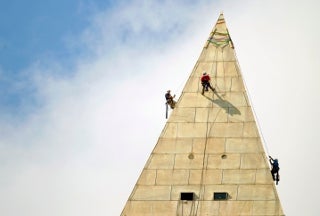 Among the intrepid workers checking the Washington Monument for damage from the earthquake that hit the D.C. area in August was Emma Cardini, E01, G09, who works for the Illinois engineering firm carrying out the inspection. Photo: Evan Vucci/AP Images

In spite of this observation, Massachusetts engineers have insisted on maintaining standards that are consistent with the last 40 years of practice in our state, which assume that we should be designing buildings explicitly to withstand shaking from an event similar to or larger than the Cape Ann earthquake.

Some of the economical design approaches adopted in the 1970s have become significantly more expensive as further research has raised standards. This has prompted designers and owners to seek low-cost alternatives, whose safety can be called into question. These changes in national codes, the construction economy and our increased understanding of earthquake engineering since the 1989 Loma Prieta earthquake near San Francisco have prompted us to rethink our approach to seismic design in Massachusetts. As we engage this process, it is important that we understand the connections between fundamental advances in research and the unique characteristics of our region.

Our structures in Boston are less ductile—they are less able to yield during an earthquake without breaking. We are more concerned with preventing collapse in an extremely rare event than in mitigating economic loss during a frequent event. Our cities are older and have a higher percentage of more fragile building stock.

How do we decide what to believe about an event for which we have almost no data, but which could destroy our city if it actually occurred? We must insist that the scientific and philosophical bases for our practice are the best they can be—which requires a special mixture of intensive thought, discussion and judgment. Theory attempts to understand reality, and practice attempts to assume responsibility for it. Only when we insist on harmony between our understanding and our sense of responsibility can we make good decisions.