Eye Is for Invention 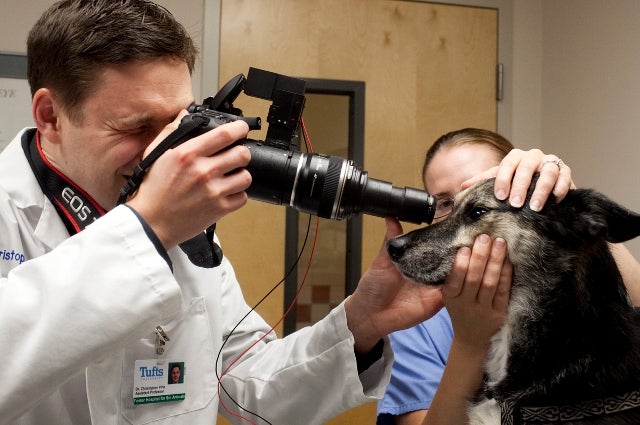 Chris Pirie never fancied himself an inventor. He was busy enough as one of two ophthalmologists at the Cummings School’s Foster Hospital for Small Animals, where he treats patients and teaches veterinary students.

But, as the old saying goes, necessity is the mother of invention.

When it came to assessing the health of the back of an animal’s eye, known as the fundus, Pirie discovered he no longer had the proper equipment. The Foster Hospital has always had a fundus eye camera that clinicians use to monitor the progression of eye disease and how their patients are responding to treatment. But recent advances in digital photography have rendered that diagnostic machine pretty much obsolete.

“You can’t buy film for it anymore,” says Pirie, “and even if you could find the right film somewhere, it’s just as difficult to get the pictures developed.”

So, armed with some introductory books on optical engineering—and a supply of glass, plastic and metal pieces—Pirie sat down at his kitchen table to cobble together a solution. For two years he worked on developing a device capable of producing crystal-clear images. His two dogs and two cats were his coinvestigators, patiently sitting while he examined their pupils to check his progress. Each time an image turned out too blurry, Pirie built another prototype.

“It could be frustrating, but it was also fun,” he says. “[I was] making a colossal mess all over the place, using a hand saw, a router and various other tools. My wife was about ready to shoot me.”

A Camera and a Patent

His patience paid off. He now has a working prototype with the potential to revolutionize digital imaging of the eye in both animals and humans. Instead of building a table-mounted fundus eye camera, he created an adaptor that can be attached to any digital camera. The device offers enormous flexibility at a reasonable cost, because it simply upgrades a tool most veterinary ophthalmologists already own.

“My adaptor does not have the same magnitude quality as the table cameras that cost $80,000. The images you get with those are phenomenal,” Pirie says. “However, the resolution is very good—comparable to most fundus eye cameras on the market—and the adaptor could be manufactured and sold for less than $1,000.”

“With the LCD screen on the back of the camera, you have the ability to immediately show people what’s going on in an animal’s eye,” Pirie says. Photo: Kelvin Ma
To get his prototype to market, Pirie turned to the Tufts Office for Technology Licensing and Industry Collaboration, which helped him secure a patent for his invention and is working to license the idea to a manufacturer. After receiving approval from the Cummings School’s Clinical Science Review Committee, Pirie is using his device to diagnose and treat patients at the Foster Hospital.

One of the clinical applications of his adapter is a technique known as fluorescein angiography, which allows veterinary ophthalmologists to see blood circulation in the retina and detect swelling in the optic disc, tumors and diabetic retinopathy, a common condition that can lead to blindness.

“It’s an imaging modality often used in human medicine,” Pirie says, “but it’s not done too often in veterinary medicine because of the current cost of the equipment.”

The adaptor also helps Pirie to teach pet owners and students about eye disease. “With the LCD screen on the back of the camera, you have the ability to immediately show people what’s going on in an animal’s eye,” he says.

The invention may someday have applications in human medicine by allowing patients without access to an ophthalmologist, such as those who live in remote locations, to be monitored for potential eye problems. With the adaptor, primary-care physicians could use their own digital cameras to photograph a patient’s eyes and email the images to a consulting ophthalmologist.

Pirie’s inventive juices continue to flow. “There are three or four different ideas I’d like to pursue, all along the lines of creating cheaper imaging alternatives,” he says.

This time, though, he won’t encroach on his family’s space. “Last year we bought a house with a basement,” he notes. “That gives me more room for this kind of stuff.”