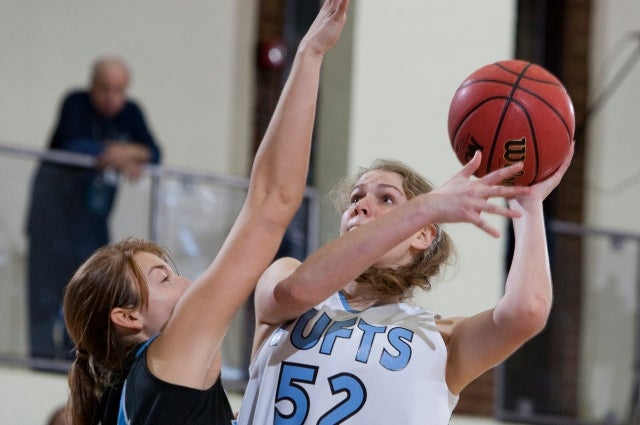 For the second time in team history, the Tufts women’s basketball team will play in the Sweet 16 round of the 2012 NCAA Division III Championship. The Jumbos (23–6) will meet the University of St. Thomas (28-1) in Chicago on Friday at 5:30 p.m. CST.

The team will travel by plane for the first time since late December 2009, when the women played at the Land of Magic Classic in Daytona Beach, Fla. The Jumbos earned their 2012 tickets by winning the opening regional rounds of the NCAAs at home in Cousens Gym on Friday and Saturday, March 2–3. Tufts defeated Misericordia, 61–57, in the first round on Friday night, and then eliminated Johns Hopkins in the second round on Saturday night, 55–46.

In sectional action, the Jumbos head into Chicago as the underdogs of the four teams playing this weekend, according to the D3hoops.com national poll. The Tommies of St. Thomas, in Saint Paul, Minn., are ranked 12th nationally and boast a 28-game winning streak. Undefeated host University of Chicago (26–0) is the number two team in the nation. They will play the other sectional semifinal game on Friday against number five seed Calvin College (27–1) in Grand Rapids, Mich. 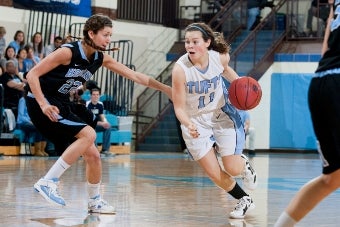 Instead, the Jumbos went 8–2 in the league for second place, and advanced to the final in the conference tournament. Their 23–6 record represents the second-most wins in team history, behind the 26 games won by Berube’s 2007–08 squad. Tufts had its best NCAA finish in 2008, playing in the national quarterfinals at Messiah, losing 55–49.

With their two wins over the weekend, the Jumbos improved to 7–3 overall in NCAA play. On Friday night, guard Tiffany Kornegay, A12, finished with 15 points, 10 rebounds, five assists and three steals in the close win over Misericordia. On Saturday, co-captain Kate Barnosky, A12, led Tufts with 18 points as the Jumbos pulled away from Hopkins late.

According to the St. Thomas website, the Tommies are making their 19th NCAA tournament appearance, and have a 34–18 all-time tournament record. The Tommies won the 1991 NCAA Division III Championship and also had third-place national finishes in 1995, 1996 and 2000.

For links to live streaming of Friday’s game and more information, go here.