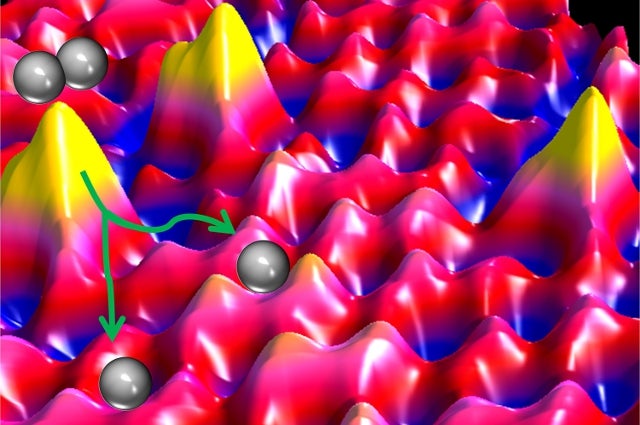 When you hear the word hydrogenation, you might think of Crisco or margarine—plant oils made thicker and more stable by adding hydrogen atoms. In fact, hydrogenation is a key process in a large number of industries, such as oil refining, where it is used to turn crude oil into gasoline.

Hydrogenation happens thanks to the presence of a catalyst—usually a metal, such as nickel or palladium, or an alloy—which allows the hydrogen atoms to bind with other molecules. Typically, metal alloys are mixtures of cheap common metals, such as nickel, and expensive precious metals, such as platinum or palladium. However, it is hard to produce alloys that are selective hydrogenation catalysts, which are able to attach the hydrogen atoms to specific sites on a molecule.

Now scientists at Tufts have found a way to create a selective hydrogenation catalyst by scattering single atoms of palladium onto a copper base. This catalyst requires less of the expensive metal, and the process is greener, too, offering potentially significant economic and environmental benefits.

The team reported its discovery in a paper published on March 9 in the journal Science, a publication of the American Association for the Advancement of Science.

Led by Charles Sykes, an associate professor of chemistry in the School of Arts and Sciences, the group of researchers heated up very small amounts of palladium to almost 1,000 degrees Celsius, or about 1,830 degrees Fahrenheit. At that temperature, the metal evaporated like a gas, so that single atoms were released. These atoms, less than half a nanometer wide, embedded themselves into a copper metal surface about three inches away.

Using a scanning tunneling microscope, which can capture pictures of objects at the atomic level, the researchers verified that single palladium atoms had indeed embedded themselves at scattered intervals in the copper. In a conventional metal catalyst, by contrast, palladium is used in clumps 5 to 10 nanometers wide. This is significantly less economical, since it requires much greater quantities of palladium, which costs more than $650 an ounce. It is less environmentally friendly as well, because of the energy that must be used to extract the additional necessary palladium from raw ore.

The new catalyst also behaves differently, says Georgios Kyriakou, a research assistant professor in chemistry and first author of the report. He helped determine that the single atom alloy was more effective in catalyzing hydrogenation than denser mixtures of palladium and copper.

“In the face of precious metals scarcity and exorbitant prices, these systems are promising in the search for sustainable global solutions,” says Maria Flytzani-Stephanopoulos, the Robert and Marcy Haber Endowed Professor in Energy Sustainability in the School of Engineering, whose lab is studying the effectiveness of the single-atom process. She and Sykes are continuing to collaborate on advancing their research, funded by the National Science Foundation, the U.S. Department of Energy and Tufts Collaborates, a grant program administered by the Office of the Provost.

Flytzani-Stephanopoulos and her group in the School of Engineering are now looking into other approaches to achieve hydrogenation with different metal pairs. She says that eventually single-atom alloy catalysts could be used as low-cost alternatives for hydrogenation and dehydrogenation. That could be a boon for the production of agricultural chemicals, foods and pharmaceuticals.