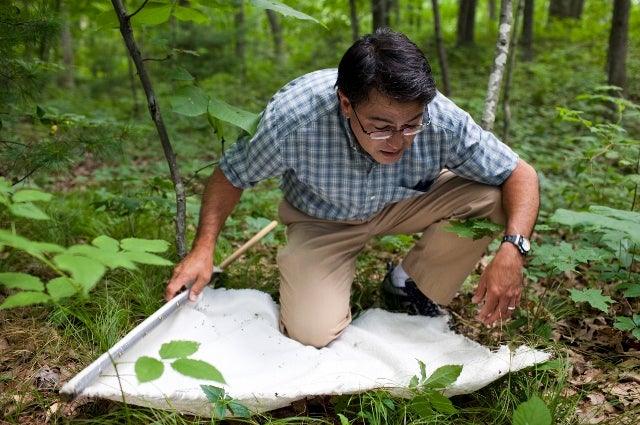 In search of his quarry, Sam Telford stalks the leafy underbrush, wielding what looks like a giant white flag. His prey will surrender to the cloth, called a tick dragger, which allows him to easily spot the sesame-seed-sized arthropods against the white background. In this patch of woodland near Grafton, Mass., Telford counts how many of the deer ticks clinging to his bug-catcher are likely carrying the bacterium that causes Lyme disease.

Despite a significant uptick in the number of reported cases of Lyme over the past decade, efforts to prevent, diagnose and treat it have not achieved large-scale breakthroughs.

Attempts to curb the deer tick population have had limited success. There is no vaccine for humans—although one is available for dogs and horses. And while antibiotics work in many cases, they fail to eliminate symptoms in 10 to 12 percent of those treated for Lyme.

Telford, an expert at the Cummings School of Veterinary Medicine in tick-borne diseases, and the Tufts immunologist Linden Hu are trying to slow—and perhaps even stop—the spread of Lyme disease, which is caused by the bite of a deer tick infected with the bacterium Borrelia burgdorferi.

The scientists have launched their attack on two new fronts: They’re developing a vaccine to kill off the bacteria in the wild and a more accurate way to detect persistent Lyme bacteria in people, a precursor to better treatment.

Lyme disease was first identified in the mid-1970s near Lyme, Conn. Once the spiral-shaped B. burgdorferi bacterium invades the body, it goes undercover, triggering an immune response that can produce symptoms ranging from flu to joint swelling and stiffness.

Undetected, the bacteria can spread and produce totally different symptoms throughout the body. That makes the disease even trickier to diagnose, because those symptoms may—or may not—be caused by the Lyme infection.

The number of reported cases of Lyme disease in the U.S. nearly doubled between 2004 and 2009, when almost 38,500 people were diagnosed, according to the Centers for Disease Control (CDC).

But the real story is even worse, say the government epidemiologists. Because of misdiagnoses and a failure to report, as many as 500,000 Americans could have Lyme disease.

Human encroachment on wildlife habitats, including suburbanization, has caused the explosion in Lyme cases, says Hu, the principal investigator on both the vaccine and bench science projects, who has been studying the disease for nearly two decades.

Seasoned hitchhikers, the deer ticks simply hop a ride as their human taxis brush against bushy undergrowth. Lyme disease has been reported in nearly every state, but 90 percent of all infections occur in New England, the Mid-Atlantic and Wisconsin and Minnesota, according to the CDC. 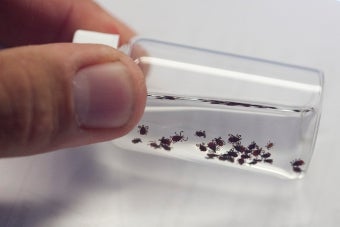 “Right now we have tests that determine the level of antibodies in your blood that are fighting Lyme, but we cannot test for the presence of the bacteria itself,” says researcher Linden Hu.
In some New England communities, efforts to rein in the disease have focused on reducing deer populations through controlled hunts. Despite the deer-tick label, deer don’t get Lyme disease, although they are a primary host for the bacteria-toting ticks. The deer provide the transportation, ferrying infected ticks to new areas.

Telford and Hu, a professor at the Sackler School of Graduate Biomedical Sciences, figured that if they could inoculate mice against the Lyme bacterium, they might be able to break the disease transmission cycle.

Here’s how their vaccine would work: Lyme-infected mice would eat food baits impregnated with the vaccine, causing them to produce an antibody to the disease. A tick that feeds on these mice would also draw up the Lyme antibody, and so, could not be infected. The population of “clean” ticks would grow, while the Lyme-carrying tick population would decline. And if an infected tick dined on a vaccinated mouse, the antibody would kill the Borrelia burgdorferi.

The researchers are planning to load the mouse baits with a genetically modified cow pox virus, similar to the human small pox vaccine, to trigger an immune response against Lyme. The vaccine delivery system borrows from Tufts veterinary school research that used oral vaccine baits to keep Cape Cod free of raccoon rabies in the 1990s.

To determine whether mice would actually go for the baits, Telford did a test run, minus the actual vaccine. He flavored the baits, which look like a two-inch-square granola bar, with peanut butter and then loaded them with a harmless fluorescent dye.

In field trials between April 2009 and June 2010, the baits were placed in 10 mouse nest boxes across two acres on the Cummings School campus. Mice were trapped monthly, and if the rodent had gnawed on the bait, one of their hairs would be marked by a fluorescent band from the dye. The result: More than half of the 85 mice that were trapped had nibbled on the baits.

“So we have a system that will deliver the vaccine with little effort to more than half the mice,” says Telford. He and Hu have applied for funding to conduct the additional field testing required by the U.S. Department of Agriculture for the mouse-baiting program to launch. Potentially, Telford says, the vaccines could cut the infected tick population at least in half, and maybe by as much as 90 percent, “if consistently deployed.”

But what about people who already have Lyme disease—particularly the 10 to 20 percent of patients who continue to experience joint, neurological and other health issues for months, or years, even after several courses of antibiotics?

“Right now we have tests that determine the level of antibodies in your blood that are fighting Lyme, but we cannot test for the presence of the bacteria itself,” says Hu.

In work funded by the National Institutes of Health, Hu discovered that some mice whose Lyme antibodies had dropped to normal levels still had B. burgdorferi in their systems. Because it has already been established that the bacteria are drawn to a tick’s saliva, Hu turned to xenodiagnosis—letting Lyme-free ticks feed and then testing them for the bacterium. His research team was able to detect B. burgdorferi in dogs, mice and monkeys, even after they had received antibiotic treatment for Lyme.

Now he’s using the same method on human volunteers to see whether he can replicate those results and determine how long the Lyme bacterium can remain in the body. Though xenodiagnosis has a high “ick factor,” Hu says it has been used successfully in humans in other instances, such as diagnosing Chagas disease, a parasitic infection that is a major health problem in Central and South America.

However, Hu cautions, much more research needs to occur before biomedical science can proclaim that because people are still infected with B. burgdorferi, that’s the definitive cause of any Lyme-like symptoms they continue to experience. “The first thing is to see if the bacteria are there at all,” Hu says. “This is at least a preliminary step in changing how we think about Lyme disease.”

This story first appeared in the Fall 2011 issue of Tufts Veterinary Medicine magazine.