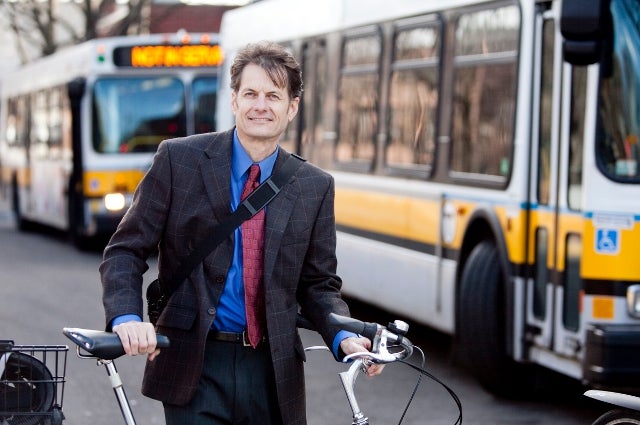 Mark Chase, G97, hasn’t owned a car in 10 years, and he thinks that maybe you could also get by without one, or at least drive it a lot less. The benefits are obvious, he says: less pollution, better health, and more money in your pocket. A lecturer in urban and environmental policy and planning, Chase bikes and takes public transportation—and drives the occasional Zipcar.

That last nod to going green isn’t too big a surprise: his sister, Robin Chase, cofounded the car-sharing service, and he served as the company’s director of business development, designing and implementing its marketing strategy and parking acquisition plan. (Zipcar’s other co-founder is at Tufts, too: Antje Danielson is now administrative director at the Tufts Institute for the Environment.)

Chase is also a consultant for Nelson Nygaard Consulting Associates, where he specializes in parking policies. He served on the board of the Livable Streets Alliance, which urges citizens and their governments to demand a balanced transportation system, and is the founder of Civil Streets, which encourages motorists, bicyclists and pedestrians to be respectful of each other. In addition, he helped his sister launch GoLoco.org, a website that helps people quickly arrange ride sharing.

Tufts Now: How can we encourage people to leave their cars at home and take the bus or ride a bike?

Mark Chase: The most important piece of the puzzle is financial. If people looked at their spending, they’d realize owning a car makes up 20 percent of their budget; it’s right behind housing. According to the American Automobile Association, the cost of owning a medium-sized sedan and driving 15,000 miles a year is $8,588—and that doesn’t even count parking.

The MBTA recently announced a proposal to increase fares while eliminating bus and ferry routes and reducing commuter rail service to offset a $159 million deficit. How do we get more people on buses and trains while cutting services and raising prices?

It’s a difficult problem. In other parts of the world, they look at public transit the way we look at fire, police, streets and emergency response—as something that is essential. It’s considered a baseline service. In the United States, we typically pay for public transportation with taxes, tolls and parking fees. Nobody wants to pay more, but either transit riders pay higher fares or we raise gas taxes or charge more for parking. San Francisco, for example, has a parking tax that helps pay for public transportation.

Isn’t it tough politically to propose raising taxes on gas, especially when the price of gas continues to go up?

Many countries have an item they look at as an important metric of well being. In the Soviet Union, it was bread, so the government kept the price down. In the United States, it’s gas, and we have some of the cheapest in the world. Most people here pay attention to the cost of gas, even though it’s less than 20 percent of their driving cost. It’s really the depreciation of the vehicle and the auto insurance that are more of the cost. Cutting public transportation services is shortsighted because it will encourage many transit riders to shift to driving. Our roads are already clogged. If we can’t move people and goods efficiently our economy suffers. Transit is a central part of an efficient transportation system.

What do other countries do to encourage their citizens to leave their cars in the driveway?

In Copenhagen, the most popular form of transportation is the bicycle. About 37 percent of people ride bikes, 30 percent drive and 28 percent take public transit. So even in a cold, dark country, they have managed to change dramatically how people get around.

How did they do that?

Copenhagen spent 40 years of continually building a bicycle infrastructure that is mostly separated from traffic and makes it comfortable to be on a bike. Even in winter, when biking goes down, the majority of people ride their bikes to work.

In Singapore they have made a conscious effort to make it very expensive to drive and own a car. At the same time, they built one of the best transit systems in the world. In order to drive a car, you have to get a permit by auction. A typical permit is $50,000, and it’s good for 10 years. They distribute permits based on growth of car ownership at 3 percent a year.

How do they deal with traffic in Singapore?

They have congestion pricing. Tolls change depending on how busy the roads are. If you want to save money, you travel at a time when no one else does, so the toll is less, because the demand is less. If there is congestion, the toll goes up. They also charge more for parking than we do.

Why is parking a problem in the United States?

People expect to be able to park for free, and they’ll drive around, looking for somewhere to park, further clogging up the roads and using gas when they could park farther away from their destination and get some exercise.

How can we manage parking better?

Remote parking should be cheap and prime places more expensive. We should think of parking like a chocolate bar: if it’s a valuable commodity, we should be willing to pay a little bit more. We may find that we’re willing to pay to get the chocolate we want. So, for example, a parking spot on Talbot Avenue in front of the Aidekman Arts Center at Tufts might be more expensive than parking at the garage down the street.

You give people a choice based on how much they want to spend. It might be $5 an hour to park at a premium space, but if you’re only going to be there 10 minutes, you might pay a dollar and not mind. But at a garage, you might pay only 50 cents an hour. People will walk an extra 10 minutes if they’re motivated. I encourage businesses to give everyone in their office $50 a month and then charge $50 a month for parking. The people who don’t drive get to pocket the $50.

Why did you start Civil Streets?

Many communities in the Boston area are putting in bike lanes and doing more for bicyclists. A lot of bicyclists obey laws, but you really notice the ones who don’t. There’s road rage out there, but there’s also mode rage: whatever mode you’re traveling on, you’re angry at the other mode. Civil Streets encourages people to relax, take a deep breath and be nice to each other while we all share the streets in our neighborhoods.