Humanitarian, author and Navy SEAL and four others will receive honorary degrees at May 20 ceremony

After graduating from Duke University in 1996, Greitens received a Rhodes Scholarship and a Truman Scholarship. He earned a master’s degree and a Ph.D. from the University of Oxford, focusing his doctoral research on how international humanitarian organizations can best serve children affected by war.

Greitens’ award-winning book of photographs and essays, Strength and Compassion (Leading Authorities Press, 2008), grew from his humanitarian work as a volunteer, documentary photographer and researcher in Albania, Bolivia, Cambodia, Croatia, the Gaza Strip, India, Mexico and Rwanda. The book was honored as ForeWord Magazine’s Photography Book of the Year and as the grand prize winner in the 2009 New York Book Festival. Greitens’ second book, The Heart and the Fist: The Education of a Humanitarian, the Making of a Navy SEAL, became a New York Times bestseller last year.

As a Navy SEAL officer, Greitens was deployed four times to Iraq, Afghanistan, the Horn of Africa and Southeast Asia. He has served as the commander of a Joint Special Operations Task Unit, commander of a Mark V Special Operations Craft Detachment and commander of an al Qaeda Targeting Cell. For his service, Greitens was awarded the Navy Achievement Medal, the Joint Service Achievement Commendation Medal, the Combat Action Ribbon, the Purple Heart and the Bronze Star. 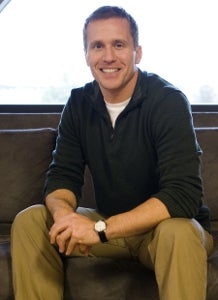 Eric Greitens
After returning from Iraq, Greitens donated his combat pay to found The Mission Continues, a national nonprofit that challenges veterans to serve and lead in communities across America through six-month fellowships at community nonprofit organizations. In 2008, Greitens received the President’s Volunteer Service Award for his work with the organization. His work as CEO of The Mission Continues earned him a fellowship from the Draper Richards Foundation and recognition by the Manhattan Institute for Social Entrepreneurship as one of the five leading social entrepreneurs in America.

“As a scholar, author, civic leader and Navy SEAL, Eric Greitens has demonstrated how an individual passion for service can be a powerful force for good with an impact far beyond its original sphere,” says President Anthony P. Monaco. “We seek commencement speakers whose lives will inspire our graduates and model achievement for our entire community. Eric Greitens exemplifies that. I am particularly pleased that his name was among those suggested by our students to the honorary degree committee of the Board of Trustees.”

At commencement, to be held at 9 a.m. on the academic quad of Tufts’ Medford/Somerville campus, Greitens will receive an honorary doctor of humane letters degree. Four other distinguished men and women will also receive honorary degrees:

Lawrence S. Bacow is president emeritus of Tufts University and currently president-in-residence in the higher education program at Harvard University’s Graduate School of Education. An innovator in education, Bacow is recognized for advocating broad-based access to higher education, need-based financial aid and increased civic engagement among universities worldwide. He will receive an honorary doctor of humane letters degree.

Bonnie Bassler is the Squibb Professor and Howard Hughes Medical Institute Investigator in the Department of Molecular Biology at Princeton University. Her discoveries about quorum sensing, the process by which single-cell bacteria communicate with each other, launched a revolution in biological and medical research. Tufts will award her an honorary doctor of science degree.

Cecilia Ibeabuchi is nurse manager of the Boston Health Care for the Homeless Program clinic at St. Francis House, which provides the poor and homeless with vital services to enable them to reclaim their dignity and rebuild their lives. She is a tireless worker on behalf of some of Boston’s most vulnerable citizens. She will receive an honorary doctor of public service degree.

Farooq Kathwari is chairman, president and CEO of Ethan Allen Interiors Inc. He has devoted time and energy to humanitarian work as a director and former chair of Refugees International and as a member of the Council on Foreign Relations, among others. His leadership on behalf of global peace and intercultural understanding has been recognized with the U.S. government’s Outstanding American by Choice Award, among other honors. Tufts will award him an honorary doctor of public service degree.