Just 21 percent of applicants are offered admission to the undergraduate Class of 2016, as Tufts remains a destination of choice 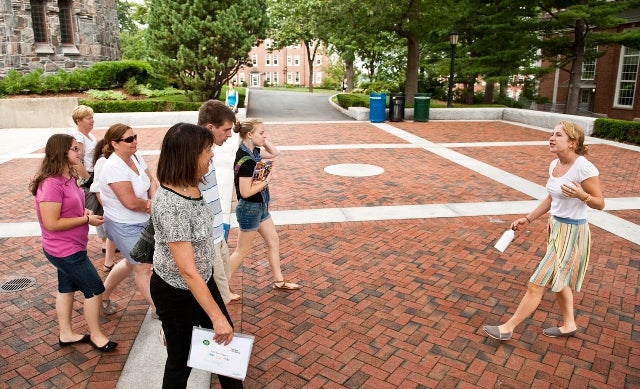 The Class of 2016 in the schools of Arts and Sciences and Engineering will be the most selective in Tufts’ history, thanks to a record-low acceptance rate amid a strong applicant pool.

Just 21 percent of the 16,378 applicants to the undergraduate class received the nod late last month. It is the third consecutive year in which the acceptance rate has declined, in keeping with a national trend that has seen acceptance rates dip as students apply to more colleges.

The School of Engineering had 2,769 applicants, the sixth consecutive year of record numbers. Tufts has stepped up its recruiting efforts for engineering students in the last few years, including hiring two additional staffers to focus on the school.

Dean of Admissions Lee Coffin said some of the impressive numbers are the result of concerted recruiting efforts overseas and in California, regions that saw increases in both applications and acceptances. The top foreign countries for accepted students are China, Singapore and India.

Slightly more than half of the class applied for need-based financial aid, the same as last year. Tufts has budgeted a record $15.9 million in need-based aid for the incoming undergraduates.

Roughly 10 percent of those accepted are first-generation college students, up from 8 percent last year. Some 55 percent of accepted students attend public school, the same as last year.

The admitted class set or matched many records for academic achievement. Some 93 percent of admitted students whose schools ranked them will graduate in the top 10 percent of their class, up from 92 percent last year. SAT scores were strong, too. Averages for critical reading were 724, up from 722; math was 729, up a point from last year, while writing was 730, the same as last year. For students admitted to the School of Engineering, the average math score was 759, also a new high. The mean ACT composite was 32, tying last year’s record.

Accepted students have until May 1 to make a deposit, letting Tufts know that they will be here in the fall. Coffin anticipates a class of 1,300 students.