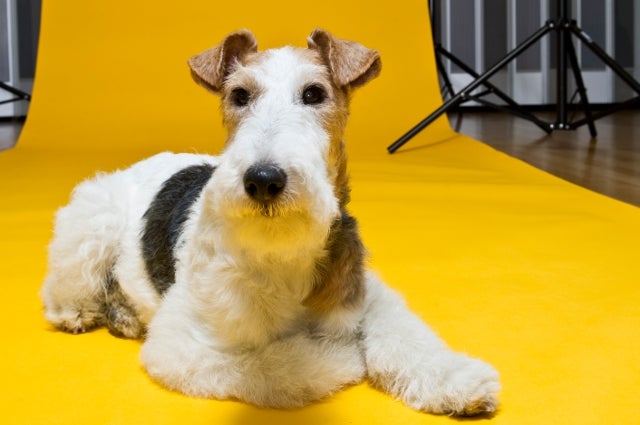 An award-winning career. A triumphant return from retirement. A battle with a life-threatening illness. A starring role in a film that’s getting Oscar buzz.

In her 10 years, Bella, a wirehair fox terrier, already has seen enough drama to warrant her own sensational tell-all on the E! television network.

“I fell in love with Bella at first sight,” says Lucia Hackett of the retired show dog she purchased from a breeder. Bella (or Ch Hiwire Act at Hexham CD RE SE CGC, as the title-winning terrier is officially known) and Hackett began obedience work and soon started showing, this time in the veterans’ ring.

“I couldn’t believe Bella was so sick,” says Hackett, who lives in North Grafton, Mass. “I love this dog, and I never want to see her suffer.”

Rob McCarthy, V83, a veterinary surgeon at Tufts, removed the tumor and two lymph glands, one of which was malignant. Five days later, Bella was back home.

“I didn’t want her climbing stairs, so I decided to sleep with her on the kitchen floor,” says Hackett. “Later that night, she came to lick my ear. Her tail was wagging, and I think she was saying, ‘I’m home.’”

Determined to be optimistic about Bella’s recovery, Hackett submitted some photos of her pet to a casting call posted online for a new Wes Anderson film.

Anderson, who received Academy Award nominations for The Royal Tenenbaums and The Fantastic Mr. Fox, cast Bella in his seventh movie, Moonrise Kingdom.

Four weeks after her surgery, Bella was on set in Newport, R.I., with the actors Bill Murray, Bruce Willis and Tilda Swinton. The film, about two runaways, opens May 25. It’s already garnering Oscar chatter.

Far from the glare of Tinseltown, Hackett is content to simply enjoy more time with Bella: “I hug her especially tight each day.”

Watch a trailer for the movie here.