By now, there’s scientific consensus that our universe exploded into existence almost 14 billion years ago in an event known as the Big Bang. But that theory raises more questions about the universe’s origins than it answers, including the most basic one: what happened before the Big Bang? Some cosmologists have argued that a universe could have no beginning, but simply always was.

In 2003, Tufts cosmologist Alexander Vilenkin and his colleagues, Arvind Borde, now a senior professor of mathematics at Long Island University, and Alan Guth, a professor of physics at MIT, proved a mathematical theorem showing that, under very general assumptions, the universe must, in fact, have had a beginning.

Since that discovery, others in the field have countered with alternate theories describing other kinds of universes where the Borde-Guth-Vilenkin Theorem, as it is called, would not apply. Vilenkin, a professor of physics and astronomy, and graduate student Audrey Mithani, G15, used mathematics to examine three potential logistical loopholes in the 2003 theorem, strengthening their original premise that the universe did, in fact, begin. The first two loopholes were already addressed in the theorem. The goal of the article was to take care of the third loophole. The article—posted to the online math and science forum hosted by Cornell University called arXive—garnered coverage in non-science publications, including the U.K.’s Daily Mail and Fox News’ web site, and sparked new debates about the beginning of the beginning.

Tufts Now: What are the main theories of the universe that you considered?

Alexander Vilenkin: We looked at three possible scenarios—all of which, by the way, were suggested by the ancient Hindus 3,000 years ago.

In one scenario, which the Hindus called “the eternal universe,” multiple beginnings are happening in different places. In scientific cosmology, this more or less corresponds to an idea called eternal inflation. In this case, the universe is expanding very fast, and then Big Bangs happen here and there. These Big Bangs are localized, in bubbles. As these bubbles—each containing a discrete universe—are driven apart, space opens up between them, where new bubbles are created. We live in one such bubble. [All of these universe-containing bubbles make up what cosmologists call the multiverse.]

Another idea is a cyclic universe, one that expands, collapses and then starts over again.

The third possibility, and the main focus of this paper that I wrote with my student, Audrey Mithani, is the emergent universe, a static universe that sits forever and then somehow bursts open and starts expanding. The Hindus called this “the cosmic egg.” You need some mechanism that will trigger this event, but that’s doable. 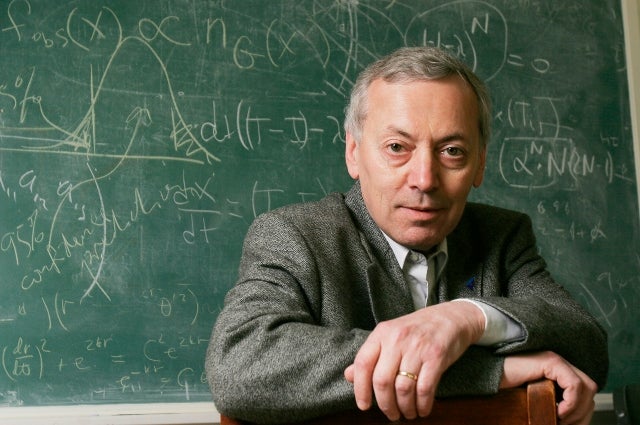 “I cannot really claim that I understand the beginning of the universe,” says Alex Vilenkin. “We have a picture which kind of makes sense, which I think is an achievement.” Photo: Jodi Hilton

How were you able to rule out the first two scenarios?

For the eternal inflation model, what we can show mathematically is that there is no end to this process. Some people thought maybe you could avoid a beginning, too. But our 2003 theorem shows that [avoiding a beginning] is impossible for this scenario. Although inflation may be eternal into the future, it cannot be extended indefinitely to the past. So that was that.

One hypothesis about a cyclic universe avoids this problem of thermodynamics, though. There are models of a cyclic universe in which the volume grows in every cycle. This way, the universe expands and contracts, but contracts to a larger volume than in the previous cycle. So even though disorder increases, disorder per unit volume doesn’t change.

That’s possible, but then our 2003 theorem poses a problem because if the volume of the universe grows, then there must have been a beginning. So the cyclic universe scenario doesn’t avoid a beginning either.

And the cosmic egg?

There are classical physics models for this static universe to sit there forever and then suddenly start expanding. But what we showed is that, quantum mechanically, this universe is not stable. [Quantum mechanics is the branch of physics that describes the behavior of sub-atomic particles and assigns probability to events.]

For example, in classical, or Newtonian, physics, if you put a ball in a cup, it will not get out. It will sit there forever. But quantum mechanically, objects can tunnel through. If I sit here long enough, there is some probability I will tunnel through this wall, and then I will be in the corridor. Of course the probability is very small, but it is “non-zero.”

Does your theorem have any detractors?

There was a lot of debate about this. Most recently, Leonard Susskind of Stanford posted a paper to arXiv in which he said, even though the theorem is mathematically correct, if eternal inflation goes on forever, how likely is it that we are living right near the beginning? If inflation is eternal to the future, we are most likely to be very, very far from the beginning. And if we live very, very far in the future from the beginning, then almost all traces of the beginning are erased from our surroundings. So, says Susskind, we cannot really detect anything about the universe’s origins observationally.

Since then, we had some discussions, and he [Susskind] posted a second note to arXive saying, actually, not all information about the beginning of the universe is erased. There are some indications that, in principle, evidence about the beginning could be observed.

Some people claim your work proves the existence of God, or at least of a divine moment of creation. What do you think?

I don’t think it proves anything one way or another.

I went to a meeting of some theologians and cosmologists. Basically, I realized these theologians have the same problem with God. What was He doing before He created the universe? Why did He suddenly decide to create the universe?

For many physicists, the beginning of the universe is uncomfortable, because it suggests that something must have caused the beginning, that there should be some cause outside the universe. In fact, we now have models where that’s not necessary—the universe spontaneously appears, quantum mechanically.

In quantum physics, events do not necessarily have a cause, just some probability.

As such, there is some probability for the universe to pop out of “nothing.” You can find the relative probability for it to be this size or that size and have various properties, but there will not be a particular cause for any of it, just probabilities.

So how do you think the universe began?

I cannot really claim that I understand the beginning of the universe. We have a picture which kind of makes sense, which I think is an achievement. Because, if you think about it, you say, “OK, what happened before the Big Bang, before inflation?” It seems you can keep asking these questions and the answer is impossible.

But this quantum creation from “nothing” seems to avoid these questions. It has a nice mathematical description, not just words. There’s an interesting thing, though; the description of the creation of the universe from nothing is given in terms of the laws of physics. That makes you wonder, where are these laws? If the laws describe the creation of the universe, that suggests they existed prior to the universe. The question that nobody has any idea how to address is where these laws come from and why these laws in particular? So there are a lot of mysteries to keep us working.