Tuberculosis, the disease you thought was history, continues to be a scourge across much of the world 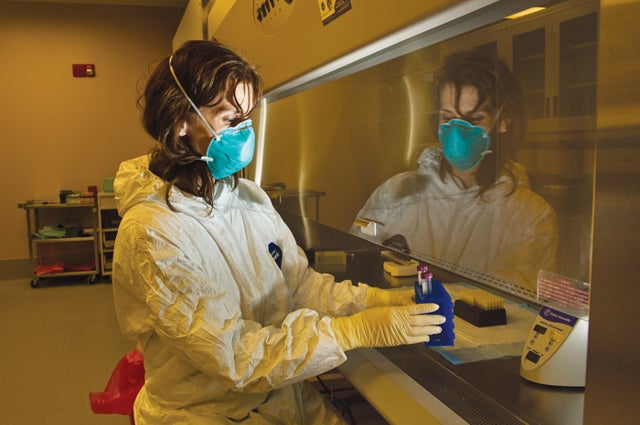 When we hear the word “tuberculosis,” we’re likely to think of a plague from the Middle Ages, or a poet dying of consumption in 19th-century Paris. Despite the perception that TB is a thing of the past, however, the contagious bacterial infection continues to have devastating consequences in much of the developing world.

Tuberculosis now infects one-third of the entire human population, resulting in as many as 9 million new cases and 1.7 million deaths each year, according to the latest figures from the World Health Organization. Thankfully, 90 percent of people infected with the tuberculosis bacteria never contract the disease. Still, doctors and biomedical researchers are working to understand why some humans develop TB while others do not.

“That’s the magic-bullet question,” says Gillian Beamer, an assistant professor of biomedical sciences at the Cummings School of Veterinary Medicine at Tufts. She is leading a research program to study the disease, focusing on two genetically different strains of mice—one that contracts TB when infected, the other that doesn’t. 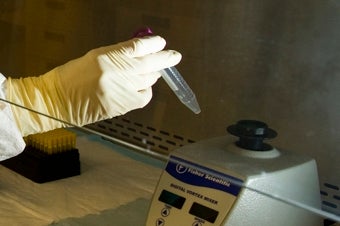 Gillian Beamer is trying to answer the “magic-bullet question” about why some people get tuberculosis and others don’t. Photo: Alonso Nichols
“I focus on how the [animals’] immune response fights the bacteria,” as well as the differences in TB-resistant and TB-susceptible mice, she says. “Someday, hopefully, the information can translate to humans.”

The bacterium that causes the disease, Mycobacterium tuberculosis, spreads through the air and can infect any organ in the body, though it is most commonly found in the lungs. Once inside the body, it burrows deeps into cells, including the infection-fighting white blood cells. When TB infection occurs, nodules called tubercles or granulomas form. Patients lose weight and energy and develop a persistent cough—eventually coughing up bright red blood before succumbing to the disease.

Tuberculosis has plagued humans since the Stone Age, and evidence of infection has been found in Egyptian mummies. In the Middle Ages it was known as the “white plague,” and in the 18th and 19th centuries it was the cause of a quarter of all deaths in the Western world. In the 1940s and ’50s, however, the availability of antibiotics and a new vaccine, effective in children, sharply curtailed TB outbreaks.

“It was brought under control to a great extent and almost vanished from the population,” says Saul Tzipori, director of the infectious diseases program at the Cummings School. Assuming that TB was history, doctors stopped administering vaccines and declared victory.

But when HIV/AIDS emerged in Africa in the 1980s, TB re-emerged right alongside it, preying on the weakened immune systems of those with the human immunodeficiency virus and acquired immune deficiency syndrome.

“HIV/AIDS created a whole new pool of susceptible individuals,” says Tzipori, holder of the Agnes Varis University Chair in Science and Society at Tufts. “The microorganism stays dormant in most people, but flares up mostly because of a change in the immune status of the host.” Even that connection is unclear, however, because the majority of TB patients don’t have HIV. “Quite often there is no clear indication” for who develops TB, says Tzipori.

When the New England Regional Biosafety Laboratory opened on the Cummings School campus in 2009, studying TB became a priority. Tufts recruited Beamer, who did her doctoral research on the disease at Ohio State University, where she looked at the amounts of certain cell-produced proteins that seem to control whether mice are more susceptible to TB. One of them, called interferon gamma (IFNg), appears to help the body fight TB by “turning on” white blood cells to make them more powerful combatants. Another protein, called IL-10, seems to have the opposite effect, shutting down the immune system instead of stimulating it.

The research may help identify who in a population is susceptible to TB and who isn’t. “A blood test could be developed to identify some kind of marker for protective immunity, and these are active areas of research by many investigators,” says Beamer.

That could help physicians determine which patients would benefit from the antibiotics used to treat TB. The antibiotic course currently prescribed is extremely complex and expensive, consisting of multiple pills taken multiple times a day for six to nine months. Targeting their use to those most susceptible could help save resources, reduce side effects for patients and cut down on antibiotic-resistant strains of TB that recently have begun to emerge.

Though humans are much more complex than the mice Beamer studies in her lab, it makes sense for a veterinary school to be conducting this research. “To me, humans are just one other animal,” says Beamer, who earned her V.M.D. at the University of Pennsylvania. “The specific protein reactions that happen in a cell can be different, but in a broad way, what happens on an animal level is very similar.”

As a veterinarian with expertise in animal anatomy, physiology and cell biology, Beamer says she has “been trained to evaluate the entire animal, so I have a slightly different perspective than people who don’t have that training.”

Beamer wants to expand her research to look more closely at what happens to individuals when they progress from a controlled infection to an active stage of TB. Her efforts could help in the global fight against the disease that includes attempts to develop a more effective vaccine, new antibiotics to target specific strains of TB and less-invasive diagnostic tests such as using spit instead of drawing blood.

“Despite the many labs around the globe that are working on TB, there is still some basic information that is missing,” says Tzipori. “If we can generate a better understanding about what happens between the host and the bug, then we can devise better measures for control.”

While those measures may be a ways off, the Tufts researchers are contributing to a multipronged attack designed to make TB history once again.

Michael Blanding is a freelance writer based in Boston.